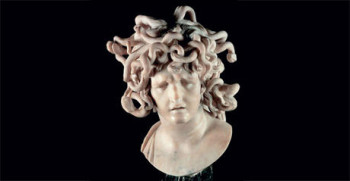 I may ramble on a bit this week, and I apologise in advance. You see, I have a deep attachment to Medusa. She’s the center feature of the aegis tattoo I have on my right arm. My doctoral dissertation (which I do not recommend anyone read) was entitled Medusa’s Blood because of its discussion of a lot of what I’ll cover today. And, fittingly, a review of Clash of the Titans was the first thing I ever wrote for Black Gate, a handful of years back.

Most of us know Medusa from Clash of the Titans. Hopefully the 1970s version because the newer one is pretty terrible. In any case: she’s easily recognized. Scary looking woman, snakes for hair. Turns people into stone when they look at her. Came to bloody, hero-induced end. But what we learn from Ovid is that Medusa was not always a Gorgon. In her youth, she was one of the most beautiful human women alive.

Until she was raped by Neptune.

Critically, she was raped by Poseidon in the temple of Minerva. It is upon this event that she became a monster and her hair was turned into snakes. In response, the goddess turned Medusa into the creature we all know. The most common reading is that she did this to punish the victim of the crime, but the Latin doesn’t actually say this. Instead, Ovid says that Minerva acted so that this deed would not go unpunished. 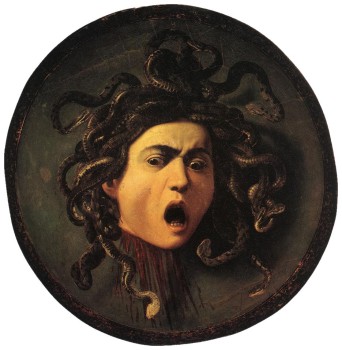 Given the example of Caeneus (who was ‘gifted’ with being both male and impenetrable upon rape by Neptune), we can also see Medusa’s transformation as protective. Medusa not only lost the beauty that made her a target of unwanted attention, she gains the ability to destroy whoever turns his gaze upon her. This interpretation is suggested even more strongly in a later writer, Lucan. If you’re not a Classicist or Medievalist you’ve never heard of him, although you should really consider looking him up if you like the horror genre. Which he helped invent with scenes of such amazing gore content that they were unparalleled until Quentin Tarantino came along. He describes Medusa as having made friends with her hair. She treats them as pets, loving the way they hiss while they, in turn, nuzzle her face in affection.

With both Caenis/Caeneus and Medusa, Ovid is showing the reader something about survivors of sexual abuse and assault: that with an attack of this nature often comes a desire for invulnerability, for a severance from conventional femininity and conventional attractiveness, for revenge. These are by no means universal experiences – there is no universal experience for survivors of sexual assault. But they are very common reactions. But while the story of Caeneus shows how an individual can move on and rebuild a life after a traumatic event, the story of Medusa is in many ways about what happens when someone becomes completely locked in by trauma.

Defense mechanisms can become prisons. And in Medusa’s case that is precisely what happens. She is completely cut off not just from further injury but from any human contact. From any contact with any other living thing, save the Gorgons – she even petrifies plants and animals. She is completely and utterly isolated. Even after her death, the blood that drips from her head sprouts poisonous snakes. This is, Ovid tells us, why North Africa is populated with so many poisonous species of serpents: when Perseus was flying back to rescue Andromeda, Medusa’s head continued to drop blood, breeding asps and vipers and cobras along the way.

The consequences of rape are not constrained to the individuals involved. They act like a virus, spreading and contaminating entire communities. Medusa’s tale may be a good bit less inspiring than Caeneus’, but it also provides a valuable example of a way that one can write about sexual assault without exploiting either the crime or the victim.

Next week we’ll take a break from such weighty subjects as I recap What I Saw At WisCon. If you were there too, I hope you’ll chime in!

I’ve never thought of Medusa’s curse as a protective gift before. Intriguing.

Neptune had butt ugly children. Polythemus must not have fallen too far from the tree because Neptune is a troll of a god.

I read only the Perseus myth about Medusa and I didn’t know about her origins until a few years ago. Then I looked at her like a tragic figure instead of a monster.

Wild Ape – Well, there are all the sea nymphs. And Pegasus. He’s not the worst out there.

Pegasus obviously takes after his mother pre-Gorgon looks. Honestly, I can’t prove it but I have my doubts that Pegasus is truly Posiedon’s own.

I did not know that sea nymphs were Posiedon’s. They aren’t so bad.

I say this all because I am a trusty Shellback. I found the worst part of the initiation to be Neptune’s Baby. I shudder to think on that day. Perhaps this is where I draw my angst.