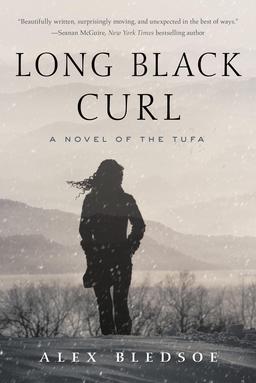 The first volume in Alex Bledsoe’s Tufa series, The Hum and the Shiver, was named one of the Best Fiction Books of 2011 by Kirkus Reviews. The second, Wisp of a Thing, was called “A chilling mix of fantasy, realism, and a touch of horror” by Booklist. The long-anticipated third volume in the series finally arrives this week.

In all the time the Tufa have existed, only two have ever been exiled: Bo-Kate Wisby and her lover, Jefferson Powell. They were cast out, stripped of their ability to make music, and cursed to never be able to find their way back to Needsville. Their crime? A love that crossed the boundary of the two Tufa tribes, resulting in the death of several people.

Somehow, Bo-Kate has found her way back. She intends to take over both tribes, which means eliminating both Rockhouse Hicks and Mandalay Harris. Bo-Kate has a secret weapon: Byron Harley, a rockabilly singer known as the “Hillbilly Hercules” for his immense size and strength, and who has passed the last sixty years trapped in a bubble of faery time. He’s ready to take revenge on any Tufa he finds.

The only one who can stop Bo-Kate is Jefferson Powell. Released from the curse and summoned back to Cloud County, even he isn’t sure what will happen when they finally meet. Will he fall in love with her again? Will he join her in her quest to unite the Tufa under her rule? Or will he have to sacrifice himself to save the people who once banished him?

Alex Bledsoe is also the author of the Eddie LaCrosse novels (The Sword-Edged Blonde, Burn Me Deadly, Dark Jenny and Wake of the Bloody Angel), the novels of the Memphis vampires (Blood Groove and The Girls with Games of Blood), and Sword Sisters: A Red Reaper Novel, written with Tara Cardinal (read a sample chapter here.)

My copy arrived yesterday. Just need to catch up with one of the tor.com short stories first.

Splendid… let us know what you think!