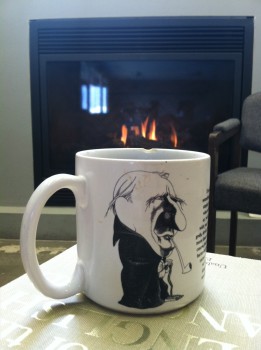 I’ve been drinking coffee from this mug since way back in the twentieth century. It was a gift, of that I’m pretty sure, but I’ve had it so long I can no longer tell you who I got it from or when.

It survived my first marriage, a move from Arizona to Minnesota and several subsequent moves all over the Land of 10,000 Lakes, and being left through one brutal winter in a cow pasture (I lost it on a walk late in the fall; the following spring it was still there where I’d left it, sitting on the hood of a rusted old jalopy!).

It is a little worse for wear — a chip on the rim and another one on the base. The litho, though — incredibly — is pristine and unfaded, even though it’s been through hundreds of cycles in the dishwasher.

The caricature of Tolkien as a hobbit, which is repeated on either side of the mug, was done by Steven Cragg. The text, which is attributed to “Largely Literary Designs, Inc.,” reads as follows:

Ever since we were no bigger than a billiard ball we’ve wanted something important we could call our own — a yacht, for example, or a cottage in the Bahamas, or a marriage counselor who could go an entire hour without saying the word “feelings,” or, well, a mythology of Middle-Earth, to be perfectly honest with you, a unique vision of history and pre-history, good and evil, gods, devils, the whole shebang, the sort of thing J.R.R. Tolkien devised more than a half a century ago, which means we’re lucky as Frodo, of course, because thanks to modern printing technology and a newfangled bartering system called “money,” we now need go no further than our corner bookstore, pick up a copy of The Hobbit and suddenly we’re there, chucked head over heels into Tolkien’s magical kingdom, thankful that when our own world becomes too much for us, we can always turn to his. 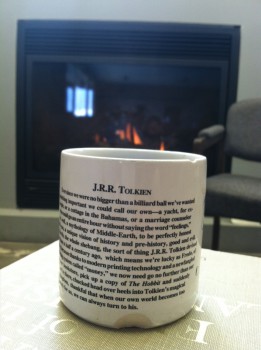 I probably noticed it before at some point, but a fact I’d forgotten until typing this out just now: that paragraph is all one sentence. Whew.

To be honest, I didn’t particularly care for the text. Parts of it resonated, but I was annoyed by some of the specifics — yachts and the Bahamas and all that. But it has grown on me over the years.

The mug, by Largely Literary Designs, Inc. of Chapel Hill, North Carolina, was made in Korea.

I could not locate a website for this corporation, nor could I locate this particular mug on eBay or Amazon; so, alas, I cannot tell you how you might procure one of your own.

…I wonder if its primarily tea/coffee lovers that become particularly attached to mugs? Years ago, and now sadly lost, I had a Larson “Far Side” mug with a single panel of two cowboys faced off in a saloon, each bug-eyed with quivering armss…holding cups. The text was something like:

“Hour after hour, cup after cup, the two men tested their caffeine limits in a traditional contest of the old west.”

Miss that mug to this day!

My wife got me a Doctor Who mug for Christmas last year. It had a litho of empty space on the side — until you filled it with hot coffee: then the TARDIS appeared! Really, really cool…until I foolishly ran it through the dishwasher. The magical lithograph peeled almost completely away, and the mug was consigned to the trash bin — until I can travel back in time to just before I put it into the dishwasher and rescue it.

Because let’s face it, at the end of the day, when the caffeine has faded, any totaller will lovingly place their mug in the top rack of the dishwasher 🙁

Some 30 years later, their are apparently 25 PAGES of Larson Far Side mugs on eBay…even found my Cowboy/Caffeine mug, but at $15, it’ll have to wait.

“…I wonder if its primarily tea/coffee lovers that become particularly attached to mugs?”

It’s not just tea/coffee drinkers. A friend of mine made me a leather 25oz beer mug that I could never part with.

I’ve been a HUGE Far Side fan since the ’80s when I was in junior high. Grew up reading them in the daily paper, along with Calvin & Hobbes. Cut-out Far Side cartoons were a staple of our refrigerator.

The potential attachment to beer mugs or steins occurred to me as well. I thought about the leather mugs folks cart around like Holy Grails at the Ren Faires.

I suppose one could develop a fond attachment for a hip flask as well. I have a nice flask that my wife bought me at the Ren Faire — it has a Celtic knot design and a little shot-cup in the center that pops out in case, for some reason, you wanted to share your whiskey but not swap swigs straight from the flask.

Thing is, I hardly ever carry a flask around, so it’s stuck away in a pantry somewhere. Maybe I should. I’ve never been really clear on the law about flasks. If you have one on you, is that considered an open liquor bottle?

“If you have one on you, is that considered an open liquor bottle?”

Probably. But that’s never stopped me from bringing one just about anywhere I want. A warning though: sipping from one, in just about any public place, will garner some uncomfortable looks. Many of them appear hostile, offended, or condemnatory.