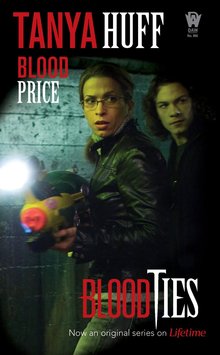 The great thing about the people in Tanya Huff’s Blood Books is that they act like… well, like people. This is remarkable for two reasons. First, not all of them are people; second, not all authors allow their characters to act like themselves all the time. Huff insists on it. Even when it makes writing the story difficult.

Let me qualify. All the characters in the Blood Books are people. Not all of them are human. They do act like themselves all the time, which isn’t to say that they act the way you expect them to. Not at all. More often than not, they’ll surprise you. But they’ll surprise you in a way that makes you go “Oh! Wow!” And not in a way that makes you go “Huh? What?”

The human protagonist, Vicky Nelson, was an extremely successful police detective, the kind who doesn’t suffer fools, and therefore doesn’t make a lot of friends among her peers. When she develops night blindness, she has two options, take a desk job, or leave the force. Being who she is, she chooses to leave the force and start her own detective agency. She’s stubborn, arrogant, and strong – exactly the kind of person you’d need if you were in trouble. Immanent blindness doesn’t change that.

The vampire protagonist, Henry Fitzroy, is the Duke of Richmond, the bastard son of Henry VIII. He doesn’t act like a young man living at the end of the 20th century. He acts like the son of a king, who’s been around for 450 years, has actually lived through all the changes that took place in those years, and who subsequently knows how to pretend that he’s a man living in the 1990’s. He’s a vampire, but he’s also the son of a powerful king, so for him, “territory” always has two meanings. 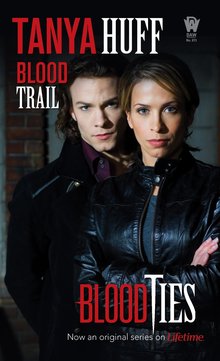 As for how their paths cross, or the plotlines of any of the five books in the series, I’ll leave you to discover that for yourself. I will point out that it’s characteristic of both Huff’s imagination and her sense of whimsy that she conceived of a person with night blindness and a vampire teaming up to be private detectives.

The Blood Books have been described as one of the first, if not the first, vampire detective series, and as “police procedurals with vampires.”  While the books can certainly be enjoyed by those of us who like our fantasy mixed with crime, Huff is one of the pioneers of the vampire-as-hero genre, and she never loses sight of the walking undead’s origins in horror.

In fact, it’s one of the Blood Books strengths that it was conceived as a limited, not open-ended, dark fantasy or horror series. Huff’s original plan was to write four novels, each one dealing with an established horror trope.

In the first, Blood Price, Vicky and Henry deal with a demon; in Blood Trail, werewolves; in Blood Lines, a mummy; and, in  Blood Pact, zombies. Just as she was dusting off her hands, ready to move on, Huff realized that she’d forgotten about ghosts, and so Blood Debt was born.

As with all great writers, the books are filled with moments that make you go “ah.” These are the moments that answer questions – some of which you didn’t even know you had. Like, could vampires get AIDS from the blood they drink? 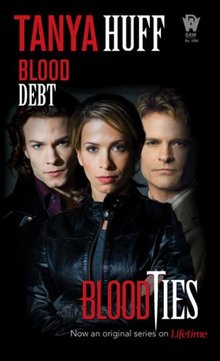 And if all this wasn’t enough, the books were made into a wonderful television series, called Blood Ties. It had the misfortune to come out from Lifetime at the same time that HBO was doing True Blood, and that will be the reason you likely haven’t heard of it. Much as I enjoy the books in the Sookie Stackhouse universe, for me, Blood Ties is the superior series. The TV version of Charlaine Harris’ novels became too much like soap opera.*

One of the side-effects of the TV series, however, is that all of the Blood Books were re-issued (they had always been in print) with new covers, featuring photos of the actors. The cast was well-chosen, and for my money, they look just the way they should.

Are these better than the original covers? I’ll have to think about that.

*My definition of soap opera: the difficulties and problems arise from the characters’ own willfulness and stupidity; they then stand around wailing instead of solving them.

Violette Malan is the author of the Dhulyn and Parno series of sword and sorcery adventures (now available in omnibus editions),  as well as the Mirror Lands series of primary world fantasies. As VM Escalada, she is writing the upcoming Halls of Law series. Visit her website:www.violettemalan.com.

I don’t think Tanya was the first. I believe P.N. Elrod just edged her out with the Vampire Files books, but not 100% certain of that.

That said, this was the series that turned me onto Tanya’s writing, which I haven’t regretted since.

I normally do not like books about vampires. One has to draw lines somewhere, and I do. That said, I discovered Tanya’s writing and loved it so much I read it all, even these, before meeting her a few years ago at Radcon. I enjoyed them immensely! Like all her stuff. I will read the new one. I watched the TV series even. I eagerly await more in the Valor series, but this will do.

@akomins: It’s almost impossible to determine who exactly came out with the concept of the vampire detective first. I think Tanya is definitely “one of the first.” Beyond that, I’ll leave it to the scholars to duke it out.

@GypsyPhyr: I think it was one of the Blood Books that I read first. Someone had passed it along to me as, if you’ll believe it, “too romancey”.

[…] I usually do. What Dying had to say about photo-realism struck me particularly when I was preparing my last post on Tanya Huff’s Blood Books. The covers that were the easiest for me to find as illustrations […]