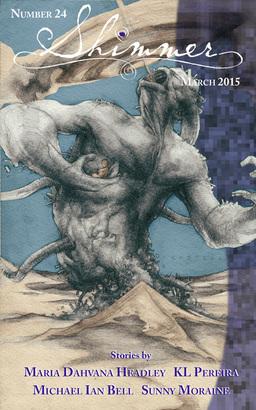 Shimmer is a slender little magazine with a big reputation.

The world is always ending. The world is always being reborn. Small steps, planetary scale. Turning itself inside out, do-over, rewind, fast-forward this part, and pause. Pause here and take a breath and read these four stories that will change your perception of how things end, how they start, how they go ever on.

Shimmer is not generally known for its humorous content, nor happy-go-lucky stories. Shimmer stories tend to have a mood and that mood is often bleak. Beth once told me Shimmer stories were like the line from Leonard Cohen’s “Hallelujah,” (or was that line only in the Jeff Buckley version?), it’s a cold and it’s a broken hallelujah. It’s cold and broken, but there is still a sliver of light by which to see. That’s the shimmer.

Fiction this issue is by Maria Dahvana Headley, K.L. Pereira, Michael Ian Bell and Sunny Moraine. A new story is released on the magazine’s website every other Tuesday; or you can buy the complete issue in a variety of formats. The digital version also includes some nonfiction content (interviews and an editorial). Here’s the fiction TOC for March.

A boy finds a baby in the garbage. It’s hotter this summer than it was the summer before. Everyone in the city is trying to get to the country, because in the city, the rat population is exploding. Rats themselves are exploding, though not of their own volition. Sometimes rats swallow explosives. Sometimes explosives are wrapped in little bobbles of food.

The first time you saw her, she was getting change from the machine in the lavandería; copper and nickel clacked against her metal palms, a rain of clicks pricking your eardrums. She was just as grotesque as your sister said: silvery fingers stiff as stone, jointless and smooth, unable to pluck the money from the open mouth of the change-maker. She struggled to scoop the coins into the stiff basket of her hands but you wouldn’t help her. You were too busy praying to Saint Lucy to take away your voice for good this time.

“You Can Do It Again,” by Michael Ian Bell

I come up again at the bodega on 189th and Amsterdam. When the vertigo and nausea pass, the shimmering forms resolve into bodies and storefronts. Trash bags are piled enormous in the street and I stare transfixed, one hand on the doorframe, steadying myself. In my other hand is a cola, cold like ice. I put it against my forehead and it shocks me into the moment. Every time is the same but it never gets so I expect it.

“Come My Love and I’ll Tell You a Tale,” by Sunny Moraine (coming April 14)

Tell me the story about the light and how it used to fall through the rain in rainbows. Tell me the story about those times when the rain would come and the world would turn sweet and green and thick with the smell of wet dirt and things gently rotting, when the birds would chuckle with pleasure to themselves at the thought of a wriggling feast fleeing the deeper floods.

Shimmer 24, the March 2015 issue, is now on sale. It is edited by E. Catherine Tobler and published by Beth Wodzinski. Digital editions are just $2.99 in a variety of formats, and 6-issue (one year) subscriptions are only $15. Read more details here, or order directly from the magazine’s subscription page.

We last covered Shimmer with Issue #23.