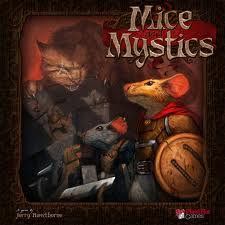 In a recent post, M. Harold Page gave some thoughts for gamer parents which I found very helpful. Particularly that instead of focusing on our old games, we should look to new games as perfectly acceptable entries into tabletop.

I spend a lot of time gaming with my kids, and it’s very easy for me to want to rush them. For example, at my wife’s urging, when my 9-year-old grew enamored with one of my NPCs, I decided to try to bring him into our adult Pathfinder RPG gaming group by letting him take over the character. He was constantly impatient, wanting to jump his turn in the cycle, asking questions constantly. Enthusiastic … but in a way that clearly drove the other players nuts.

However, instead of going full-on RPG, we can play games such as Mice & Mystics (Plaid Hat Games, Amazon) or the Pathfinder Adventure Card Game (Paizo, Amazon), games which have a lot of moving parts and tell a story, but are also more structurally well-defined than a traditional tabletop RPG.

It’s very easy for me to want to share with the kids the games that I most want to play, instead of taking a step back to find the ones that are more appropriate for them. I have to meet them halfway.

The same is true for books. My elder son is 9 and my youngest is 5, so there’s a fairly significant gulf in the books for the two of them, and for the longest time I was something of a dictator about how literature was doled out to them. For example, I tried for years to maintain a strict rule that they could not watch the Harry Potter films until after I read them the corresponding book. I don’t know if it is a reflection of my narrative performance style, but we’d get halfway through a book and one night they’d just lose interest and want to start on a different book. (This may have been, in part, the fact that neighbor kids would spoil how the movie and series ended.) It took me a long time to realize that forcing them to sit through a book they actually didn’t want to hear was not creating the sort of ardent readers that I was hoping for!

And don’t get me started on their complete apathy about listening to me read The Hobbit. 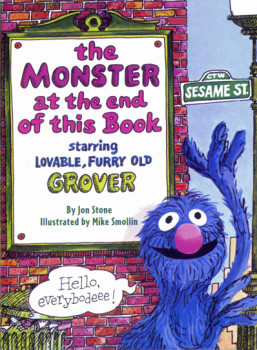 As those with young children know, they tend to get fixated on books. For example, easily the most read book in my house is the classic There’s a Monster at the End of This Book (Amazon). In fact, we are reading the Golden Books edition that I had when I was a child (although it just lost the back cover and needs some mending). I firmly believe that this book belongs in the canon of the greatest children’s literature, alongside Grimm’s Fairy Tales and Huckleberry Finn. I was amazed to discover a couple of years back that there is a sequel, Another Monster at the End of This Book (Amazon). While also fun, it definitely pales by comparison with the original. What’s nice about it, however, is that instead of having only Grover, it has both Grover and Elmo as characters. My youngest has long since memorized all of the Elmo lines, so he’s able to co-read the book with me. Pretty much every night, in fact.

For this reason, it’s important to get a lot of books in front of kids. They can be engaged by two things: repeated readings of a good book and constant variety. I, however, need the variety.

Fortunately, the rise of Amazon has correlated with a drastic rise in the availability of good quality, but cheap, children’s books. It can hard to find the dross in this pile of … not dross. And many of these books are available for free through Kindle Unlimited, making it a cost-effective way to get this variety, if you can’t get to the local library on a regular basis.

One series of interest to fantasy readers may be The Lost Dragons (Amazon) by Brian Rathbone. This collects together the first three volumes of his series about two dragons, normally working against each other, who get lost together and form a bit of an unusual friendship. There is no mighty adventure in these tales, just a simple story about how sometimes you have to work with people who you don’t necessarily like, and how trying to go it alone is more difficult. These are good, important lessons, and the artwork and narrative is charming and simple. 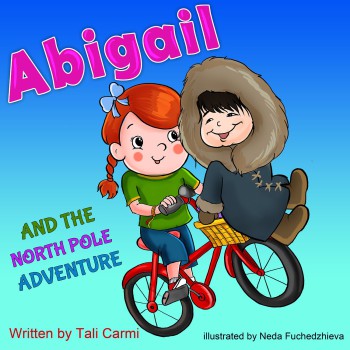 For children who grew up on Dora the Explorer, there is the Explore the Worlds series by Tali Carmi. The main character, Abigail, uses a magic bicycle to ride to exotic locations and learn about them. We got the third volume, Abigail and the North Pole Adventure (Amazon). While pleasant, I viewed it as a fairly simple tale about exploring the arctic.

Neither of these tales blew me away, but I wasn’t the one supposed to be impressed, was I? What about the real critics? What did the kids think?

In both of these books, I learned a valuable lesson: these simple book engrossed both of my kids. They asked for them again on subsequent nights … providing a pleasant respite from Another Monster at the End of This Book.

One of the most significant impacts of having children is how humbling it can be. The kids love me, but that doesn’t mean they’ll pretend that the things I think are cool are actually cool. And they certainly won’t avoid something they like just because I don’t get it. They’re kids; to a large degree, they can’t help but like what they like. Bonding with them means taking some steps in their direction, which means stepping out of my comfort zone, out of the realm where I want to live.

Sometimes, instead of playing Pathfinder, I need to play Pokemon or Chutes and Ladders. And sometimes, we need to read simple books about young kids (or dragons) where there are no swordfights or fireballs, no clone armies or spaceships.

I played the original Dungeon! board game lo, those many years ago. It was a very simplified version of the D&D RPG. VERY simplified.

But that made it a great entry game for kids.

Hasbro/Wizards of the Coast (somebody) reissued the game a few years ago. It’s still a simple D&D-ish board game.

But it’s still fun. My son (who was 5 when he first played it) and I play. And we use minis instead of the cards, which is always cooler.

But he changed the rules to make it cooperative, instead of competitive. Which is actually kind of cool because we’re monster-hunting together now.

Dungeon! is a good intro to RPG-style gaming.

You could also do much, much, much worse than Forbidden Island or Forbidden Desert. (If I had to choose one, I’d go with Desert.) They’re both cooperative, and in both games every character has a different role with a different special ability.