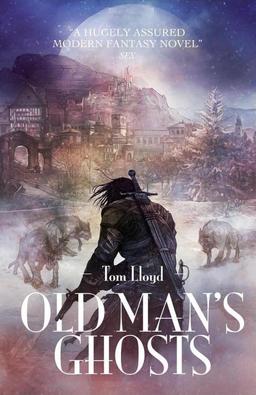 I’ve gotten to know a lot of writers — and aspiring writers — through my association with Black Gate over the years. Which means I’ve had the pleasure of reading many fine novels well before they’re released. Sometimes in draft, sometimes as an advance galley, and sometimes just as a favor to folks hoping for an advance review or a quick cover blurb. For a while in fact, it seemed I didn’t even pick up a novel unless I knew the author personally.

Recently I’ve been trying to change that. To go far afield, and seek out new talent from all corners of the world. I don’t know a single thing about author Tom Lloyd, for example, but I know I like the cover of his new book, and the description. What more do I need?

Some men can never outrun their ghosts. Enchei thought he’d found a home at last — a life of quiet obscurity far removed from the horror of his military days. After a decade in the Imperial City his mistakes have been few, but one has now returned to haunt him. As Narin’s pregnant lover comes to term, life has never been so perilous. There couldn’t be a worse time for a nightmare to be unleashed on the Imperial City, but luck’s rarely been on Narin’s side. Once, Enchei swore he’d take his own life rather than let his past catch up with him, but now it’s not just his own in the balance. Demons, rogue mages and vengeful noblemen haunt the city – and a man’s ghosts are always watching and waiting..

Glad to see you’ve ‘found’ Tom, John – this is book 2 in his latest series after MOON’S ARTIFICE https://www.goodreads.com/book/show/18664972-moon-s-artifice and his 5-book TWILIGHT REIGN series. I’ve read the first 3 of that series, have yet to pick this one up…but I will.

Thanks for the tip, Jason. I’ve gotten used to being behind on discovering fantasy series, but I’m not often five books behind…

I’ve added this to the “Series Fantasy” category.