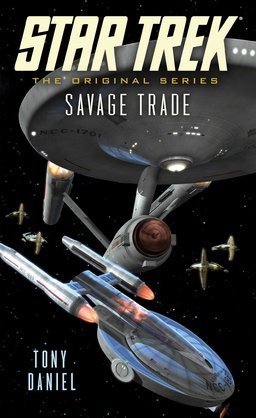 I’ve heard about many different ways that Star Trek fans have paid tribute to Leonard Nimoy over the last two weeks. For me, it was by watching Star Trek IV: The Voyage Home with my family. My kids have seen many of my favorite episodes over the years, but this was their first exposure to Nimoy as a director.

Of course, that just whet my appetite for more Star Trek. So while I’m waiting for the next episode of the excellent fan series Star Trek Continues, I thought I’d browse the latest licensed novels based on the original series. I was surprised and pleased to find Tony Daniel, author of Earthling, Metaplanetary, and the excellent The Robot’s Twilight Companion (which I reviewed for SF Site fifteen years ago), has penned a new novel, Savage Trade.

The U.S.S. Enterprise under the command of Captain James T. Kirk is en route to the extreme edge of the Alpha Quadrant, and to a region known as the Vara Nebula. Its mission: to investigate why science outpost Zeta Gibraltar is not answering all Federation hailing messages. When the Enterprise arrives, a scan shows no life forms in the science station. Kirk leads a landing party and quickly discovers the reason for the strange silence — signs of a violent firefight are everywhere. Zeta Gibraltar has been completely raided. Yet there are no bodies and the entire roster of station personnel is missing…

This is Daniel’s second Star Trek novel. The first, Devil’s Bargain (2013), is a sequel to my favorite episode, “Devil in the Dark,” and features the return of the bizarre and intelligent Horta. Savage Trade features the return of the mysterious rock creatures the Excalbians, from the season three episode “The Savage Curtain,” in which Kirk and Spock join Abraham Lincoln and the Vulcan Surak match wits against against four of the worst villains from history.

Star Trek: The Original Series: Savage Trade was published by Pocket Books on February 24, 2015. It is 384 pages, priced at $7.99 for both the paperback and digital edition. Read an interview with Tony Daniel about Savage Trade here, and an excerpt from the novel at Barnes & Noble.