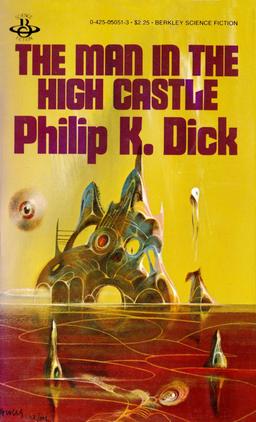 Richard Powers was one of the greatest paperback artists of all time. He revolutionized science fiction art in the early 1950s, and over the next four decades — during which he painted some 1,200 cover illustrations for SF and fantasy novels, including Arthur C. Clarke’s Against the Fall of Night (1954), Kurt Vonnegut, Jr. ‘s The Sirens of Titan (1959), and Philip K. Dick’s The Man in the High Castle (1974) — he was one of the most instantly recognizable artists on the shelves.

Over at The Daily Beast, author Mark Dery kicks off what he promises will be a series of articles celebrating book cover art and design with a detailed look at Richard Powers, sampling some of his most famous covers.

Haunted moonscapes. Alien cenotaphs whose shadows stretch from here to forever, tracing the geometry of dreams. Emissaries from the unconscious, their features running like melting wax. Cancerous cities a trillion light years from now, the undifferentiated growth of their lumpy, tumorous sprawl now silent, still as a fumigated wasp’s nest. Richard M. Powers’s science-fiction book-jacket landscapes are usually depopulated but not always: sometimes, a splinter of a man — an inch-high relative of one of Giacometti’s stick figures — stands alone in the emptiness, contemplating infinity…

Robert de Graff had launched the paperback revolution with his Pocket Books in 1939 and now publishers like Jason Epstein at Doubleday and Ian and Betty Ballantine at Ballantine Books were in the thick of it…. The Ballantines believed in science fiction as a literature of ideas, not gadget porn for ham-radio buffs, so when they opened their doors in 1952 they thought of Powers. His modernist sensibility, steeped in things seen at New York’s Museum of Modern Art, set him apart from the pulp-magazine style — astronauts rippling their pectorals at bug-eyed aliens while space babes cowered in fear — that had dominated the genre for decades. “One of the things that appealed to me about science fiction,” he says, in The Art of Richard Powers, “is that it was possible to do Surrealist paintings that had validity … in their own right, and not necessarily functioning as the cover of a book.”

I believe I first was exposed to this in Ursula Le Guin’s “Planet of Exile” and I do see his modern influence in everything from Chris Reccardi to that Justice League “Dark Heart” with an alien VonNeuman style invader device. Even considering some tributes myself for some works.

Taking a peek at his mind-boggling list over on the Internet Science Fiction Database, one thing I noticed is that he is credited multiple times throughout the ’50s and ’60s for covers of The Time Machine. I’m curious now: was this the same cover that got re-issued numerous times on different editions, or did he actually do more than one cover for the same book? If the latter, it would be interesting to compare his different interpretations of the same work.