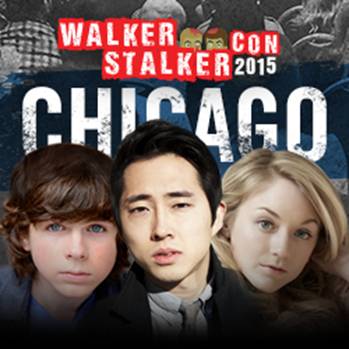 Zombies continue their relentless, feet-shuffling domination of all things pop culture – proof (we continue to hope) that sparkly, angsty, Seattle vampires with sappy theme songs are staked for good.

One of many indications that our infectious love of the undead shows no signs of a cure is the proliferation of Walker Stalker Con, a convention spawned by and primarily dedicated to, AMC’s hit TV show The Walking Dead.

What started in Atlanta, GA (near where the show films) as a small fan convention organized by fanboy pod-casters James Frazier and Eric Nordhoff, then spread to Chicago in 2014 and has now grown to a seven-city tour.

Walker Stalker Con is more than a standard fan convention. In the two Chicago events we have attended, Frazier and Nordhoff have managed to secure a sizable chunk of the cumulative cast of the show’s five seasons and space for “the talent” accounts for more than half of the convention floor.

In addition, the organizers strive to ensure all guests “come away feeling like they’ve had an amazing experience and became part of a greater community of zombie lovers!”

Is this great or what?

All Walker Stalker Con’s are three days of events, panels, and experiences that The Walking Dead fans and zombie fans in general would be hard pressed to find anywhere else.

Black Gate photog Chris Z and I gleefully waded into this year’s event in Chicago which was held in the convention space at Navy Pier.  I say “gleefully” not only for the obvious reasons, but because in a bizarre twist of irony the television show The Voice had booked additional space at the pier during the same weekend for their Chicago auditions.

Let’s just imagine that for a moment. 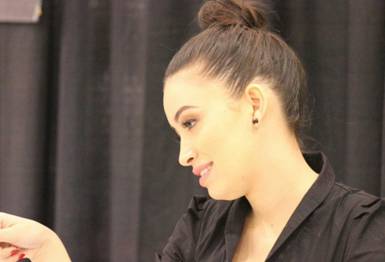 Thousands of people dressed in varying degrees of zombification vying for parking and comingling with almost as many fresh-scrubbed, aspiring pop stars from every local high school glee club within a 200 mile radius.

You can hardly blame us.  We simply didn’t know where to look first… 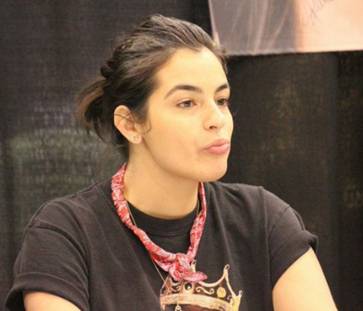 We had a chance to chat very briefly with Alanna Masterson (Tara), Brighton Sharbino (Lizzie) Christian Serratos (Rosita) and Kyla Kenedy (Mika) and in all cases our press badges were frankly a hindrance.  We were informed by the various handlers that none of the stars were “talking to press” as this was strictly a fan convention – something both Chris and I could appreciate but which limited us to questions like “Are you enjoying Chicago?” and “Is this your first time here?” and “How are you dealing with the cold?”

In other words, interesting to get up close but intensely lame as far as journalism goes.

Cooler by far were some of the vendors who set up on the other side of the hall which ranged from The Walking Dead merchandise of every imaginable ilk, to indoor zombie paint ball.

The Creepy n Cute Shop; Pals, Piper and Doreen started designing and making original, one-of-a-kind, hand-crafted creepy-n-cute zombie dolls back in 2013. To date they’ve not only created dolls depicting the entire cast of The Walking Dead, but also create commissioned designs representing all manner of creepiness.

Of course I was obligated by DNA to fall in love with the little goth chick doll that literally called to me from the display table.

Dolls start at $40 and no two are alike unless you request a reproduction of one of their “celebrity dolls” which are quite detailed and can go up to $100.

Donovan Scherer’s Fear and Sunshine;  A comic with a storyline geared toward the “tweeners” (start ‘em early is my motto) Donovan Scherer has created the world of Fear & Sunshine; the story of Sunshine Saliente, a little hippie girl who spends her days adventuring around Wandering Willows with her stuffed pal, Bunny. That is, until she learns of her lost destiny as the heiress to the greatest monster-making dynasty there ever was and has to learn the art of mad science.

The story begins with Fear & Sunshine: Prelude, a look into the past as Dominick and Delilah Darksmith welcome their daughter into the world. But their happiness is short lived when Fear, the greatest creation of Darksmith comes to claim what he believes is rightfully his.

Seven years later, Sunshine, raised by her foster parents, Salvo and Flora Saliente, learns of her dark past and the darker future that lays in wait. Alongside Death and her yellow-eyed aunt, Constance Adora, Fear & Sunshine, the second illustrated novel of the series, tells the story as Sunshine has to travel into an unknown world to bring back the business of Darksmith Manor.

The story is highly engaging with some multi-level humor for the adults, who will also thoroughly enjoy the illustrations.  It’s what your comic collection has been screaming for.

Equilibrium USG (Urban Survival Gear): As a globetrotting goth chick I am forever on a quest for the perfect carry-on bag, which until now I have yet to acquire.  Bags are either too big, too small, too heavy, too easy to snatch (though no one has dared so far) or just plain ugly.

Morris and his partner Phalkun researched and designed for nearly two years to complete a “modular” bag experience that accessorizes you with the equipment you need for any experience ranging from you daily commute to backpacking the world.

Morris explains the concept as, “Legos for Bags.”  Each piece of the bag (and I mean each piece) can be used by itself and interchangeably as a system. For instance, what appears to be an inside pocket, unsnaps, folds into thirds, and wah lah – it’s a wallet.

There are three base harness sizes and three sized bag in different styles with numerous amounts of pockets and compartments fitting laptops up to 17″.  In addition, there is an infinite selection of “Skyns”, which are also customizable up to and including the ability to submit your own design electronically using their online templates.

This is by far the coolest product I’ve seen in a long time and my customized Zombie Apocalypse Survival Kit bag is currently in production. 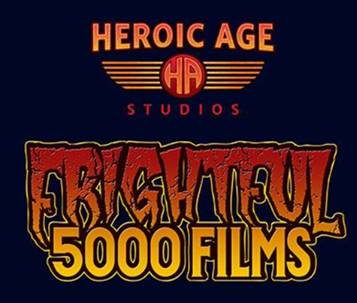 Since 1992 Heroic Age Studios, a Chicago-based production company has worked with companies like Marvel Entertainment, DC Comics and Dark Horse, further honing their skills with clients that include Warner Brothers and Disney.

And now they have branched out into a new way of making movies by creating Frightful 5000 Films where fans are involved in the actual creation of the final product.

And they are targeting the most passionate fans in the world – horror fans.

Heroic Studios is looking for 5000 hard-core horror junkies who will be involved in every aspect of production from choosing the film’s name, voting on actors based on their screen tests and the ultimate involvement, getting their names listed in the credits.

After production wraps, all 5000 participants will get an exclusive Frightful 5000 Edition DVD and a special invite to a horror festival built around the film’s premiere.

If you want to join the 5000 all you need to do is sign up to contribute $60 toward the cost of making the movie via their Kickstarter campaign which will launch shortly.

As for the movie itself, the screenplay is finished, and Heroic Age currently has several big names in the horror genre who have already expressed interest in working with them.

This whole idea was extremely interesting so trust me when I say I will be hitting up Production Manager Tim Lynn and Creative Director Eric Hector for an interview and a request to “ride along” on this project.

Until now, “crowd sourcing” has meant money – but what if it meant something much bigger than just funding.

Walker Stalker Con drags into Dallas on March 14 and 15, then onto Orlando at the end of June.  Check out their website for the rest of the 2015 lineup.

Sorry you couldn’t get more time with the cast members. 🙁

If you ever go to a convention where Norman Reedus is present, he will bring the entire convention to a screeching halt, as the population of the nearest three states will converge upon the site, violating the occupancy limit beyond imagination. But if you get the chance to go to such a con, it’s well worth it to join the masses and drive the fire marshals insane. He’s that cool.

MW,
Thanks for the head’s up. We’re covering a show Saturday where Norm will be present.

[…] year the 2015 circuit kicked off with Walker Stalker Con which was then followed by the Wizard World Fan Fest (coverage coming next week). From that point […]