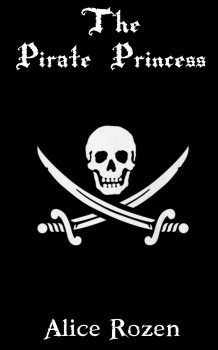 This month’s self-published novel is The Pirate Princess by Alice Rozen. This is a children’s book, and a sequel to a previous book called Jinx, after the main character in both novels. Jinx MacAbre is a ten-year-old witch and the daughter of the demon Lilith. She sees herself as a sort of superhero, dishing out punishments to school bullies, though she seems to lack much in the way of self-awareness. It’s not really clear whether her curses — swelling someone’s tongue so that he can’t speak, or turning someone green — are permanent, but if so, they are disproportionate to the actual crimes of the bullies, who after all are kids who generally grow out of that phase. But a sense of proportion may be a bit much to expect of a ten-year-old, and disproportionate punishments are a standard trope of fairy stories, a genre into which this story fits quite comfortably (though at last count, there was only one actual fairy in the story).

Jinx’s real problem aren’t her schoolyard adventures, though. It’s that not only is she a witch, she was born on Halloween, and as such is a very important ingredient in a rite called for by Davy Jones, the demon who rules the dead of the sea. And Sirena Avery, the titular pirate princess who looks about the same age as Jinx but in reality is a 300 year-old undead sea captain, is on a mission to deliver Jinx to Davy Jones to repay the debt to Jones that gave her The Flying Dutchman and a crew of the most famous pirates swallowed by the sea, including Samuel Bellamy, Edward Teach (“Blackbeard”), and more. They’ve come to claim Jinx and send her to Davy Jones’s Locker. The appearance of Jinx’s identical twin, Felix, complicates matters, and soon Jinx has to rescue her friends and her twin from Davy Jones himself.

It is a fun story, and genuinely funny. I liked and cared for Jinx, and enjoyed her perspective on things. She was always ready with a joke or a smart-aleck comment, though this made her seem older than she was supposed to be, more worldly wise and clever, but that is not uncommon for child protagonists. Felix, Sirena, and Ruadan (Jinx’s fairy prince frenemy) were equally intriguing. While lacking in magic, Sirena is clever and ruthless, and despite all Jinx’s power, proves a tough enemy, even with Felix’s help. Felix is maybe a bit too much like Jinx — a bit more contrast between the twins could have led to more entertaining conflicts (not that they’re without conflict, but those seem to come from the fact that they’re too much alike). Ruadan makes a more interesting source of conflict; he may have Jinx’s best interests at heart, but he argues with her quite a bit. (I’d expect a romance subplot here if not for the fact that Jinx is openly lesbian.)

Where I think the story stumbled the most was in its portrayal of the pirates. It’s odd that a crew of the best pirates in history all come from a narrow slice of time, even if we do call it the Golden Age of Piracy. Even overlooking that, they didn’t feel like 300 year old pirates, with the perspectives and beliefs to match. Sirena herself sounded more like a 21st century college sophomore than a 17th century undead pirate, and I found it hard to believe that the ultimate goal of all those undead pirates was a socialist utopia. (Honestly, I’d expect them to be a little more… libertarian.) It is, admittedly, hard to truly comprehend the beliefs and goals of past generations, much less make them relatable to modern audiences, but arguably it’s a form of cultural imperialism to impose 21st century values on people who did not share them. That said, I can cut some slack to an undead pirate crew led by a transgendered pirate princess.

The Pirate Princess is available from Amazon.