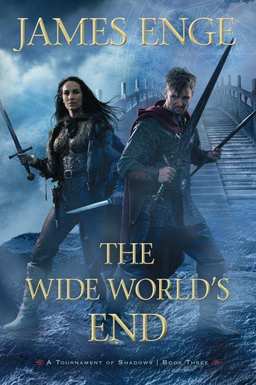 You have something wonderful to look forward to in February, and it’s sort of the opposite of Valentine’s Day.  The third volume of James Enge’s Tournament of Shadows trilogy, The Wide World’s End, is coming out, and it’s every bit as strange and glorious as Enge’s novels have all been so far, with an extra dimension of heartbreak.

The author and publisher have been completely forthright about that. The cover copy tells us even the happiest available ending on the cosmic scale will be a disaster on the personal scale.

Morlock and Aloe think their parting is temporary, but it is final. They may or may not save the world, but they will not save each other, or themselves.

And as a reader, I’m so grateful for that disclosure. In all the moments when one asks, “How will our heroes get out of this one?” or “How are the lovers going to make it back together this time?” it’s helpful to know one is in a book where the answer might at any moment be, “They won’t.”

Of course, as a longtime reader of Enge’s novels and stories of Morlock the Maker, most of which are set some two centuries after The Wide World’s End, I already know Morlock and his wife will endure, scarred inside and out, to continue their heroic lives apart. How tempting it would be, though, to imagine that Morlock’s lovely, doomed marriage to Aloe could survive the present volume. Can’t they ride into the sunset just one more time? Goodness knows they suffer enough to earn it.

One of Enge’s great accomplishments here is that this origin story for an established character, with all its gratifying backstory leading up to something familiar, is full of surprises. Morlock’s banishment from the Wardlands, his defeat of the Sunkillers who are trying to destroy all life on Laent, his collapse into addiction — these are all things I thought I knew, because I’d seen into his future after them, but the events as they unfold are darker, stranger, and more complex than I’d imagined. Aloe spends much of the novel investigating a murder, and I was sure early on that I understood the means, motive, opportunity, and culprit, yet the resolution of that plot is nothing short of shocking.

As the Tournament of Shadows trilogy has unfolded, I have asked myself many times how the books would play for a reader who had never read Enge before. Now that this trilogy has come to its close, I think they’d make a fine introduction to Morlock and his world of Laent. For every thing in these books of Morlock’s youth that’s illuminated by what happens two centuries later, there’s some other thing from the books of his maturity that I understand in an entirely new way. I want to go right back to Blood of Ambrose and work my way through the whole series, or perhaps through all six books again, as if it were a narrative Moebius strip, until the next Enge novel comes out, and the next.

Come on this journey through your old stomping grounds in Ontil and Narkunden, north beyond the werewolf city of Wuruyaaria, across a perilous wasteland that feels alien even to the unflappable peoples of Laent. Marvel at Morlock’s young sister Ambrosia as she forges an empire from a village inhabited by hundreds of princes, every one of them from toddlers to gaffers named Prince Uthar. You’ll find half-dragon saints, rickety flying machines, and a duel like no other you’ve ever read. This time, the road to tragedy travels through wonder.

I read Enge’s Blood of Ambrose about a year or so ago and absolutely loved it. I bought more of his books but just haven’t caught up to reading any of them yet.

Thanks for reviewing this though. Makes me want to pull out The Crooked Way and catch up to this one!

I read the original trilogy and thought it was great; decided to wait on the new trilogy until it was complete. Soon my patience will be rewarded …