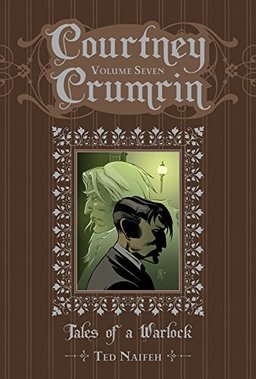 Nearly three years ago, I reviewed the first volume of the new hardcover editions of Courtney Crumrin, concluding that “Courtney Crumrin is one of the finest comics produced in the 21st Century.”

Be honest. If you had magical powers when you were a teenager, what would you have done? How long would you have walked the path of righteousness before cursing the school bullies? Before casting a spell to make yourself popular? Before just flat-out killing bad people? Would you have made friends with elves… or goblins?

Ted Naifeh’s series of fantasy comics… introduces us to Courtney Crumrin on the day her vapid parents move in with her grand-uncle, Aloysius… Going through his collection of grimoires, she begins her own self-guided education in the magical arts. In the first volume, she traps a child-eating goblin, enchants herself to become the most popular girl in school, travels to the faerie kingdom to swap out a changeling for a human infant, and gets replaced by a doppelganger who turns out to be nicer than her.

Like Michael, I was thrilled to find the early black & white issues of Courtney Crumrin gradually being collected in handsome and affordable hardcover editions — and in color! I was purchasing them steadily, until I kinda lost track of them. (Cut me some slack… I collect a lot of stuff.) Shortly after Christmas, when I noticed that it was now 2015, I did a quick check to see how many volumes were out. I was startled to see that no less than six had already been released, and a seventh, Tales of a Warlock, was on its way. 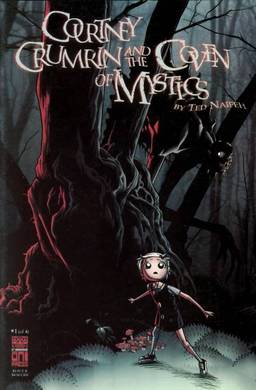 I had no idea that I’d missed enough issues of the comic to fill that many volumes. Clearly I had some catching up to do, if I wanted to be ready by the time Tales of a Warlock arrived in March.

At long last, Courtney Crumrin Tales returns… in full color! Though the Witches and Warlocks of Hillsborough keep to themselves under Ravenna’s Law, there are outliers who are a danger to others. The Anti-Sorcery Society, headed by mortal Horace Crisp, seeks to destroy these individuals, and Aloysius Crumrin, an eager young man, offers his assistance – keeping his magical ancestry to himself, of course. But he doesn’t count on Alice Crisp, Horace’s tenacious daughter, accompanying him on missions, or on trusting her with his secret… or on falling in love. Which proves more dangerous than anything when Horace becomes his enemy.

I bought the first in the series and plan to go through them. The writer has excellent storyboarding. This was a good recommendation.

Glad you liked it, Ape! Let us know what you think when you’ve read a few… I think you’ll really enjoy them.