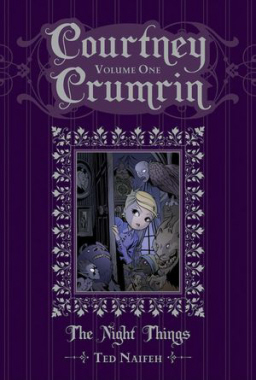 Far back in the mists of time (March 2002, if you want to be picky), I picked up an intriguing black and white independent title at my local comic shop. It was Courtney Crumrin and the Night Things #1, written and drawn by Ted Naifeh and published by Oni Press.

The first few pages featured cold and uncaring parents, a spooky house, young bullies, sinister night creatures, and a protagonist who was clearly an aspiring criminal and juvenile delinquent. Before the end of the first issue, young Courtney Crumrin had trapped a goblin and forced it to cruelly devour one of her school mates, bones and all.

Man, this was just what I was looking for. I brought it home and read it to my three children, and they immediately clamored for more.

More is what they got. Over the next few years Naifeh produced over a dozen issues following Courtney and her Uncle Aloysius, a powerful warlock who reluctantly teaches her magic. Courtney’s adventures involved the helpful (but hungry) goblins Butterworm and Butterbug; Boo & Quick, talking neighborhood cats who assist the young aspiring witch; a local Coven of witches and warlocks who frequently turn to Aloysius for help with dread problems; night things from the Twilight Kingdom — including The Dreadful Dutchess, Courtney’s friend Skarrow, and The Twilight King — and the terrible Tommy Rawhead, a giant hobgoblin feared by the Coven, and everyone else.

The various issues of Courtney Crumrin were collected into four handsome trade paperbacks, followed by the short-lived spin-off series Courtney Crumrin Tales in 2005. But that was all, and fans were left waiting while Naifeh turned to other projects, like Polly and the Pirates.

Courtney Crumrin is one of the finest comics produced in the 21st Century. Don’t miss the opportunity to have these early issues in a handsome permanent edition. Courtney Crumrin Volume One: The Night Things is 144 pages in hardcover; it is published by Oni Press for $19.99.

More than a decade after I read them the first issue at bed time, all three of my children are still ardent Courtney Crumrin fans. But they’ll have to wait for this volume, because Dad wants to read it first.

You have to stop talking about things that make me spend money.

(Speaking of which, I look forward to getting more Black Gate on my Kindle . . .)

How do you think I feel? By the time I tell you about them, I’ve already paid for most of them.

(And we’re still hard at work converting BG 14 to the Kindle. Stay tuned!)

Between this, more Black Gate on the Kindle, jackvance.com and all of the authors mentioned on the SFSignal sword & sorcery megapanel discussions, it’s going to be expensive. But glorious!

[…] of magic and of the harsh truths about life.  I’m glad that, after years out of print, the original volumes are being reprinted, even as a new series of adventures […]

[…] three years ago, I reviewed the first volume of the new hardcover editions of Courtney Crumrin, concluding that “Courtney […]