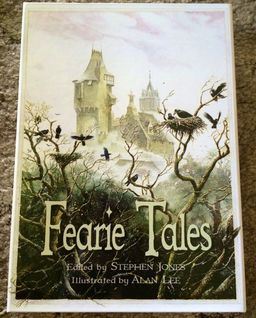 One thing I miss about the lack of a print edition of Black Gate is that I no longer shop for cover art.

I still do, sort of, by keeping an eye on the best pieces of art every year. And as we close out 2014, I think I can say that my favorite cover this year was for the deluxe limited edition of PS Publishing’s Fearie Tales, painted by Alan Lee (click on the image at left for a bigger version.) What can I say? I’m a sucker for castles and crows.

Cover artist Alan Lee was, along with John Howe, the lead concept artist for Peter Jackson’s The Lord of the Rings films. He has illustrated dozens of fantasy novels, including the covers of the 1983 Penguin edition of Mervyn Peake’s Gormenghast trilogy, and several works by J.R.R. Tolkien, including the centenary edition of The Lord of the Rings (1995), a 1999 edition of The Hobbit, and The Children of Húrin (2007).