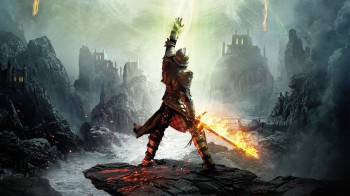 If you or anyone you know are into video gaming at all, you’ve been hearing a lot about Dragon Age: Inquisition lately (Official Bioware trailer here). Bioware’s latest installment in the Dragon Age series was released November 18th, and some of us have vanished down the rabbit hole after it. Well, more than a few of us: it premiered to strong sales and consistently solid reviews across the board. And having played it, it’s not hard to see why.

A little background first. When I was ten, my brother got a Nintendo. Dating myself, aren’t I? The original grey brick. My brother loved that thing. And I loved watching him play. But when I sat down to play Super Mario Bros., I couldn’t get past the first few levels. I tried for a while, then gave up in absolute frustration. I was convinced I was terrible at video games.

Then Final Fantasy VII came out. By then, I was in college and lived with three other friends. My then-fiance brought home a Playstation and we all took turns playing obsessively. I discovered that I COULD play. In fact, I was pretty good at it. I just had to find the right kind of game.

Flash forward another :cough: years, and Dragon Age: Origins. My eldest daughter was a newborn nurseling, and I played through four times. So it was with great excitement (and many warnings to my husband about his upcoming increase in child-related duties) that I anticipated November 18th, 2014.

And I have not been disappointed.

The basics of the story aren’t the most innovative: there’s a terrible evil breaking through into your world and you are the only one who can stop it. Gather allies, kill baddies, help the innocent.

To be more specific: Thedas is beset by a number of problems. Tensions between nations threaten to erupt into outright war. An ongoing international civil war between mages and the templars who are assigned to police the behavior of magic users is tearing the countryside apart. And when a hope of peace appears, the summit is hit by the magical and interdimensional equivalent of a nuclear bomb, killing off the leadership of several factions and creating The Rift, a hole between Thedas and The Fade. The Fade is the world of spirits and demons, and what is coming through isn’t the friendly kind.

You play The Herald, an individual who has somehow developed the ability to close the rifts in between worlds. You have been drafted as the figurehead in The Inquisition, a movement that hopes to bring peace, close the rift, save the world, and set things to right. If you can live that long.

The mechanics of the game… work. I love gaming but have little time for it, and won’t presume to speak much on that point except to say that they were easy for me to get up to speed on quickly and intuitive enough to not interfere with my enjoying the game. The new battlefield mode allows you to be as hands-on as you like (or not). There is a “War Room” mode that allows you to delegate tasks further afield to a team of advisers. It’s not only fun; it allows you to get a stronger sense of that set of characters as they pitch different approaches to the problems of running a large organization. It also expands your sense of the world of Thedas.

What really works and what has made the Dragon Age saga so popular is the storytelling. More specifically, Inquisition’s strength is that the focus of its storytelling and of its long-term gameplay is its relationships.

No, not THOSE relationships. Although yes, you can romance other characters. Yes, Inquisition earns its “M” rating. The addition of gay and lesbian potential romance partners has garnered the game a great deal of press (although the in-game portrayals are considerably more subtle and better handled than the promotion thereof). And yes, as a player I think those aspects of the game are fun. They’re generally tasteful, often downright funny (one scene involves two other party members walking in very soon after the fact, to everyone’s mutual embarrassment) and flow naturally from the game play.

But the relationships I am talking about exist on several levels. Through banter, conversations in camp with your other party members and NPCs, and the back stories that unfold through the course of the game, you come to really know the other characters in the game.

You talk about fashion, food, families, histories. You have allies of other races, species, and socioeconomic classes. Your choices as a player impact your future conversations with those characters, as does your attitude towards them in conversation. You can lose members of your party based on those choices, and the way you interact with your part y members can change the course of the game.

And to take it one step further, those characters have relationships with each other. Throw in the fact that Inquisition has more than 200 hours of available game time and it can be hard to remember that Cassandra Penterghast is entirely composed of pixels and binary. You don’t just play. You become friends with this game. The immersion is impressive and, I gotta say, a hell of a lot of fun.

I’m only fifteen hours in myself. I imagine I’ll have a lot more to say in another thirty or forty. Is anyone else playing along? I haven’t even touched the multiplayer options yet.

I’m about 40 hours in, and feel like I just got through the opening chapter — if I don’t go well over 100 hours, it won’t be through lack of trying. It’s a bit glitchy at times (I’m playing on PC) but I’m loving almost every minute of it.

I’m ninety hours in, and I can certainly believe I’m not even halfway through. The game really opens up once you reach Skyhold–but it’s a little bit deceptive, since you might initially expect that’s the end of the game, rather than the beginning, as it’s where you accomplish the goal you’ve had since the start of the game only to find that the real fight has just begun.

Yep, that [getting to Skyhold] is what I just did yesterday.

I’ve been dossing this one over for a while, aware that I like the relationships thing, but also aware that stiff stagnant combat was what put me off dragon age origins( its petty, I know). Have they made many improvements to the combat, do you think? I heard its a lot faster then origins and a little more focused on actiin then tactics, but Id like to know what you lot think

Donald: I sided with the mages this time, and realized i have done so the whole saga. Next runthrough I’ll try something different I suppose! From what I understand gameplay doesn’t change dramatically, but some details are altered. I don’t think you can play with Dorian if you choose the Templars, which in my view would be a tragic loss. Still, I suppose I’ll soldier through with only Varric and Bull to crack wise.

Connor: with the above disclaimer about my skill at assessing combat systems:

Yes. Definitely. It’s considerably smoother and more intuitive. It doesn’t bug up like Origins did, and it doesn’t basically function as an autopilot. (With a lot of settings and classes in Origins you could pretty much hit kill, sit back, and watch. Which was fine with me but not for everyone.) The battlefield view lets you freeze action and assess targets and tactics, advance second by second, and do the more fine tuned tactical approach. But that isn’t mandatory, and isn’t even needed for most fights on the regular modes.

I went with mages also; but I think you can get Dorian, just not until later in the game. Myself, having sided with the mages, I only just got Cole — I haven’t even actually talked to him yet.

The gameplay I’ve watched hasn’t excited me, but this is probably as close to a co-op Skyrim as we can get, so get it we will.

The real question is whether or not my wife will be able to not play while I’m working.