On Friday night, as the light waned and the sky turned the color of mildewed pumpkins, that familiar holy chant began resounding up and down the streets: “Trick or Treat!”

Wee supplicants bedecked in strange garb began their door-to-door pilgrimages to receive the benediction of sugared confections by the handfuls.

Hallowe’en partly descends from All Hallows’ Eve (on its good Catholic mother side — the one who married some pagan dude and their offspring got really weird and started bobbing for apples and wearing William Shatner masks). All Hallows’ Eve was once a prologue to All Saints’ Day. Not many recall that that one nowadays. By dint of Hallowe’en falling on Friday this year, many bars, restaurants, and homes expanded their Hallowe’en celebrations to encompass Saturday, creating the irony of All Hallows’ Eve not only overshadowing, but completely usurping the day of the saints.

The time of feasts and holy days is nigh upon us. Now our most cherished holidays both secular and religious come in quick succession: after Hallowe’en, Thanksgiving and Christmas before the lull of the long, gray winter.

After a couple dull months, a certain bow-wielding matchmaker sneaks in to liven things up a little. He is soon followed by those green-bedecked, Guinness-swigging leprechauns who are ambassadors of a saint who drove snakes out of a place that never had any snakes.

Valentine and Patrick won’t miss losing All Saints’ Day since they each have their own, but they — one a third-century Roman martyr and the other a fifth-century Romano-British missionary — might well wonder how they became the de facto saints of heart-shaped candy and risqué greeting cards on the one hand and green beer on the other. Along with a certain fourth-century Greek bishop named Nikolaos, they could form a support group for saints whose legends bear little resemblance to their actual lives, while also making their names among the most well-known on the planet.

Not that it matters to most of us. The holy days and the names attached to them were always more-or-less excuses to do what humans have been doing (or wanting to do and feeling really guilty about it) throughout history: looking for reasons to get together and celebrate and dress in silly clothes. If there is a benevolent God, that Prime Mover may well wonder why we feel such a strong need to have an excuse.

Some people get creative for the holidays, Hallowe’en being no exception. My wife and I are in that “some people” category, and we definitely had the best-bedecked haunted house in our town this time around — just note that we had about 40 trick-or-treaters, while our neighbors directly across the street only got three. Trick-or-treating did seem to be down — while I trotted along behind my kids through the neighborhood, I spied very few doing likewise. Some people were driving the kids around in minivans, possibly because it was below freezing. 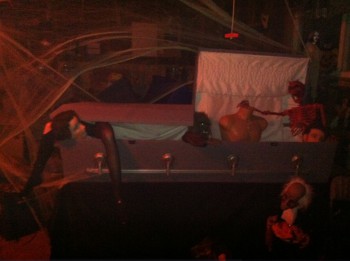 But a lot of families just seemed to have caved and gone to one of these Hallowe’en parties put on by local churches and community organizations. Despite all that, a lot of kids apparently noted that our house was a “must visit” — although some of them could not bring themselves to venture all the way to the door, and we had to oblige the tykes by bringing the candy cauldron down to where they stood quivering in their Ninja Turtle and Princess Sofia costumes. This year, we added a real coffin to our garage display (see pic at left).

I have to give special props to the cleverest build-up I witnessed this year. There is a house that I pass frequently on my way to work in the nearby city. Each year, they go all out for Hallowe’en, planting signs along their walk that say “BEWARE” and “THE END IS NEAR” and “TURN BACK NOW!” They put up great props, but this year they took it to a new level. They had about half-a-dozen of these full-sized children mannequins that were a weird mottled blue color (whether store-bought or ones they made themselves I don’t know, but I’ve never seen them). They’re somewhat creepy looking, their arms reaching out to take you in a cold embrace and pull you into their blue world…

But in the weeks leading up to Hallowe’en, I began to notice that they were in different places. Then they began turning up in neighbors’ yards. A couple days prior to Hallowe’en, a few of them had migrated to a lawn all the way down the block.

Obviously, the people had made arrangements with their neighbors to make it appear like these things were actually wandering up and down the street at night, perhaps getting frozen in place with the first rays of dawn, only to start sneaking around again when the cold stars came out. To them, I give my thanks for that special anticipation I had for a couple weeks of October, driving to work wondering where the blue children had wandered off to now.

After a couple commenters on last week’s post recommended the movie Sinister (2012), my wife and I decided to make that our Hallowe’en viewing after our little vampire girl and even littler cop zombie were both tucked in their beds sleeping off the sugar daze. My wife fell asleep about twenty minutes in, but that was less a comment on the film than on the day that preceded it. I also met a milestone this past weekend by finishing William Hope Hodgson’s challenging masterpiece The Night Land (well, okay, I read the modernized version by James Stoddard). You can expect reviews of both right here in the coming weeks.

Thanks for the update! Some thoughts on a couple of your comments:

“Not that it matters to most of us. The holy days and the names attached to them were always more-or-less excuses to do what humans have been doing (or wanting to do and feeling really guilty about it) throughout history”

I think your secular assessment of how most of us view holidays now is correct. But I think that’s a pretty anachronistic assessment to stick on people’s view holy days throughout history. In fact, I think the opposite is more than likely true. Most holy days–at least in the Western tradition–seemed to initially and primarily be geared toward religious concerns. Fun and feasting seemed to be incidental or later additions to these ancient holy days.

Also your comments on the fewer number of trick-or-treaters and families “caving in” to harvest festivals or Halloween carnivals–I think people (and I’m not a parent so I’m speaking theoretically here) are more fearful of taking their children to get candy from strangers. Are the risks worth it? I think many parents think the answer is plainly “no.”

Look forward to your thoughts on Sinister. Who knows? Maybe you hated it.

Thanks for the comments. I have a couple thoughts in response to your observations:

“Most holy days–at least in the Western tradition–seemed to initially and primarily be geared toward religious concerns. Fun and feasting seemed to be incidental or later additions to these ancient holy days.”

Partly what I was thinking about when I wrote the sentence to which you’re responding was how the Catholic Church would take the existing celebrations of their pagan converts and apply religious meaning to them. It was a clever gambit because they knew, for instance, that some people would never be persuaded to give up their observances of the winter solstice, but that those could be redirected to celebrating the birth of Christ. Many of these holidays have ancient roots with a Christian overlay.

I will not deny that, for many people, holidays like Christmas and Easter still have strong religious significance, but as our society grows more secular they are embraced and celebrated even by folks who don’t go to church. Those seasonal, cyclical feasts and rituals continue unabated even as the religious veneer fades. Granted, the modern traditions and ways in which we celebrate now may reflect only the barest echoes of either the religious or pagan roots, but still they are echoes that can be traced, reverberating back through human history.

I think you are 100% correct that many parents fear the risks of trick-or-treating. I also think those parents are incorrect, i.e., their fears are almost entirely founded on urban legends. That’s all that the stories about razor blades and poison in the candy ever were. This particular hysteria impacted my own trick-or-treating days back in the ’80s (my mother insisted on inspecting every single piece of candy my sister and I got before we could eat them). Fortunately, although my mother bought the stories hook-line-and-razor, they did not dissuade her from taking us out trick-or-treating, and so I am fortunate to have those memories.

Don’t get me wrong: I’ve got nothing against the community Hallowe’en parties — I dig the harvest festivals and Hallowe’en carnivals — but I see them as just one part of the tradition. Think of “It’s the Great Pumpkin, Charlie Brown”: the gang goes trick-or-treating, then they go to the community-center Hallowe’en party (except for Linus, who sits in a pumpkin patch all night).

Sinister? Bring on the review!