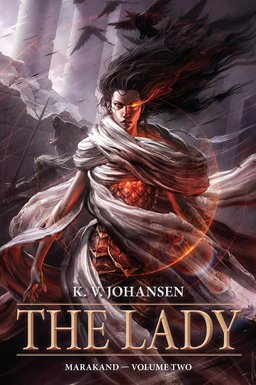 The first novel in K. V. Johansen’s two book Marakand series, The Leopard, appeared in June from Pyr Books and was widely praised. Even the esteemed James Enge was impressed, saying, “I’m hooked. The mix of magic, Tibetan-style religion, and Harold Lamb-style adventure is pretty addicting.”

I’m pleased to see that Pyr isn’t keeping us waiting for the final volume — it will be released in December, barely six months after the first appeared. If you can’t wait, you can always sample her first fantasy novel for Pyr, Blackdog.

Possessed by a ghost who feeds on death, the undying assassin Ahjvar the Leopard has been captured by the Lady of Marakand, enslaved by necromancy to be captain of her Red Masks. His shield-bearer Ghu, a former slave with an uncanny ability to free the captive dead, follows Ahjvar into the war-torn lands of the Duina Catairna to release him, even if that means destroying what is left of Ahj’s tormented soul.

Deyandara, the last surviving heir of the Catairnan queen, rides into a land ravaged by disease and war, seeking the allies she abandoned months before, though they have no hope of standing against the army led by the invulnerable Red Masks of Marakand and the divine terror of the Lady.

In the city of Marakand, former enemies ally and old friends seek one another’s deaths as loyalists of the entombed gods Gurhan and Ilbialla raise a revolt, spearheaded by the Grasslander wizard Ivah, the shapeshifting Blackdog, and the bear-demon Mikki. The Lady’s defenses are not easily breached, though, and the one enemy who might withstand her, the Northron wanderer Moth, bearer of the sword Lakkariss, has vanished.

K. V. Johansen’s is certainly one of the finest ‘Fantasy Writer’ of our times..he weaves planning, plotting and intrigues in a very subtle way. The leopard was never an easy novel.. it was tough and unconventional in structure. Hoping the same with this one too.Thanks for sharing information!