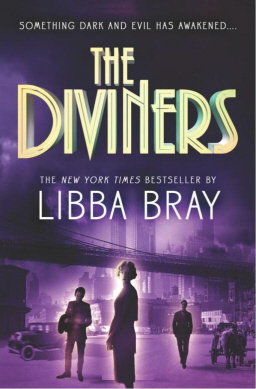 What does YA urban fantasy need to breathe fresh life into its tropes? Prohibition! Not your first guess, either, was it? Yet it works beautifully.

Libba Bray set The Diviners and the series it opens in 1926, in a New York where all the superstitions have just become true, and all the forms of charlatanry have just started working. Most people don’t know it yet and the ones who find that they have powers they never believed in are still isolated and afraid.

The novel opens with two party tricks gone wrong. In Manhattan, a debutante desperate to liven up her birthday bash breaks out a Ouija board and releases something nasty. In Ohio, a girl with a world-class attitude shows off her talent for psychometry and the touch of the town golden boy’s class ring reveals his secrets to her.

She flaunts what she knows. The boy’s family is rich and powerful. Pretty soon, Evie O’Neill’s parents have to send her out of town to the farthest available relative on the soonest available train. A train to New York City, perhaps the only place on Earth big enough for Evie’s personality.

These two unquiet spirits, one living and one dead, circle around one another, both growing in power and community, through six hundred pages of suspense punctuated with bursts of laughter.

One of the things that impressed me most about The Diviners is that it’s a book about the Roaring Twenties written for a generation of readers who have, for the most part, never seen a black-and-white movie.

For a reader of my vintage — I’m old enough to be a veteran teacher of teenagers — Libba Bray spends the first few chapters laying the setting on a bit thick. Just as I began to think the narrator was spending too much attention on the pop culture of the time, I remembered that my students would all have needed that background. Once I started reading through my students’ eyes, the balance of story development and setting development looked much more organic. The Roaring Twenties require worldbuilding, and a couple of chapters in, the ongoing effort to reveal the story’s world works almost invisibly. 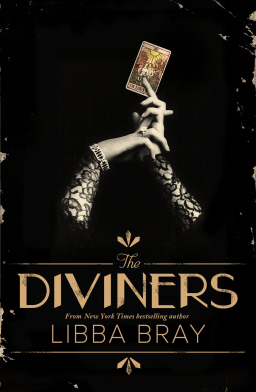 The ensemble cast has a feel reminiscent of Buffy the Vampire Slayer, except that not all of the Scoobies have assembled yet by the first novel’s end. Their dynamic is significantly different, in that more members of the gathering team have extraordinary abilities from the start than Buffy’s circle did. Also, a cluster of characters from Harlem that can’t quite merge with the cluster of characters based in Central Park East brings welcome diversity to the book. I liked those variations, especially because Evie starts out more full of herself than Buffy ever was, so she needs all the chances the book gives her to find and use her capacity for humility. She has help. The uncle she’s been packed off to is a mentor figure, the curator of a museum of the occult who has made some bad choices and now struggles to do the right thing, by Evie and by the world.

Origin stories abound. The main plot arc is a neat intertwining of a coming of age story with a mystery that must be solved and a cataclysm that must be prevented. Oh, and there’s the beginning of a love triangle. If you’re truly allergic to any of those structures…actually, give the book a chance anyway. I would have said I’d seen enough of all those things, but Bray makes it all new.

Even the villain. He’s a serial killer who wants to end the world. Sounds unpromising, and in lesser hands, he might have been. Bray comes up with some fascinating mechanisms of magic that allow theurgy to work in a chaotically pluralistic melting pot of a city. Ordinarily magic systems are not my thing, any more than serial killers with devil complexes are, but this magic system has enough dream logic to it that I found it viscerally satisfying. Evie needs to learn more from her Uncle Will than just the use of her own divinatory skill to survive her brushes with the supremely disturbing Naughty John.

It’s no spoiler to say that our heroes prevent the end of the world, since this is the first book in a series. The ending does feel like an ending, even as several aspects of the story open up to suggest a weirder world even than the one we’ve been in. Evie has proved herself brave enough to undertake any challenge, and she’s on her way to becoming her best whole self, but she has a long way to go and plenty of delicious mistakes to make.