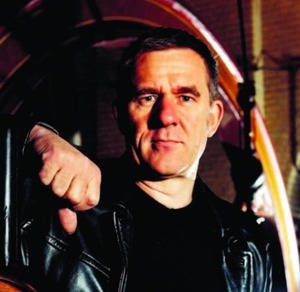 Graham Joyce, the World Fantasy Award winning writer of The Facts of Life, The Tooth Fairy, and Some Kind of Fairy Tale, died yesterday of lymphoma. His first novel, Dreamside, was published in 1991. He followed it a year later with Dark Sister, the first of his many fantasy novels to be nominated for (and win) the British Fantasy Award. All told, he won the British Fantasy Award for best novel a total of six times, for Requiem (1995), The Tooth Fairy (1996), The Stormwatcher (1998), How To Make Friends With Demons (2009), and Some Kind of Fairy Tale (2012). His 2002 novel The Facts of Life won the World Fantasy Award; his final novel, The Ghost in the Electric Blue Suit (published in the UK as The Year of the Ladybird in 2013) was released in 2014.

I met Joyce only a handful of times, most recently at the World Fantasy Convention in San Diego in 2011, where he entertained the Black Gate team — including Katie Redding, Scott Taylor, and I — with his stories and his relentless energy. A month ago Graham wrote of his diagnosis in a powerful post in his blog:

This is what I mean by the shocking clarity that cancer brings… if a dragonfly buzzes my ear like an aeroplane I’ll still be going, ‘What did it say?‘ Because the screw that has for so long been loose in me hasn’t been tightened by cancer. Actually I know what the dragonfly said. It whispered: I have inhabited this earth for three hundred million years old and I can’t answer these mysteries; just cherish it all.

And in turn the Heron asks, with shocking clarity as it flies from right to left and left to right: why can’t our job here on earth be simply to inspire each other?

Graham Joyce died on September 9th, at the age of 59. He is survived by his wife Suzanne and their two children. He will be missed.

That is a really powerful quote…