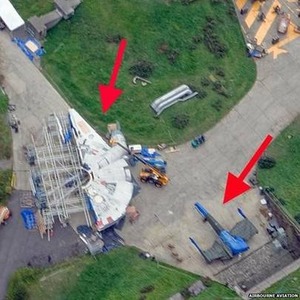 Where Star Wars is concerned, even a goth chick can go fan-girl.

Just in from the UK today: A pilot taking publicity photos for a flying school accidentally buzzed one of the sets of the new Star Wars movie with pretty impressive, if unintentional, results.

Matthew Myatt originally thought his pictures were of experiment aircraft at the Greenham Common airfield in Berkshire, England. Greenham Common is a former RAF airbase. Myatt was photographing one plane from another and it wasn’t until he got back and started reviewing his images that he realized what he had captured: none other than a partially built Millennium Falcon and an X-Wing fighter.

It appears that, at least in part, director J.J. Abrams will use models for filming rather than pure CGI. As one excited fan wrote on www.theforce.net, “Who’d’ve guessed filmmakers still build physical models?” and “Looks like the Falcon got a paint job!”