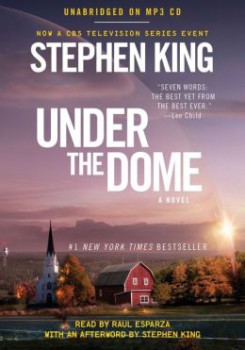 The CBS TV series adaptation of Stephen King’s 2009 novel Under the Dome went into its second season this summer. I haven’t watched the show, but I always thought the premise would make good television. Since the show clearly has a following, I figured I’d revisit my initial impressions of the novel. Up first is what I posted on Goodreads immediately after I finished the book in the summer of 2010. Following that are some additional thoughts as I look back four years later.

June 2010: In a way, this is The Stand on a small scale: specifically, the scale of one rural Maine town. At over 1,000 pages, however, the book’s scale is anything but small. Typical King, though — all the things that fans enjoy about his writing are here: a broad cast of characters, lots of pop-culture references, and everyday people suddenly thrust into a strange situation of survival-of-the-fittest.

Basic premise, if you haven’t already heard, is that the town of Chester’s Mill, Maine — population 2,000 — finds itself cut off from the rest of the world by a sudden, inexplicable, invisible dome that rises far up into the stratosphere and goes deep into the earth. Things, as you can well imagine, go to hell. What may be surprising is how quickly it does: in a matter of days, not weeks or months.

I won’t say anything about the ending, except to say I found it somewhat unsatisfying — King sometimes seems to have trouble wrapping up his books. They start with a bang and keep you turning the pages until the end, but the endings are often lacking in finesse.

One other pitfall that King falls into too much here is the tendency to break people into two camps: the white-hats and the black-hats, with villains so villainously drawn they could be twirling their curly moustaches as a train heads for a damsel tied to the train track. 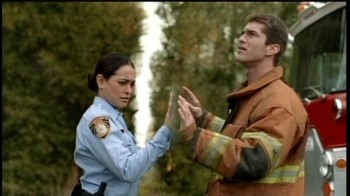 In that regard, he’s stuck in the Western/Disney mentality here: there must be a Captain Hook or a Cruella Deville for the pure-hearted good guys to fight. Just once, I’d like King to write an epic novel that is more like a Miyazaki film — where you think you know who the villain is, then that person does something sympathetic and you find yourself re-evaluating (take Princess Mononoke as a prime example: the villainess there, whom we root against on ecological grounds, shows a deep humanism that makes one feel conflicted. We wish to see some of her plans thwarted, while not being quite able to dismiss her as a one-dimensional villain). Yes, there are people out there who have no conscience, who are totally depraved, but they aren’t always necessary to turn the cranks of the plot. I wonder how much more layered and nuanced this novel might have been, had the lead “villain” of the story been someone who really thought he was doing what was best for people, rather than being a truly black-hearted megalomaniac.

August 2014 Addendum: Okay, pretty broad brushstrokes there. Let’s expand on that a bit, shall we? While I don’t remember such details as specific characters’ names four years later, I do still have a couple strong impressions. 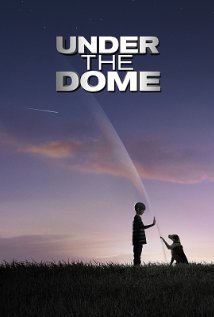 First, the beginning of this book rocked. One moment, everything’s normal. The next, a woman’s hand is sheared off in her garden, a plane explodes in the sky, and a character is looking at a groundhog sliced surgically in half — all these sudden events brought about by something completely invisible. I loved the human moment of two strangers who find themselves on opposite sides of the dome walking its circumference together to see if they can find a break in it.

King does have a way with setting up inexplicable and truly terrifying situations descending on ordinary folk. Opening chapters of King can exert such a strong grip on you that it’s often enough to keep you slogging through a weaker novel as the grip slackens on the way to a mediocre dénouement. Or something like that (I seem to have lost my grip on that metaphor, or that sentence, on the way to the end of it. But never mind. We haven’t much time; let’s keep going.)

Anyway, what’s also strange about the novel (and strange I didn’t mention it in my initial Goodreads notes) is how King, on this behemoth of a canvas — one the size of The Stand, but zeroed in on just a small population of one rural town — introduces so many plot threads that never go anywhere, are never even picked up again… [Minor spoilers ahead]

There is the body of a murder victim that is made to look like a Halloween scarecrow decoration and left sitting in someone’s front yard. People walk by and assume it’s just a dummy, and I, the reader, am thinking, “Oh boy, when is somebody going to make that discovery?” But nobody ever does.

There are the good guys who burn tons of plot and pages uncovering the corruption among key town leaders (who, it turns out, are running a meth lab, of all things!). That is all rendered moot before anyone can be brought to justice, or even confronted in some dramatic fashion.

There is even a psychic dog and a ghost who try to get key incriminating evidence found (no, I am not making that up). But the evidence is never found, and the dog and the ghost are similarly red herrings never brought up again.

Because [MAJOR SPOILER AHEAD] everything goes boom in a great, oxygen-sucking ball of fire before any of it can lead to some satisfying dramatic pay-offs. Like King got about 900 pages in and thought, “Hell, just blow it all up.”

Now, maybe herein lies some great existential commentary about how all of it — all the political machinations, the power grabs and manipulations, the struggles and the pushback, the whole kit-and-kaboodle — is really rendered meaningless when the plug is pulled, the button is pushed, the bomb is dropped. Great. But that’s not typical King, and it makes for some pretty unsatisfactory narrative when you’ve invested a thousand pages into a story.

So, for those who are investing themselves in the characters and the unfolding drama of the TV series, here’s hoping it plays out a little differently than the book.

Oz rating of UNDER THE DOME: 2.5 of 5 stars (the first third is a solid 4 stars; middle third slips to 3; underwhelming ending crashes and burns at about 2-star territory)

Though not my favorite, I can get into a King novel now and again. And, like you say, the beginning of his books can be so compelling that you’ll slog through mediocrity to see what happens.

I haven’t read Under the Dome, but I’ve seen the TV show and man was it atrocious. There’s actually some very good actors on the show but the scripts are often ridiculous, the dialogue can be absolutely terrible, and the characters’ actions make absolutely no sense some times. I gave up after the first season.

I thoroughly enjoyed the book. Yeah, it had the weak final arc that King is so often guilty of, and the resolution is a bit silly (not to mention a thematic device he’s used before – and better), but I enjoyed it.

As for the TV show . . . absolutely atrocious. It started out strong, but faltered quickly, and they’ve really struggled to drag it out for a second season. The wife and I just watch now to laugh and mock at all the stupid plot twists.

I’d read the book last summer and enjoyed it, for many of the same reasons already mentioned here, and also felt gypped by the weak ending. As for the TV show — right off the bat, the protagonist is burying a body he had in his car trunk, which does not exist in the book at all. A number of other changes occurred before the end of the hour, none of which I liked. I decided to give the show the benefit of the doubt, and tuned in again the following week. That was a mistake I did not repeat. I shut it off before watching half of it, and never tuned back in. I do understand the necessity of making occasional changes in translating book to screen, but too much of what was done to King’s novel altered the entire story for me. I’d rather re-read the book — or pick up a King novel I haven’t had the chance to read yet.

Looks like the consensus here so far is that the TV adaptation is atrocious. I’m glad I haven’t wasted any time on it! (I have been following The Strain, and the new season of Doctor Who just started, so I don’t have much time for many other shows on my DVR anyway.)

King adaptations to television, like film, have been all over the map in quality. I never watched Kingdom Hospital, although the premise sounded intriguing (not even the premise, but just the setting, really — a haunted hospital and all the story lines that could generate).

Nor have I followed Haven, although I did read the book that “inspired” the series, and I must say, just based on the weekly previews, this particular Syfy show will probably go down as the loosest “adaptation” ever. The ads make it clear that all sorts of paranormal activities are going on in this bizarre town, yet the original story was one of King’s non-paranormal works: a simple detective story about a body found on the beach. Clearly the producers thought, “Hey, we can use this setting, get King’s name on it, and then do whatever the hell we want.” That said, it may be a good series, and may even capture the “spirit” of King’s overall work, while having very little connection plot wise to its original source.

I only watched the first episode of the King version of Kingdom Hospital (and thought it was pretty bad), but I can put in a good word for the original Danish series – it’s very intriguing and well worth watching.