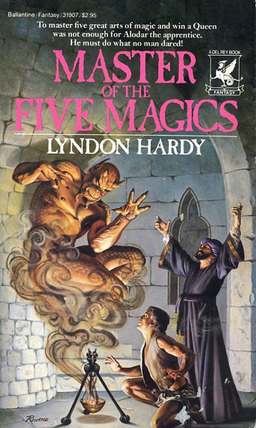 Over at The Huffington Post, author Jeff Somers (The Digital Plague, The Ustari Cycle) holds forth on fantasy worlds that are more appealing than the mega-successful Harry Potter series.

I was surprised to see his list consisted exclusively of vintage paperbacks, including Jack L. Chalker’s Midnight at the Well of Souls (1980), Piers Anthony’s first Xanth novel A Spell for Chameleon (1977), L. Frank Baum’s The Magic of Oz (1919), and Master of the Five Magics (1980) by Lyndon Hardy. Perhaps not coincidentally, all are part of a fantasy series. Here he is on the latter book:

I read this book as a kid, and the magic system Hardy creates remains one of the more interesting and entertaining ones out there. He imagines a universe that has (initially) five magical disciplines: Thaumaturgy, Alchemy, Magic, Sorcery, and Wizardry. Each form of magic has a clear set of rules that govern how it works. For example, Wizardry is the discipline that summons demons, and it has two rules: the Law of Ubiquity, which states that flame permeates all (making it a gateway between worlds), and the Law of Dichotomy, which states that once a demon is summoned it must either dominate the summoner or be dominated. All in all, a logical system that requires the protagonist to actually study and learn and think critically about the magic, instead of waking up one morning with the ability to turn people into newts or something.

Lyndon Hardy wrote two sequels to Master of the Five Magics: Secret of the Sixth Magic (1984) and Riddle of the Seven Realms (1988). He has not returned to fantasy since. Outside of fantasy, he is perhaps best known as the mastermind of the 1961 Great Rose Bowl Hoax.

I have to admit my first reaction is to boggle at his taste … I can see arguments for Oz and maybe the Lyndon Hardy books (which I haven’t read but look interesting), but, seriously, Chalker? Anthony?

But I think it’s fairly typical for a child of the 70s, really. This is top-selling fantasy from 1977-1980. Somebody was reading it.

There are certainly better fantasy series than Harry Potter, though Harry Potter is pretty good itself, but I wouldn’t trust anything regarding entertainment or culture coming from Huffington Post (i.e., click bait central).

I know a lot of people love the Xanth books, but I gave up on the first one before I got to the second chapter – it just a bit too coy for my taste. I do intend to have another go at it sometime. If I had to name an “underrated” fantasy world, it would be Terry Pratchett’s Discworld. Again, the books are hugely popular, but their very popularity – and humor – often obscures what excellent fantasies they are. Discoelrd is an amazingly detailed and surprisingly consistent and nuanced fantasy world.

I do like Harry Potter, but honestly if I was making a list of “better than Harry Potter”, Diane Duane’s Young Wizards books would be way up at the top.

If we’re limiting it to YA books (though Harry broke out of that category pretty quickly), how about John Bellairs’ supernatural mysteries? They deserve to be better remembered.

Yeah, The Huffington Post loves its click bait headlines, But its readership is massive — its Alexa raking is #20 in the US, above Netflix, Apple, and Tumblr — and I always think it’s worthwhile to pay attention when a mass media outlet shines a spotlight on fantasy. Especially vintage fantasy, a particular love of mine.

> I know a lot of people love the Xanth books, but I gave up on the first one before I got to the second chapter

Have to admit the XANTH books never really caught my fancy either. But they brought a whole new audience to fantasy in the 70s and 80s, readers who just weren’t interested in the kind of epic fantasy of Tolkien and his copiers, and I hugely respect them for that.

> If I had to name an “underrated” fantasy world, it would be Terry Pratchett’s Discworld.

Well said! Pratchett is very much underrated in the US, but I understand he’s a consistent bestseller in Britain.

> If I was making a list of “better than Harry Potter”, Diane Duane’s Young Wizards books would be way up at the top.

Have not tried them. But you did remind me that I should have given a shout-out to Diana Wynne Jones.

> How about John Bellairs’ supernatural mysteries? They deserve to be better remembered.

Seconded! Which reminds me, I keep meaning to do blog posts on the Lewis Barnavelt books (The House with a Clock in Its Walls, etc) and the Johnny Dixon titles (The Spell of the Sorcerer’s Skull, etc).

Unless I can talk Thomas into doing them…

I actually just read my first Bellairs a few weeks ago — The Face in the Frost — which raised the ever-valid question: Why the @$@#$ didn’t I pull this off my shelf and read it sometime in the previous 20+ years during which I owned it?!?!?

Joe, isn’t The Face In the Frost a dynamite book? It really should be on everyone’s list of Neglected Fantasy Classics. It’s one of those rare books that really merit the statement, “there’s nothing else like it.”

[…] last covered Jeff Somers when we linked to his Huffington Post article, Fantasy Series Better Than Harry Potter. We Are Not Good People was published by Gallery Books on October 7, 2014. It is 514 pages, priced […]