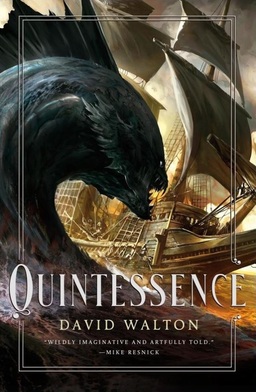 Quintessence is a story of the Age of Exploration, as it might have unfolded on a literally flat Earth where some of the wilder alchemists’ ideas were right. Here there be dragons. If you list all the cool stuff in this book, it looks like a sure bet for most fantasy readers: voyages at sea (doomed and desperate), houses of solid diamond, heresy, plucky young people changing the world, and monsters. Lots and lots of monsters.

In attitude, character, and pacing, however, the book feels more like science fiction in the tradition of John W. Campbell. I grew up reading that stuff — odds are that you did, too — so I found a great deal to enjoy in Quintessence. Just not quite the things I came to the book hoping to enjoy.

David Walton’s bestiary is worth the price of admission. The man knows how to fill a fanciful ecosystem, and if he had found some comic artist to collaborate with and had published a volume of the characters’ field notes, it would have been its own weird hit.

We have our earnest scientist and our mad one. We have our plucky maiden and her plucky suitor, both brilliant engineers whose talents for tinkering had gone unnoticed back in England. We have a sort of Greek chorus of thinking men whom the earnest scientific hero forms into a discussion society for brainstorming and peer review. For villains, we have a smarmy politician and a religious fanatic, who care nothing for science.

The one character who felt, to me, to be truly fresh is the older woman struggling to launch her almost-grown daughter into the world. In earlier generations, or in the hands of a less thoughtful writer, such a character might have been cardboard thin or, more likely, conveniently dead. David Walton knows how to see the Women Men Don’t See, and the book’s whole cast is liveliest and least predictable toward the end when the most heroic of the men really start to see them, too. I just wish that liveliness had kicked in sooner.

Stylistically, Walton plays it safe, rendering the characters’ thoughts and dialogue in a modern diction that makes no attempt to sound like it belongs in the 16th century. Yes, this is a better choice than aiming for the 16th century and instead sounding like some backwater renaissance fair. Not every writer can do what Susanna Clarke or Naomi Novik do, tinting every sentence with the diction of a borrowed century. The result of David Walton’s decision to avoid the risk of his characters speaking forsoothly, though, is a slight flatness of voice reminiscent of television dialogue. Once he chose to write in a fantastical version of a real historical period, Walton had a tough writerly predicament to deal with, one I don’t envy him.

The book’s pacing is fast, with the steady ratcheting-up of tension that publishing houses love. It’s a fast read, and though it’s the start of a trilogy, it could stand alone just fine. In what time the book has, it lavishes its attention on some fascinating what-ifs, many of which read like hard science fiction that happens to have been written on a flat Earth in an alchemical cosmos. And if I wish the book had slowed its pace enough for its characters to develop more fully, well, my readerly ideal is a thousand-page doorstopper in a series of thousand-page doorstoppers. Quintessence succeeds on its own terms, which are unusual enough to deserve a chance with pretty much any reader of science fiction or fantasy.