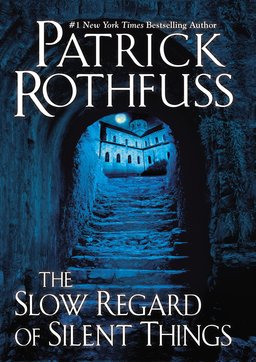 Patrick Rothfuss’s The Kingkiller Chronicle includes only two volumes so far — The Name of the Wind, reviewed for us by Robert Rhodes, and the Gemmel Award winner The Wise Man’s Fear — which doesn’t make it much of a chronicle by fantasy standards, really. But it has already vaulted into the front rank of modern fantasy, with great critical acclaim and a growing body of fans. Expectations are high for the third volume.

Now comes word that Rothfuss’s next book, featuring a character from the previous novels, is not the long-awaited third volume in The Kingkiller Chronicle. Instead it’s a novella featuring Auri, former student at The University, titled The Slow Regard of Silent Things.

This is the second of three novellas set in Temerant (known as the Four Corners of Civilization in the novels) that Rothfuss reportedly has planned. The first, “The Lightning Tree,” was centered on Bast and was recently published in Rogues, the massive heroic fantasy anthology edited by George R.R. Martin and Gardner Dozois. The third, a very lengthy (100,000-120,000 words) volume featuring Laniel Young-Again, has not yet been officially announced.

The upcoming third volume in The Kingkiller Chronicle, The Doors of Stone, has a title but no firm release date.

The Slow Regard of Silent Things will be released as a standalone hardcover by DAW this October. Here’s the book description.

Deep below the University, there is a dark place. Few people know of it: a broken web of ancient passageways and abandoned rooms. A young woman lives there, tucked among the sprawling tunnels of the Underthing, snug in the heart of this forgotten place.

Her name is Auri, and she is full of mysteries.

The Slow Regard of Silent Things is a brief, bittersweet glimpse of Auri’s life, a small adventure all her own. At once joyous and haunting, this story offers a chance to see the world through Auri’s eyes. And it gives the reader a chance to learn things that only Auri knows….

In this book, Patrick Rothfuss brings us into the world of one of The Kingkiller Chronicle’s most enigmatic characters. Full of secrets and mysteries, The Slow Regard of Silent Things is the story of a broken girl trying to live in a broken world.

I knew about this book coming out and I knew that it was not the next installment of the Kingkiller Chronicles; but I did not know that it was going to be about Auri. Very interesting.

Rothfuss has so many mysterious and intriguing characters in his world that it seems to me that he could write a whole series of similar novels or novelettes.

Hadn’t heard that the third book had a title yet. Excellent! It’s a step in the right direction, at least. 🙂

> Rothfuss has so many mysterious and intriguing characters in his world that it seems to
> me that he could write a whole series of similar novels or novelettes.

I don’t doubt it. But since he’s got thousands of fans clamoring for the next KINGKILLER volume, I suspect the real trick is to resist the temptation to do exactly that!

> Hadn’t heard that the third book had a title yet. Excellent! It’s a step in the right direction, at least.

Indeed. Our Bothan spies have no more to share with us at this point, but they promise to keep digging.