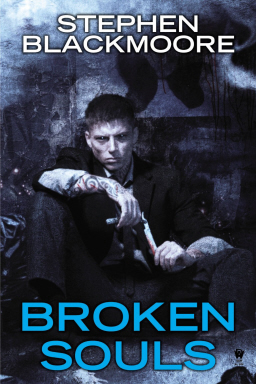 I covered Stephen Blackmoore’s first hard-boiled detective zombie novel, Dead Things, last February. It was an obvious candidate for a series, and 17 months later a sequel has finally appeared.

This isn’t the first time Blackmore’s written about LA undead. His first novel, City of the Lost (January 2012), featured Joe Sunday, killed by the rival of his crime boss and returned as a zombie to carry on as LA lowlife. If you’re a fan of necromancers, crime novels, or the darker side of LA, Stephen Blackmoore is definitely your guy.

His link to the Aztec death goddess is changing his powers, changing him, and he’s not sure how far it will go. He’s starting to question his own sanity, wonder if he’s losing his mind. No mean feat for a guy who talks to the dead on a regular basis. While searching for a way to break Santa Muerte’s hold over him, Carter finds himself the target of a psychopath who can steal anyone’s form, powers, and memories. Identity theft is one thing, but this guy does it by killing his victims and wearing their skins like a suit. He can be anyone. He can be anywhere.

Now Carter has to change the game — go from hunted to hunter. All he has for help is a Skid Row bruja and a ghost who’s either his dead friend Alex or the manifestation of Carter’s own guilt-fueled psychotic break. Everything is trying to kill him. Nothing is as it seems. If all his plans go perfectly, he might survive the week.

Broken Souls will be published on Tuesday by DAW Books. It is 264 pages, priced at $7.99 in paperback and $6.99 for the digital version.