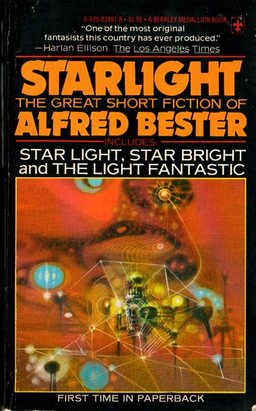 There was a time when Alfred Bester was considered one of the top writers in science fiction and fantasy.

I know. You’ve never heard of Alfred Bester. Perhaps his greatest novel — The Stars My Destination (1956) — is in print only in an expensive trade paperback edition from a small press, and his classic The Demolished Man (1952), the first novel to win a Hugo Award, is out of print altogether.

Bester’s reputation was not built entirely on his novels, however. Before he stopped writing SF, he produced a number of brilliant stories, including “Fondly Fahrenheit” and “Adam and No Eve.” His short fiction was gathered in two hardcover collections, The Light Fantastic (1976) and Star Light, Star Bright (1976). Neither had a paperback edition in the US, and both are now long out of print.

Fortunately, they were collected into a huge omnibus edition, Starlight: The Great Short Fiction of Alfred Bester, published in a handsome paperback edition by Berkley Medallion in July, 1977. It’s also out of print, but not particularly hard to find — and well worth the effort.

Here’s the complete table of contents for Starlight.

Starlight: The Great Short Fiction of Alfred Bester was published by Berkley Medallion in July 1977. It is 452 pages, originally priced at $1.95. The cover is by Richard Powers. Copies are generally available online for less than the cost of a new paperback.

Even though Grand Master was presented posthumously, he did at least learn about the honor before his death.

There is a Bester short fiction collection in print. Virtual Unrealities is a reasonably priced paperback that almost reproduces Starlight’s selection.

> Even though Grand Master was presented posthumously, he did at least learn about the honor before his death.

I wasn’t aware of that. How did you learn that? I’m glad to hear it.

Both THE DEMOLISHED MAN and THE STARS MY DESTINATION were originally serialized in Galaxy, and 1952 and ’56. I’m looking forward to your review when you hit those issues, Matt!

True! I was tempted to buy it, but the contents are awfully similar to STARLIGHT.

I think I read it on Wikipedia. Yeah, my next review covers part 1 of “The Demolished Man”.

I didn’t realise Bester’s reputation had faded to such an extent – perhaps this is more true in the US? Both ‘The Demolished Man’ and ‘Tiger Tiger’* are in the S.F. Masterworks series and I spotted both in my local bookshop only last week. My copies (long since lost) had the Chesterman covers – boy, that guy knew how to wield an airbrush!

* the alternative title of ‘The Stars My Destination’ in the UK at the time. They now use the original title.

The Stars My Destination ranked as the 9th greatest 20th century SF novel in the recent Locus poll. The Demolished Man came in at 52nd. I think Bester’s name is still a potent one for older fans, but “genre memory” in SF is not what it once was, and younger readers just aren’t familiar with him. This is ironic, since so much recent SF film is beholden to him; his stories are intensely visual, and Brian Aldiss called his kind of writing “widescreen baroque,” which pretty well describes movies like The Fifth Element and Bladerunner (which visually was more Bester than Dick).

I’ve never read any Bester. But as far as still being an influence, I note that his “The Stars My Destination” was included in the American Library American Science Fiction: Nine Classic Novels of the 1950s edited by Gary Wolfe and published in 2012.

When those volumes came out a couple of years ago I remember hearing (on several podcasts) how influential and good Bester was. Those discussions of Bester really intrigued me at the time.

You should definitely give him a try, James. His best stuff is still cutting edge – The Stars My Destination and The Demolished Man do not feel like sixty year old books.

I rank two of these stories — “5,271,009” and “Fondly Fahrenheit” — as among the greatest SF stories ever, and others are nearly as good (“The Pi Man” and “They Don’t Make Life Like They Used To” in particular).

As for Bester’s Grand Master (well deserved), the story I heard was that he was known to be dying, essentially of alcoholism. (He left his money to his bartender.) SFWA decided to name him Grand Master, and hurried to tell him before he died.

> I didn’t realise Bester’s reputation had faded to such an extent – perhaps this is more true in the US?

I think that’s probably likely. The bulk of his work has been out of print here since Vintage last reprinted his major novels in 1996/97… that’s 17 years, an eternity in publishing. That means most readers under 30 have never encountered Bester at all in the US.

Glad to hear that’s not the case in the UK. The SF Masterworks series in particular has done marvelous work keeping the classics in print. I wish they were more readily available in the US.

> Brian Aldiss called his kind of writing “widescreen baroque,” which pretty well describes movies like
> The Fifth Element and Bladerunner (which visually was more Bester than Dick).

I love that phrase — “widescreen baroque” — and it definitely suits The Fifth Element and Blade Runner! I would also apply it to GUARDIANS OF THE GALAXY, which I saw yesterday, and which I think was strongly reminiscent of The Fifth Element.

> I note that his “The Stars My Destination” was included in the American Library American Science Fiction: Nine Classic Novels of the 1950s
> edited by Gary Wolfe and published in 2012.

I forgot all about that! I guess THE STARS MY DESTINATION isn’t really out of print after all, then. 🙂

I quite enjoyed “Fondly Fahrenheit,” but I have absolutely no recollection of “5,271,009″… I’m looking forward to re-reading it!