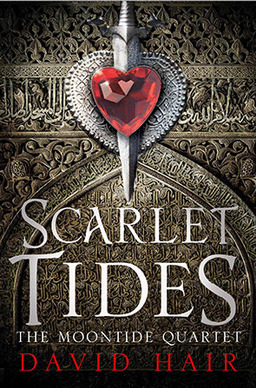 I keep discovering interesting series with the second volume. I think it’s some kind of curse. When I was born, three fairies attended my christening. The first said, “Oh, crap. I didn’t bring a gift. Um, tell you what, John will be blessed with a love of reading.” And the second said, “That’s a good idea. And just for good measure, he’ll always be surrounded by books.” And the third, whom my parents had clearly offended somehow (seriously, who can figure out fairies?) said, “I curse this brat. He shall always discover great fantasy series with the second volume.” Fairies. Don’t invite them to parties and your life will go a lot easier.

My latest discovery is The Moontide Quartet by David Hair, which began last year with Mage’s Blood. Which I only learned recently, after I started reading the Advance Proof for the second volume, Scarlet Tides. Somewhere, a fairy is laughing.

In the exciting second volume of The Moontide Quartet, a scarlet tide of Rondian legions is flooding into the East, led by the Inquisition’s windships flying the Sacred Heart (the bright banner of the Church’s darkest sons). They are slaughtering and pillaging their way across Antiopia in the name of Emperor Constant. But the emperor’s greatest treasure, the Scytale of Corineus, has slipped through his fingers and his ruthless Inquisitors must scour two continents for the artifact, the source of all magical power.

Against them are arrayed the unlikeliest of heroes. Alaron, a failed mage, the gypsy, Cymbellea, and Ramita, once just a lowly market-girl, who have pledged to end the devastating cycle of war and restore peace to Urte.

East and West have clashed before, but this time, as secret factions and cabals emerge from the shadows, the world is about to discover that love, loyalty, and truth can be forged into weapons as powerful as sword and magic.

Wait, your fairies gave you gifts? Mine just drank all the holy water and got in knife fights with my relatives!
This one doesn’t sound quote dark enough for me, though, and all that stuff about friendship and trust and stuff kind of made me cringe. I can see the appeal: fantasy has been pretty miserable lately, all that rape and murder and deceit, all those morally ambiguous heroes. I can see how this would be refreshing, just doesn’t seem like my cup of tea 🙂

My fairies gave me a love of reading, excellent recall for things I’ve read…and the slowest reading speed this side of elementary school. Hm. Actually, it was grad school that broke my reading speed, now that I think of it. Whichever fairy tricked me into grad school owes me an explanation.

I know you like your fantasy dark, but there’s some cool stuff in this one. If you’ll allow me to quote from Sarah’s review:

“The world of Mage’s Blood is a sort of fever dream of Europe and its Near East, if the Mediterranean and Black Seas were impassably vast and the Bosphorus were hundreds of miles wide. East is east and west is west, and the twain meet only for two years out of twelve, when the moon–which in this world is close enough to Earth to fill a third of the sky–causes a localized low tide. The greatest feat of magic and engineering in history, the Leviathan Bridge, rises from the waves during the Moontide.”

I think you’ll find something to appeal to your darker sensibilities. 🙂

And you’re right, I plumb forgot your review when I pulled this article together. I will drop in a link.

Well, I read the review, which was great by the way, and I’d have to agree with you john; this sounds pretty good, although I have a niggling feeling that I won’t get around to reading this; I still have an irritatingly long, and ever expanding, reading list. Still though, that giant bridge and world changing, chilling magic sounds like all sorts of awesome. 😀