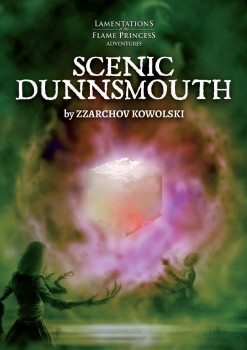 I have a complicated relationship with adventure modules.

As a someone introduced to Dungeons & Dragons during the Fad Years of the late ’70s to early ’80s, TSR Hobbies was only too glad to satiate my appetite for all things D&D with a steady diet of ready-made scenarios to inflict upon my friends’ characters. I had a lot of fun doing so and, even now, more than three decades later, some of the fondest memories of my youth center around the adventures those modules engendered. Having spoken to lots of roleplayers over the years, I know I’m not alone in feeling this way. Indeed, I’d go so far as to say that one of the most important functions of TSR’s modules was creating common experiences that gamers across the world could share. To this day, I can mention the minotaur in the Caves of Chaos or the juggernaut from Acererak’s tomb and players of a certain vintage know exactly what I mean, because they, too, have had to deal with these threats.

At the same time, there’s a part of me – a snobbish part of me, I suppose – that looks down my nose at “pre-packaged” scenarios, seeing them as the adventure design equivalent of fast food. This elitist part of me prefers “home made meals,” created by the referee from hand-picked ingredients and prepared using original recipes. Anything less than that is a concession, whether it be to mere practicalities, such as time, or something far worse, such as a lack of imagination. Such pomposity wonders, “If you can’t be bothered to make up your own adventures, why would you dare to present yourself as a referee?”

I’ve favored each of these positions, to varying degrees, at different times in my life. It should come as no surprise that the “adventure modules are for the unimaginative” position was something I adopted most strenuously in my later teen years, whereas the “Cool! Queen of the Demonweb Pits!” position was what I adopted earlier. Nowadays, I’m more fond of adventure modules than I have been in quite some time, in part, I think, because there are a lot of really good ones being produced these days. A good example of what I’m talking about is Zzarchov Kowolski‘s Scenic Dunnsmouth, published by Lamentations of the Flame Princess in Finland.

Though written for use with Lamentations of the Flame Princess Weird Fantasy Role-Playing, Scenic Dunnsmouth is easily adapted to “other traditional role-playing games,” which is to say, to any class-and-level fantasy RPG descended from or inspired by TSR-era Dungeons & Dragons. Because it’s actually fairly light on game mechanics, I suspect it could probably be used with many other RPGs, too, including some that differ a bit more from old school D&D. I myself use a house-ruled version of Labyrinth Lord in my own games and I see no difficulties in using this module. In fact, I look forward to doing so soon, since I’ve already had a lot of fun preparing it. That’s a big part of why I regard Scenic Dunnsmouth so highly: it’s got a lot to offer the referee even before he sits down at the table to use with his friends, as I’ll explain shortly. 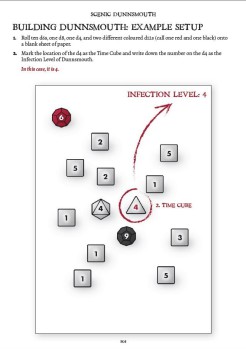 As you might expect, given its title, this module evokes Lovecraftian themes, though it is not a “Cthulhu Mythos adventure” in the straightforward (and, in my opinion, boring) sense of including monstrous foes from HPL’s menagerie or name-dropping blasphemous tomes from the Old Gent’s library. Instead, it deals with Man’s encounter with the alien and the hidden corruption that results. In the interests of not revealing too much about the module itself, I will simply say that the portmanteau name of the adventure locale is well-chosen. Gamers familiar with The Shadow over Innsmouth and The Dunwich Horror will thus have some premonitory insight into the doom that’s come to Dunnsmouth. Note that I say “some,” for the genius of this module is that each and every time it is used, the experience is very likely to be unique.

Unlike, say, The Village of Hommlet or The Secret of Bone Hill – two classic adventures set in small, out-of-the-way towns – Scenic Dunnsmouth includes no map of its environs. Instead, the referee creates the map through the casting of dice onto a blank sheet of paper, as shown by the image to the left. Both the locations of the dice and the numbers they generate play a role in determining the nature of the town. Each six-sided die, for example, represents the location of a single home, while the eight-sided die represents the location of the town’s church. The actual inhabitants of each home are determined by the use of a deck of cards, with each card keyed to a household consisting of one or more persons, all them described and illustrated, as you can see by looking at the image to the right (though don’t look too closely if you don’t want any details of the adventure revealed).

Because of the limited number of dice rolled and the large number of potential households, odds are good that no two Dunnsmouths will ever be exactly alike. Furthermore, the numbers shown on the dice have an effect too (forgive me for not specifying what that effect is), meaning that, even in towns with many of the same inhabitants, there will be differences. Likewise, the two twelve-sided dice represent “kickers,” which are essentially wild card locations (and inhabitants) that may or may not be present and thus add yet another layer of potential difference.

There is thus no “canonical” Dunnsmouth with facts known to any and all who play the module. Every time this module is run, even by the same referee, it is a different place, sometimes profoundly so. In that respect, it’s quite unlike previous modules that include some random placement elements, like TSR’s Ravenloft. While Ravenloft used a deck of cards to randomize a few minor elements, its overall feel remains the same regardless of the results. The cards are mostly a gimmick intended to simulate a Tarot reading by a Gypsy fortune teller. Scenic Dunnsmouth is quite different, as the random elements have a much more profound effect on what and who the characters encounter when they visit the town. Rather than being cosmetic, they are in fact foundational,

Speaking as a referee, generating Dunnsmouth is at the root of the appeal of this module and I found myself creating several different versions of the town in my spare time, choosing the one I found most interesting (even as I continue to generate more and change my mind yet again). It’s a fun little mini-game in its own right, not unlike creating characters or subsectors for Traveller. Of course, it has a great deal more to offer, including not one but two potential central mysteries, intriguing NPCs, and a compelling atmosphere of miasma and doom. Kowolski excels at painting pictures of creepy rural locales at the edge of civilization, where “the Old Ways” and the new exist uneasily side by side. It’s all the more impressive an accomplishment, I think, because he succeeds in doing this despite the fact that “your Dunnsmouth may vary.”

Scenic Dunnsmouth is a 112-page A5 volume that’s profusely illustrated by Jez Gordon. It’s available in both print and electronic form. I own the print version, both because I’m a Luddite and because, as a physical artifact, it’s absolutely wonderful. The combination of the book’s size (it’s easy to carry around), the paper quality (a bit thicker than is typical for RPG books and it’s not glossy, thank Crom), and the attractive layout (which makes judicious use of red in addition to black and white) is a winning combination in my opinion. Of course, such luxuriousness doesn’t come cheaply; the module is a bit more expensive (7.69€  for the PDF and 19.25€ for the book) than notoriously skinflint gamers may like. For myself, I’m willing to pay a little more when it comes to books from which I’ll get a lot of use. Scenic Dunnsmouth is such a book.

[…] RPG work. Furthermore, the book was to be released through Lamentations of the Flame Princess, whose products are always “different” from the usual fantasy fare, both in terms of content and – especially – […]