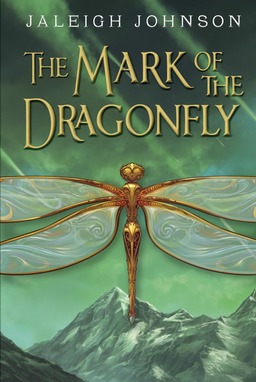 Thirteen-year-old Piper has two goals: make enough money to get away from her impoverished scrapper town and to see the world. She knows it’s unlikely to accomplish either by selling the trinkets that periodically rain from the sky. She’s never known anyone who got rich selling the assorted mysterious artifacts that found their way from other worlds to hers via unexplainable meteor showers. Instead, Piper earns money by working as a machinist. She can fix anything anyone brings her, even objects that other machinists deem beyond hope. She makes enough to survive by fixing mechanical oddities, but she knows that she won’t realize her dreams doing that, either.

When Piper finds a girl with a Dragonfly tattoo on her arm after a meteor storm, Piper believes she has found her ticket out of town. The tattoo signifies the girl — Anna — is protected by the King of the Dragonfly Territories, and so Piper assumes there must be a reward for her return. They escape the scrapper town by jumping aboard the 401, a train that Piper has always dreamed of riding. Once it becomes apparent that Anna isn’t who she seems, Piper must decide which is more important — living her own dreams or protecting a girl with dangerous enemies.

Full disclosure: Johnson and I are both members of the All Rights Reserved writing group. I’ve loved this book since it was nothing more than a map and a vague concept about trains and otherworldly treasures. I’m happy to report that reading Dragonfly in its published form is even more captivating as the first read through.

Johnson has created a world with dystopian, steampunk, and fantasy elements. She blends mechanical oddities and shapeshifting creatures so seamlessly that it’s easy to imagine this world exists. In the hands of a lesser author, mixing these elements could have been a jumbled, chaotic, stereotypical mess; instead, Jaleigh makes it look easy.

The characters are fully realized individuals that complement each other. Piper makes quick decisions; Anna is analytical and processes the world around her by thinking out loud; Gee, a body guard on the 401 that is about the same age as the girls, has a quiet strength. The dynamic between the three evolves naturally as the story unfolds. Piper and Gee’s antagonistic relationship morphs into a budding romance and Piper comes to see Anna as a sister rather than a meal ticket. Each relationship has enough tension to keep things interesting without dominating the story, which is a hard balance to strike. Again, Johnson makes it look easy.

Speaking of story, Dragonfly’s is flawlessly executed. Johnson keeps the stakes high and the story moving with deft use of tension and pacing. As the novel progresses and Piper and Anna’s situation becomes direr, I felt compelled to keep reading, even though I had read it before, which is a high praise indeed. Young and old readers of fantasy will enjoy The Mark of the Dragonfly, and I recommend it.