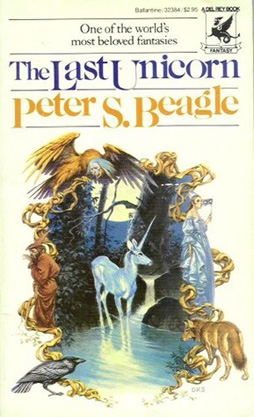 In 1962, Peter S. Beagle began writing a fantasy novel he called The Last Unicorn. Published in 1968, the book was both serious and whimsical, a kind of extended fable about a unicorn who found she was the last of her kind and adventured through a medieval fantasyland, possibly Irish and possibly not, in search of the wicked king holding all other unicorns captive. The tone embraced both the comic (one of the major characters is an incompetent magician named Schmendrick) and the dreamlike (as in the terrifying Red Bull who emerges as a crucial antagonist). The book’s a tremendous accomplishment, a vivid working-out of classic fantasy themes.

In 1982, Rankin/Bass Productions released a film version of the book, with a screenplay by Beagle. The designs had a nice touch of art nouveau, the voice cast was strong (including Mia Farrow, Angela Lansbury, Jeff Bridges, and Christopher Lee) and the plot was remarkably faithful to the book. That approach had its strengths and weaknesses: the fable-like quality of the original story was lost. On the other hand, the literalness of the adaptation gave the film a quality of strangeness of its own — by maintaining the shape of the book, it created a shape unlike most other movies.

Beagle is currently touring with a digital 2K print of the Last Unicorn movie, presenting it at showings with a question-and-answer period and an opportunity to buy Beagle’s books and Last Unicorn-related merchandise. The tour will go on through April 2016 and will visit Australia, New Zealand, Japan, Ireland, the UK, and Germany, as well as cities across North America. An extensive Canadian leg of the ongoing Last Unicorn tour has just wrapped up; I saw a showing of the film in Montreal, on Sunday, May 18, and took a few notes. 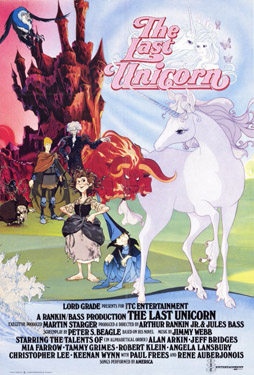 As I approached the theatre, I saw the long merchandise table in the hall outside. It was packed with a wide range of goods: earrings, DVD/Blu-ray packs, prints, wands tipped by a unicorn’s head (each hand-made by a Canadian artist), tote bags and t-shirts with the entire text of the novel printed in microscopic size so as to create an image out of the words, and of course books. There was a special edition of the original novel and short story collections by Beagle featuring other fictions of unicorns and sequels to the original tale.

The theatre quickly grew packed. It looked like a full house and some of the audience had come in costume. There were unicorns, a Red Bull, even a tree. The age range was notably wide: there were parents bringing kids, but there also seemed to be a number of people in their teens and twenties.

Beagle’s business manager Connor Cochran took the stage to introduce the event. An energetic and clearly experienced speaker, he gave details about the items for sale and mentioned that the tour was also raising money in an attempt to be carbon neutral — they’re working with Trees For the Future to plant trees to offset gas burned during the tour and had already financed the planting of 100,000 trees. Cochran also spoke about showing the film in a New Mexico theatre owned by George R.R. Martin, a friend of Beagle’s; a special print of Haggard sitting on the HBO version of the Iron Throne is for sale with proceeds going to help small theatres convert to digital projection. 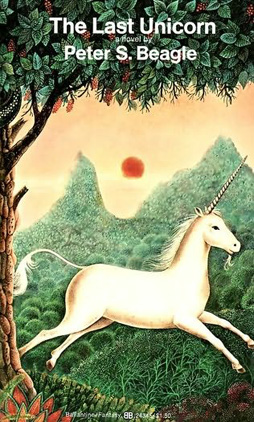 Cochran then introduced Beagle, who came out to much applause, and took questions from the audience. Beagle was a thoughtful, dryly witty speaker, seeming at home in front of the microphone and the crowd. In answer to a question about his input into the visuals of the movie, Beagle revealed that he in fact had no input beyond writing the script. He added that he felt he was well-served by a group of actors that loved the book; Christopher Lee (King Haggard) apparently learned it by heart. He later noted that he wrote the script for Ralph Bakshi’s version of Lord of the Rings — “[It was] long ago, and I think of it as my adventure with Crazy Ralphie.”

Asked about a live-action version of the Last Unicorn movie, Beagle stated that “I have definite expectations that a live-action film will happen.” The current holder of movie rights to the book apparently has no desire to do anything with them, but the rights will revert to Beagle in February 2015. There has already been interest expressed in making a live-action film and plans are currently afoot. Someone asked whether Beagle would be interested in having the film of his book directed by Peter Jackson, who was introduced to The Lord of the Rings by the animated version scripted by Beagle; to much applause Beagle noted that “I’m a little dubious, much as I like Jackson, about somebody who can stretch a children’s book into an epic trilogy.” At any rate, Beagle did promise to be involved with the live-action Last Unicorn screenplay.

Beagle told one questioner he was surprised by the success of the animated movie: “I hated everything I’d ever seen by Rankin and Bass,” he recalled, specifically mentioning their films of The Hobbit, Frosty the Snowman, and Rudolph the Red-Nosed Reindeer. But he was happy with their choice of composer for the film, and with the actors, many of whom were already favorites of his. “It took a while to realise it was that good,” he said.

Asked about the writing of the book, he remembered how a cat sleeping on his desk found his way into the chapter he was writing at that moment. Beagle said he could never write anything that wasn’t funny and also in some way bittersweet, remembering how he learned an attitude of ‘I laugh that I may not weep’ from the Jews, Blacks, and Irish in the New York City neighbourhood where he grew up. He said that his favourite line in the book was “There are no happy endings because nothing ends.”

Asked about his screenplay, Beagle admitted that he regretted not being able to fit in a scene from the novel set in a town under Haggard’s rule, explaining the curse upon Haggard’s land and setting up the backstory of some of the characters. He observed that “animation hates backstory,” something he had difficulty with in writing the Lord of the Rings script — as the book, he said, is 90 percent backstory. For Beagle, things in animation need to be in motion, which is why he’d like to write the script adapting his book for live action: “I could do a lot more with things that don’t have to be moving every second.”

That concluded the question-and-answer period, after which some pieces of Last Unicorn merchandise were raffled off. At the conclusion, the winner of the last prize was brought up to the front with Beagle, who said a few concluding words. He remembered starting to write the book in 1962 with what became the opening words: “The unicorn lived in a lilac wood, and she lived all alone.” In doing this, he unwittingly did something new to literary tradition: created a female unicorn. In searching through tales of unicorns from around the world, spanning thousands of years, Beagle and Cochran have not found a mention of a female unicorn before 1962.

The screening of the movie followed. The crowd was enthusiastic, if not particularly vocal, and afterwards thronged to the merchandise table. What stays with me from the showing is the passion of the fans, and the lasting popularity of the film and story. It bodes well for the success of a live-action version of the tale. Whether it’s made or not, it seems that the tale’s taken root. The novel’s a classic of the fantasy field; it’s good to see that the animated adaptation’s still helping bring it to new audiences.

Alas, the tour has already been through the DC area and moved on. I’m glad to see, though, that the conversation Beagle and Martin had with the audience at Martin’s theater in New Mexico was filmed, and that the video will be available. Thank you for calling our attention to the tour.

My pleasure, Sarah! And great point about the filmed conversation. More information about the tour is available through the first link in the story — or just cut-and-paste the following:

And information on much of the merchandise is available here:

I’m really glad to see this. I’m quite fond of the animated film, and bought it on DVD to introduce my children to it. The book is a classic of the field, and I included it on my core syllabus for a college introduction to fantasy literature. (And I own the soundtrack CD — which I had to order from Germany because they never released it in the U.S.! I love the title song by the band America, as well as “Walking Man’s Road.”)

What a moving book “Last Unicorn” is. I read it so long ago that I remember almost nothing about it, except that it hit me harder emotionally than most other books I’ve ever read.