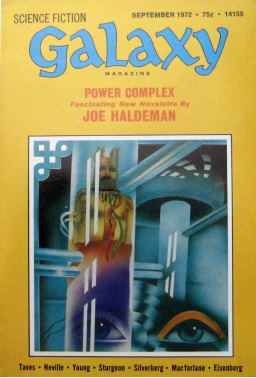 I don’t usually look at magazines quite this recent in these reviews… though now that I think about this, this issue appeared well over 40 years ago! It’s a fairly significant issue in context, though coming from a period in Galaxy’s history usually disparaged.

This period was the editorship of Ejler Jakobsson, which extended from 1969 to 1974. He succeeded Frederik Pohl, and preceded Jim Baen, two extremely important figures in SF editing. Indeed, the only other editor of Galaxy before Pohl was H. L. Gold, yet another absolutely central SF editor. So Jakobsson was bound to have a hard time being compared to that crowd. A number of writers complained that Jakobsson was an editorial meddler (ironically, the same complaint was often made of Gold).

I confess I have never thought much of Jakobsson’s reign myself. I began reading Galaxy in October 1974, shortly after Baen took over. And I loved Baen’s Galaxy. The few issues of Jakobsson’s I’ve seen before this one have been rather dull.

I often have read words to the effect that he knew little or nothing about SF, but that’s not quite true. He was Finnish and emigrated to the US in 1926, aged 15. In the ’40s, he worked on the magazines Astonishing Stories and Super Science Stories, and indeed edited the latter for a couple of years starting in 1949. But he had been out of the field since that time – so perhaps it was more accurate to say he knew little about then contemporary SF.

He did have a couple of important assistants: Judy-Lynn Benjamin was Managing Editor and Lester Del Rey was Features Editor. (Del Rey and Benjamin married later, of course, and co-founded the Del Rey Books imprint.)

The cover of this issue is by Brian Boyle, an artist with whom I am not familiar. Interiors were uncredited, though many of them appear to be by Jack Gaughan. Features include Galaxy Stars, a very brief author profile (this time of W. Macfarlane); Galaxy Bookshelf, a book review column conducted at this time by Theodore Sturgeon; and Directions, the lettercol. There is also a brief editorial by Jakobsson, complaining about postage increases. 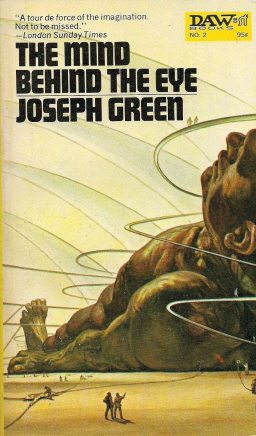 Sturgeon reviews a longish list of books (10). Notable is a very favorable review of chum Joseph Green’s The Mind Behind the Eye:

My favorite for the month and probably for a long time to come… Green brings in sex without a giggle or a blush… not since Robert Young has there been a writer who envisions the gigantic as awesomely and specifically as Green.

The letters in Directions, by Judith Hochberg and Charles Gifford, Jr., are in response to an earlier letter from Cy Chauvin, in which Chauvin apparently insisted that Science Fiction should “have a purpose.” The Hochberg and Gifford disagree.

Here’s the TOC for the fiction: 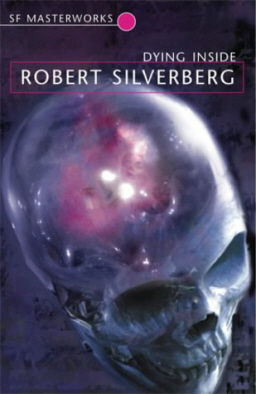 To consider the serial first, it’s obviously a major major work, a Hugo and Nebula nominee, recipient of a Special Award for Excellence in Writing from the Campbell Award committee, and a novel that regularly shows up in Locus Polls as one of the best SF novels ever.

It’s the story of David Selig, a telepath who is losing his telepathic ability as he ages. Wrenching and very real seeming, very well depicted. I assume this serial version may be cut – the two parts would have run to something like 60,000 words. At the very least, the serial version was bowdlerized.

“Power Complex” is the other story in the novel from a Grand Master. But it’s from very early in Joe Haldeman’s career and it’s not very good. It’s about a very powerful shapechanging alien who becomes President of the United States as part of his education. I didn’t find it very plausible, even on its own terms, and I found the political details profoundly unconvincing.

Haldeman didn’t collect it until A Separate War and Other Stories in 2006, which contains mostly stories from 1995 on, but also his first published story, “Out of Phase” (1969), “Power Complex,” and a previously unpublished piece written around the same time.

I thought perhaps he thought the stories weak as well, and only collected them late for sort of completist reasons, but he reveals in the story notes in that book that he had intended to turn “Out of Phase” and “Power Complex” into a novel, could never make it work, and then realized after looking at them again that in fact his novel Camouflage (2004) actually bears a certain resemblance to “Power Complex,” putting paid once and for all to the idea of it becoming a novel.

Haldeman also tells the story of his first sale, “Out of Phase.” Apparently, he sent it to Fred Pohl at Galaxy, and Pohl rejected it, but told him he’d take another look if he boiled down the first four pages to one page. Haldeman boiled them down to one word instead, and sent them back with a note saying he had made the requested changes. 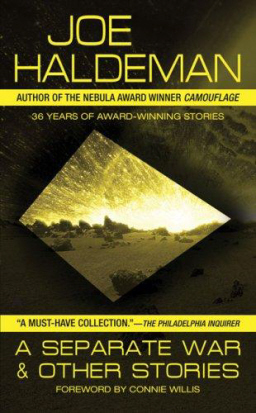 “Changing Woman,” by W. Macfarlane, is probably the best story in the issue (not counting the Dying Inside part). It’s about an American Indian woman, an expert draftsman who works for a mapping survey, who gets hired by a rich woman in California to make a very large and very accurate map of the country. Then earthquakes start happening …

Ernest Taves is another writer with an odd short career. He was a contemporary of Macfarlane’s (born 1916, died 2003), and he published only a dozen stories in the field, all between 1969 and 1976, all in Galaxy (except for one in If). So, perhaps a one-editor writer, that editor being Jakobsson? “True School of Modesty,” is one of a series of six stories about an alternate history of Lunar exploration (or anyway it seems alternate now).

It’s about an expedition that finds an odd magnetic anomaly – alien spacecraft or just a meteorite? – and has a hard time getting permission to investigate. More important, probably, is an attempt to also investigate the remains of a Russian-American expedition that failed previously, stranding the astronauts. I’m sure that story was an earlier one in the series and this story might have had a bit more resonance had I read the earlier one.

Robert F. Young’s “The Years” is a very short time travel story with a very simple, predictable, and cliché plot, which I won’t detail here. Young at close to his worst, I’d say. 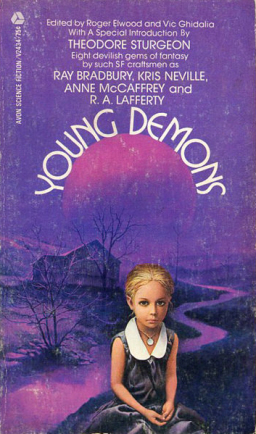 Larry Eisenberg was one of those minor writers you’d see fairly consistently in the magazines back in the ’70s – many of his stories, including this one of course, were comic pieces about a somewhat unsuccessful scientist/inventor named Duckworth. Eisenberg himself was a scientist working at Rockefeller University. He was born in 1919 and as far as I know is still alive. His writing career extended from 1962 to 1988, though he was mostly done by about 1980.

“The Soul Music of Duckworth’s DIBS” is about an instrument that creates music based on a person’s body – music which turns out to illuminate a person’s deepest personal secrets. This turns out not to work quite as planned… Amusing minor stuff, what you would call worthwhile back of the book material.

Finally, Kris Neville’s “Medical Practices Among the Immortals” is another “worthwhile back of the book” sort of story, a sly look at the problems of doctors in a future of extended life spans and concomitantly little need for doctors – with a side theme about immortality not being all it’s cracked up to be.

All in all, this is a pretty decent magazine issue, with part of a major novel, an early (and, yes, rather weak) story by another major writer, one quite fine short story in the Macfarlane, and a couple further nice little pieces. One can’t pass judgement on Jakobsson’s tenure based on one issue – I will note one thing, that with the exceptions of Haldeman and Taves, the authors featured here are all veterans, and even Taves was rather old for a “newish” writer.

Rich Horton’s last retro-review for us was the December 1956 issue of Satellite. See all of Rich’s retro-reviews here.

I’m fascinated by writers like Macfarlane and Taves (not that I’ve read them yet), that have brief interludes of publication and then largely silence. I’ve seen similar examples of authors in early issues of Galaxy. As a writer myself, I just can’t imagine reaching a point where I’m getting sales into places like Galaxy (even consistently in some of their cases) and then just stop. Or maybe I’m making assumptions. Perhaps these writers never stopped writing, but they couldn’t make any more sales.

Sometimes I think it’s explained by the “one editor” phenomenon — a writer may simply only be in synch with the tastes of one editor. Sometimes I think writers lose interest — Robert Rohrer began publishing as a teen, published several stories in places like F&SF and Fantastic, then simply stopped. I recall somebody tracked him down — he was a successful professional in some field — and he said words to the effect that he just grew up. (I could have that wrong — but anyway he lost interest

There was a writer named M. C. Pease who sold about 20 stories to various markets between 1949 and 1957, then disappeared. (Some were quite interesting.) As I recall, Gordon Van Gelder said that for many years — decades — after that F&SF would still receive occasional submissions from him.

There are a fair number of writers whose total career outout is quite small. Instead of a profession or passion, writing just seems to be an occasional hobby with them. Someone like John Wall – “Sarban” – might be in this category. A couple of short novels and a handful of stories. Striking work, but it could all fit into one volume.

[…] Horton’s last retro-review for us was the September 1972 issue of Galaxy. See all of Rich’s retro-reviews […]