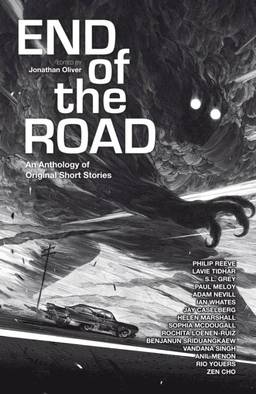 Back in March, we saluted Solaris and their rapidly expanding line of anthologies — a rare thing in today’s market — in a post titled “Is the Original SF and Fantasy Paperback Anthology Series Dead?”

In researching that article, I discovered Solaris had released a standalone anthology of original fantasy fiction in December: End of the Road. I ordered a copy, it arrived last week, and I’m very happy to say that I’m not disappointed.

Each step leads you closer to your destination, but who, or what, can you expect to meet along the way?

Here are stories of misfits, spectral hitch-hikers, nightmare travel tales and the rogues, freaks and monsters to be found on the road. The critically acclaimed editor of Magic, The End of The Line and House of Fear has brought together the contemporary masters and mistresses of the weird from around the globe in an anthology of travel tales like no other. Strap on your seatbelt, or shoulder your backpack, and wait for that next ride… into darkness.

Jonathan Oliver is the editor-in-chief of Solaris and Abaddon. He has two novels out with Abaddon Books, The Call of Kerberos and The Wrath of Kerberos, and three other anthologies: House of Fear, The End of the Line, and the World Fantasy award nominee Magic: An Anthology of the Esoteric and Arcane.

End of the Road was published by Solaris Books on December 15, 2013. It is 304 pages, priced at $7.99 in paperback and $6.99 for the digital edition. The moody and effective cover is by Nicolas Delort.

Great cover but I’m not very familiar with many of these authors or the editor.

Not disappointed say you? The description sounds vaguely like a horror or dark fantasy anthology without using the cliche-ridden associations of horror. Is that a fair description of the stories within?

That is a cool cover. I wonder who the artist is? I haven’t heard of these writers either but sometimes you gotta risk it to get the biscuit. I could use some weird tales.

> The description sounds vaguely like a horror or dark fantasy anthology without using the cliche-ridden associations of horror.
> Is that a fair description of the stories within?

I’m not very far into it (and have been skipping around, to be honest), but the theme appears to be horror on the road. Scary travel stories. Many of the writers are entirely new to me, which isn’t a bad thing.

It is a great cover, isn’t it? The artist is Nicolas Delort. I’ll add that to the description.

[…] and the played, this new anthology from Jonathan Oliver (Magic, End of The Road, House of Fear, The End of The Line, World War Cthulhu) brings together brand new stories from an international team of talented […]