So you’ve been given an impossible task by a king, primarily for the purpose of getting rid of you. What do you do first?

Well, to be honest, I would move to a new kingdom, but that’s why I’m not a Greek hero.

Jason, on the other hand, set out to assemble a team of the greatest heroes Greece had to offer. Not all of these are memorable: if you’ve heard of Phlias of Araethyrea, for example, you’re a bigger mythology geek than I am.

The name Heracles is probably familiar, however, and he shows up to fill the role of tank in the party. He brings along Hylas, an incredibly beautiful young man to, uh, carry his bow. Heracles apparently had a huge bow. With lots of arrows. That required a beautiful young man to follow him everywhere and share his sleeping bag.

Castor and Pollux come along as warriors as well, as did Meleager, of Calydonian Boar fame. Zetes and Calais may not be familiar names, but as the sons of the wind Boreas, they are able to fly and will come in handy for harpy fighting.

Jason brings along not one but two clerics, Idmon and Mopsus, who will be able to read auguries and divine the gods’ wishes. This is where we learn that Apollonius, the Argonautica’s author, didn’t believe in spoiler alerts: he had to include two seers because one of them, Mopsus, will die in Libya.

Orpheus joins the crew to serve as bard. His skills will prove useful not only to keep time for the rowers on board ship (no trivial thing when you’re planning to sail/row from Greece to the shores of the Black Sea), but also when the magic abilities of his music help to resolve arguments among the mighty egos of the assembled men. 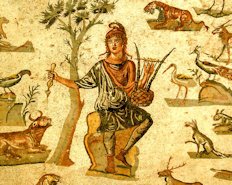 Finally, the Argo itself is a character in the work. The main beam in her prow was taken from one of the oaks sacred to the god Zeus and was able to speak.

Notably, Apollonius tells us who wasn’t invited. Atalanta, the famed huntress and wrestler, is sometimes included among the Argonauts. Here, however, Jason had vetoed her inclusion on the grounds that having a woman on ship would only cause fighting amongst the male members of the crew.

The manner in which Apollonius assembles the crew of the Argo serves several purposes. For one, it lets him show off. The Argonautica is an Alexandrian work, and while we will talk more about what that means in a few weeks, for now I’ll just say that a highlight of this style of work was a desire to display a great deal of literary knowledge.

But in choosing which crew members to include, Apollonius must also perform a task well known to authors and DMs everywhere. He has to pull together a cast that can manage any challenge the adventure will throw at them without making it so easy that it is uninteresting.

The character of Heracles, for example, poses a real difficulty. He’s not the only son of a god on the journey, but he’s by far the most famous and the most powerful. He outclasses all the other members of the party. But myth dictates that he was on the Argo. Apollonius resolves the situation by having Hylas, Heracles’s companion, kidnapped by a nymph. Heracles must choose between searching for Hylas and continuing with the Argo, and he elects the former.

How the remaining Argonauts function together as a team is, of course, one of the driving forces of the remainder of the epic.

Next time: Jason and the Argonauts and the Island of “Oh my God, you aren’t even pretending this isn’t all one protracted male wish fulfillment fantasy.”

Your caption to that first image caused me to make a spectacle of myself at Starbucks. I love your posts.

Interesting post.
But you could have handled the Heracles/ Hylas paragraph better by not beating around the bush about their relationship.

Possibly, but A) Apollonius does too, and there are a lot of issues there and B) it didn’t seem like the time to dig into the nuances of Greek pedophilia. We will get there, but I chose not to at this time.