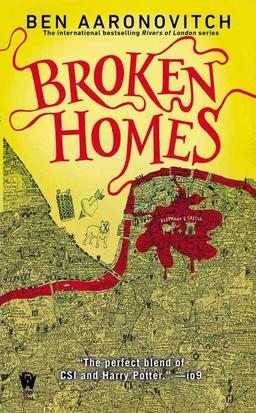 Ben Aaronovitch’s Rivers of London novels are one of my favorite new series. io9 calls them “The perfect blend of CSI and Harry Potter.” I’ve never watched CSI, but I imagine that can’t be that far off. I think Diana Gabaldon is very close when she describes them as “What would happen if Harry Potter grew up and joined the Fuzz.”

Even those quotes don’t do justice to how funny these novels are. They’re tightly plotted, too; just the right mix of humor, suspense, and genuine character development. The latest in the series, Broken Homes, just landed this month. Do yourself a favor and check it out.

My name is Peter Grant, and I am a keeper of the secret flame — whatever that is.

Truth be told, there’s a lot I still don’t know. My superior Nightingale, previously the last of England’s wizardly governmental force, is trying to teach me proper schooling for a magician’s apprentice. But even he doesn’t have all the answers. Mostly I’m just a constable sworn to enforce the Queen’s Peace, with the occasional help from some unusual friends and a well-placed fire blast. With the new year, I have three main objectives, a) pass the detective exam so I can officially become a DC, b) work out what the hell my relationship with Lesley Mai, an old friend from the force and now fellow apprentice, is supposed to be, and most importantly, c) get through the year without destroying a major landmark.

A mutilated body in Crawley means another murderer is on the loose. The prime suspect is one Robert Weil, who may either be a common serial killer or an associate of the twisted magician known as the Faceless Man — a man whose previous encounters I’ve barely survived.

I’ve also got a case about a town planner going under a tube train and another about a stolen grimoire. But then I get word of something very odd happening in Elephant and Castle, on a housing estate designed by a nutter, built by charlatans, and inhabited by the truly desperate. If there’s a connection to the Crawley case, I’ll be entering some tricky waters of juristiction with the local river spirits. We have a prickly history, to say the least.

Just the typical day for a magician constable.

This is the fourth novel in the series, and the first to be published by DAW. We covered the first two, Midnight Riot and Moon Over Soho, back in March 2011. The third, Whispers Underground, was published in July 2012 (see the British editions of all four books here).

Ben Aaronovitch is also the author of two highly regarded Doctor Who episodes, “Remembrance of the Daleks” and “Battlefield.”

Broken Homes was published February 4 by DAW Books. It is 326 pages, priced at $7.99 for both the paperback and print edition.

I can also recommend the audiobook versions of the Aaronovitch series. The narrator does a truly amazing job with the books.