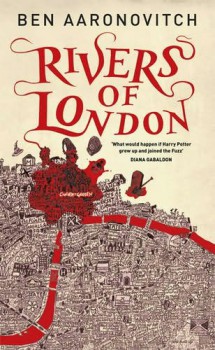 One of the great things about Amazon.com is that there are so many ways to browse. Which is rather ironic, considering that 10 years ago that’s the precise reason I confidently gave for why online booksellers would never replace local bookshops: you couldn’t browse.

Yeah, well. I was wrong.  You can browse.  And how. Last week I stumbled across a few hard-to-find British hardcovers in the Science Fiction & Fantasy section of their Bargain Department, and on a hunch I did a search for all titles from Gollancz, the prolific UK SF & fantasy publisher. I sorted by price and bam, I had a handy list of great bargain Gollancz books.

One that grabbed my attention immediately was Ben Aaronovitch’s Rivers of London, in hardcover for just $14.56:

My name is Peter Grant and until January I was just probationary constable in that mighty army for justice known to all right-thinking people as the Metropolitan Police Service (as the Filth to everybody else). My only concerns in life were how to avoid a transfer to the Case Progression Unit – we do paperwork so real coppers don’t have to – and finding a way to climb into the panties of the outrageously perky WPC Leslie May. Then one night, in pursuance of a murder inquiry, I tried to take a witness statement from someone who was dead but disturbingly voluable, and that brought me to the attention of Inspector Nightingale, the last wizard in England. 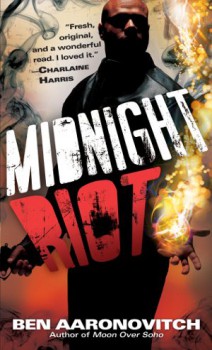 Now I’m a Detective Constable and a trainee wizard, the first apprentice in fifty years, and my world has become somewhat more complicated: nests of vampires in Purley, negotiating a truce between the warring god and goddess of the Thames, and digging up graves in Covent Garden . . . and there’s something festering at the heart of the city I love, a malicious vengeful spirit that takes ordinary Londoners and twists them into grotesque mannequins to act out its drama of violence and despair. The spirit of riot and rebellion has awakened in the city, and it’s falling to me to bring order out of chaos – or die trying.

Diana Gabaldon describes Rivers of London as “What would happen if Harry Potter grew up and joined the Fuzz,” which so far is accurate, though it doesn’t nearly reflect how very funny this book is.

Rivers of London is being released in paperback in the US as Midnight Riot, nearly simultaneously with its sequel Moon Over Soho, both from Del Rey.  Check ’em out.

Kind of a leap in title names from Rivers of London to Midnight Riot but the story sounds cool either way.

I thought the same thing. Which cover do you prefer?

Ben Aaronovitch wrote what I consider to be two of the better episodes of Sylvester McCoy’s tenure as the Doctor (‘Doctor Who’ – “Rememberance of the Daleks” & “Battlefield”.)

I might need to give this a read, sometime.

Ha! You not only made me badly want to read the book (first cover, please), but to watch “Hot Fuzz” again and laugh my butt off. Why are all my DVDs in storage???

That’s right! I forgot to mention it. Popular Dr. Who author here, everyone. I need to watch more Dr. Who.

Me too! There’s nothing wrong with the Del Rey cover, but the art on the Gollancz edition drew my eyes immediately.

And all your DVDs are in storage because you’ve embraced the Bohemian lifestyle. Or was that a rhetorical question? I can never tell.

I like when people answer my rhetorical questions. That means I don’t have to. Viva la vie Boheme. I guess.

John O’ — Midnight Riot cover is strong, and prefer it to the one for Rivers of London. Rivers seems a little too 1960’s for me.

However, the leap the editors took from one title to the other seems a big one, at least at first glance. Rivers might tie to the story better if that’s a recurring setting or something. Not saying Midnight Riot isn’t a good title — it is — just how relationship between the two versions of the same book isn’t there.

Well put. For me, the cover to RIVERS OF LONDON speaks of a comedy. Or a least, a book with a lot of humor.

The new title MIDNIGHT RIOT, especially when coupled with the new cover, papers over the humor. Which is a shame, because my reading in the book so far has caused me to laugh out loud a few times.

I’m about 140 ages into this and while there is a lot to like, esp. the humour, it does seem to be a rather loosely written, sprawling novel. One thing I’ve noticed that a lot of the time, the sentence structure is a mess – is this a function of the story being told 1st person by Peter Grant? Whatever the reason, I’ve had to stop a number of times to re-read a sentence which at first glance made no sense.

Thanks Harry! You got further than I this week… I had to put the book down and get back to work! *sigh*

[…] is the fourth novel in the series, and the first to be published by DAW. We covered the first two, Midnight Riot and Moon Over Soho, back in March, 2011. The third, Whispers Underground, was […]

[…] a big fan of this series. We covered the first novel, Rivers of London (published as Midnight Riot in the US), which Diana Gabaldon […]