After a month off, I’m ready to start reviewing self-published books again. I haven’t received many new books recently, so if you have a book you’d like me to review, please follow the submission guidelines here. The fewer submissions I receive, the better your chances of getting a review. Meanwhile, this month’s book is Sorcerer Rising by E. Nathan Sisk. A submission which I received in December, not coincidentally. 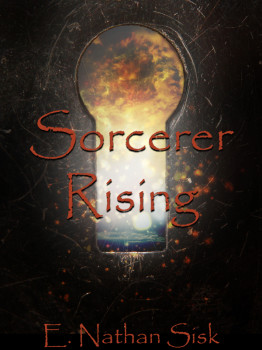 The titular sorcerer in Sorcerer Rising is one Virgil McDane. The word “sorcerer” can mean different things in different books. In some books, sorcerer, wizard, witch, and magician are all terms for the same thing. And in others, they’re very different. In Virgil’s world, a world a lot like ours, except that magic is real and public (and as a result technology is different but recognizable), the real difference is that wizards are part of the Guild, trained in its magic and responsible for following its rules, and sorcerers are self-taught. (I’m still not sure what the deal is with witches, just that Virgil considers them scarier than wizards.) Virgil is a sorcerer, but he used to be a wizard. When he was kicked out of the Guild for an act of desperation, he was Branded, and everything the guild taught him was taken away. He had to relearn magic on his own, and thus he is a Sorcerer, working outside the Guild, scraping together a living doing jobs that wizards won’t do.

At the beginning of Sorcerer Rising, that job is smuggling. Across the world are scattered clouds, mists of pure Aether, and in each cloud is a world. How the world is formed is not fully explained, but it seems that raw Aether can be influenced by the human mind and the first people to visit a world do a lot to shape what it becomes. The Guild controls access to most of these clouds, as they have the knowledge and magic to safely enter and return. They can also Inhale things in these clouds, storing them in their minds, later Exhaling them into the world. Most of the Guild’s wealth comes from trade with these clouds, retrieving rare and valuable materials and bringing them back to the mundane world.

The mundane world is different than ours, though not as much as in many fantasy or science fiction stories. It makes a difference that magic is openly acknowledged by the public. This means that in some ways, magic is like a technology, with understandable rules and predictable results. The level of actual technology is similar to the modern world, though perhaps closer to the 1950s than the 2010s. There are no cell phones or computers, but there are automobiles and planes—including jets, though those are new. There are also surprisingly futuristic items, such as laser guns and human-like robots. A lot of these technologies depend on trade through the clouds, which provide the raw materials to do things that can’t be done with earthly technology. Even when the technology is similar, it can work differently—automobiles run on Everburn rather than gasoline, for example. This makes for an interesting world, where there are continual surprises from things working differently than expected. Fortunately, this was more often background and color than as a way to get characters out of a situation they couldn’t handle themselves.

Though Virgil’s abilities are much diminished, he can still accomplish the simple Inhaling and Exhaling, so he makes a great smuggler. Unfortunately, when a deal goes bad, he finds himself short on cash and options, which is when one Mr Aberland, a wealthy magnate, hires Virgil to do the impossible: to chase the Rainbow. The Arcus—the Rainbow—is a beam of energy that lands seemingly at random, bringing magic and chaos with it. And now it’s fallen into Virgil’s backyard, and Mr. Aberland is paying him to take part in an expedition to determine what it is, and to find its source—the other end of the Rainbow. Accompanying him will be highly armed guards, scholars, a robot, and a couple of wizards.

Sorcerer Rising falls firmly into the fantasy noir tradition, most akin to the Harry Dresden books. It has the cynical first person narrator, down-on-his-luck and regarded with suspicion by his peers, trying to make his way in the world, while retaining a modicum of self-respect (and usually failing). However, Virgil is not a Harry Dresden knock-off. For one, while Harry’s a powerhouse, even when he’s overmatched, with a host of skills and a ton of power, Virgil’s something of a magical weakling. The Brand has taken away his knowledge and the incident which led to it has taken away most of his power. He gets by on a host of tricks, including a magical shotgun named Abigail. The lack of knowledge and power forces Virgil to rely more on his wits and on his familiar, Algernon, a separate part of his own mind with a knack for processing information unhindered by the filter of a superego.

A lot of the conflict early in the novel comes from the friction between Virgil and the wizard Conrad Dorne, also part of the expedition. He knows Virgil’s past and he’s not happy to have to work with him. Dr. Lambros, the expedition lead, does not exactly want Virgil on her team either, but she’s been overruled by Mr. Aberland. About the only people who like Virgil are the head of security, James; the other wizard, Tiffany Norwood; and the doctor, Sam Green. Virgil’s first task is to prove himself to the rest of the expedition. Only then can he start to solve the mystery of the Arcus.

Aside from Virgil, the other characters were interesting, though not necessarily long-lived. Mr. Sisk is not exactly shy about killing off his characters, even ones whom you expect to make it. That said, it didn’t feel arbitrary and meaningless, which seems to be what some authors strive for. Death is death, but even random, unfair death can serve more of a purpose than to get rid of extraneous characters and I thought the author handled the death of his characters well.

Overall, I found Virgil’s cynical account of his adventures entertaining. The character is likable, if not entirely good—but his rough edges are part of what make him so endearing. This book is more internal than most books of this genre—a large proportion of the adventure is spent in the devastated landscape of Virgil’s mind. Virgil’s attempts to overcome his own guilt and doubt, and reclaim that which had been stolen from him, would be a strong story in its own right. Unfortunately, the book ends with a large dollop of deus ex machina, addressing both the internal and external conflict in a less than satisfactory way. Also, while I try not to dwell on typos and such, especially in self-published books, there were enough in this book that I felt they were distracting, and thus worth a mention. I found the frequent misspelling of “quiet” as “quite” particularly bothersome. Despite these caveats, it was a fun ride, and I’m eager to see what happens next.

Sorcerer Rising is available on Amazon for the Kindle for $3.99, and at Barnes and Noble for the Nook for $3.99.