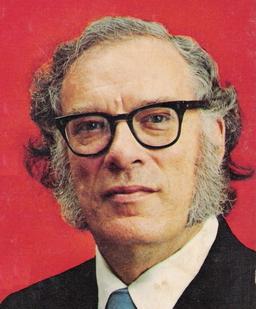 Several sites around the Internet are making a big deal of Isaac Asimov’s predictions for 2014, originally written as an Op Ed piece for The New York Times fifty years ago.

Inspired by his visit to the New York World’s Fair of 1964, Asimov’s original piece wasn’t a science fiction story, but simply his predictions for what the World’s Fair of 2014 would be like.

Alexis Kleinman’s article at The Huffington Post is titled “Isaac Asimov’s Predictions For 2014 From 50 Years Ago Are Eerily Accurate,” and carefully categorizes the Good Doctor’s predictions as Correct (“Robots will neither be common nor very good in 2014, but they will be in existence”), Close, But Not Exact (“World population will be 6,500,000,000”), and Incorrect (“The appliances of 2014 will have no electric cords”).

Dylan Love at Business Insider takes a similar angle, with his post “In 1964, The Brilliant Isaac Asimov Wrote Some Predictions For 2014 — Wait Until You See How Right He Was.” Love grades Asimov much higher than HuffPo, noting that several predictions (“Men will continue to withdraw from nature in order to create an environment that will suit them better,” which clearly forecasts World of Warcraft, and “Much effort will be put into the designing of vehicles with ‘robot-brains,'” an obvious reference to Google’s self-driving cars) just need the right interpretation to be true.

Rebecca J. Rosen at The Atlantic takes Asimov to task for predicting an insufficiently grim future (“But he couldn’t have known the consequences of the development he predicted —- a planet whose climate is badly destabilized, whose inhabitants face mass extinctions in the years ahead”), and David Wogan at Scientific American clearly enjoyed the article, though he points out Asimov entirely missed the boat in at least one regard (“What we know as the internet is missing in these predictions, which is how we are all able to read this article and his thoughts decades later.”)

Good to see Asimov getting so much attention two decades after his death. You can read his original article here.

Space travel, too (although I guess that’s a subset of transportation). Everyone expected computers to fill a room in 2013… and they thought we’d be using them on Venus.