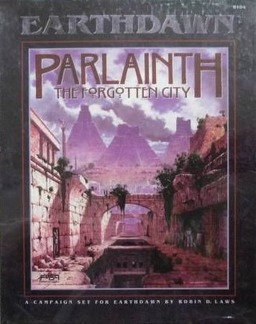 Many years ago, when I was unemployed and trying to get a new website off the ground, I made a lot of calls to publishers large and small. I’d introduce myself, talk fast about how many readers there were on the web, and try and sound a lot bigger than I was.

Didn’t usually work. This was the mid-90s, and there were lots of publishers who didn’t even have a website. But occasionally one would take a chance, and agree to send me some sweet review copies.

One such publisher was FASA, one of the leading RPG game makers of the day. I’ll always remember opening the first box they sent me, and gaping in surprise at the contents: every single Battletech supplement in print — nearly 1,000 bucks worth of premiere product. A treasure trove far beyond my expectations.

And a textbook bittersweet moment, because what I was really hoping for was material for Earthdawn.

Earthdawn was a fantasy role-playing game designed by Greg Gorden and first released by FASA in 1993. Over the next few years they produced 20+ supplements, all with gorgeous cover art by folks like Janet Aulisio, Brom, Les Edwards, and many others. Set on the same world as Shadowrun, but thousands of years earlier, the key theaters were where the nations of Russia and Ukraine exist today, in the gorgeously detailed land of Barsaive.

If you’d been raised, as I had, on games with very slim background — or ones where the setting was bolted on afterwards, like AD&D and Traveller — then Earthdawn was a revelation, a game deeply tied to a time and place with strong mythic roots, and a detailed and logical world. It had an instant appeal to me and many other old-school gamers, who were taken in by the ambitious design and brilliant packaging. 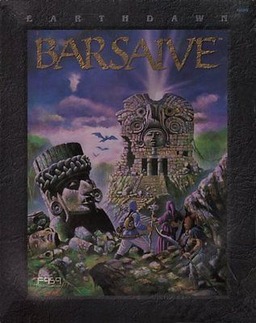 I wrote a lengthy two-part survey of the Battletech Universe (still up at my old website SF Site, here and here), earning a warm call of thanks from the product manager at FASA — and an offer to get me whatever else I wanted.

Tragically, it was too late to request Earthdawn loot. FASA stopped producing supplements for the game by the late 90s.

As I discovered as a sat down to research this article, eventually it was licensed to Living Room Games, who produced roughly a dozen releases for a Second Edition, and then to RedBrick LLC in 2003, who re-packaged a Classic Edition in 2005, and a Third Edition in 2009.

Today the license is held by the resurrected FASA Corporation, who have so far produced a Revised Edition, a newly-edited release of the out-of-print Third Edition (how did the third edition go out of print? I didn’t even know there was a second edition!)

Anyway. I was left to my own devices to track down the early Earthdawn releases from FASA, including two significant treasures: the boxed set detailing the province of Barsaive, and the nearly-legendary boxed set Parlainth: The Forgotten City, containing a complete campaign written by a young Robin D. Laws.

If the name Robin D. Laws sounds familiar, it should. He’s authored some of the most acclaimed role playing products of the last decade, including several that we’ve loudly trumpeted here at Black Gate — such as Ashen Stars, HeroQuest, Hillfolk, and The Dying Earth.

It took a while to track down a copy of Parlainth, but it was worth the effort. Detailing an ancient capital that literally vanished from the face of the planet for centuries until the spell that banished it was lifted, the ruins of Parlainth contain the kinds of secrets and treasures that will entice players for months.

Here’s the description from the back of the box: 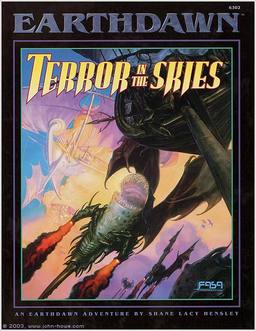 The ruins of Parlainth beckon the bold explorer, promising profit and peril. For centuries, this fabled Theran city lay hidden in astral space, all knowledge of it erased by a powerful spell until a thief and his apprentice found the lost magic that would bring Parlainth home. Now this ancient seat of Theran power has returned to the land of Barsaive, its people slain and its buildings and streets ravaged by Horrors. Vast sections of it remain unexplored, concealing glittering treasures and objects of unknown power behind crumbling walls and in dank catacombs. Only the boldest adventurers dare explore mysterious Parlainth, risking its dangers in search of wealth. Only those with the courage to challenge the fearsome Horrors lurking in its ruins can claim the name of hero.

* A 144-page volume that provides a wealth of detail about the Forgotten City and the explorers’ outpost of Haven, options for exploring the ruins, and a guide to creating and running adventures in Parlainth.

* Fragments of first-hand information about the mysterious ruins, in the form of documents written or discovered by previous explorers.

* A full-color map of the ruins of the Forgotten City.

Parlainth was supported with one additional supplement, Parlainth Adventures. You can buy both the original boxed set, and other Earthdawn materials, in downloadable PDF format from DriveThruRPG.

Whether or not you use Earthdawn, Parlainth and its other supplements are still very usable today with other game systems. They are well worth your time.

Parlainth: The Forgotten City was written by Robin D. Laws, Shane Lacy Hensley, and John Terra. It was published by FASA in 1994.

I remember seeing Earthdawn stuff in gaming shops back in the day, but never quite got around to picking any of them up. I had _no idea_ that it was connected to Shadowrun. The things we learn …

I was fascinated by the Shadowrun connection too. I’m not sure what the details are, but it makes a certain amount of sense. Both games were published by FASA at the same time, so if you were going to travel back in time in Shadowrun, it made sense to land in Earthdawn. 🙂

The terrible flaw of Earthdawn was that Shadowrun had already gone to a very nice 2nd Edition mechanic when Earthdawn came out, and since they linked the universes [Earthdawn being a pre-history of the Earth when magic was alive as it comes and goes in cycles] why not utilize the friendly mechanic from Shadowrun and get the spill over fans? Instead Earthdawn created a completely new cumbersome mechanic that didn’t allow for crossover at all [imagine having the ability to ‘warp’ you Street Samurai right into a Horror cave in Earthdawn and have a fight!]. To me, that was the biggest mistake FASA ever made in their RPG lines.

I never played Shadowrun, so I was never aware of the divergent nature of the two rule systems. And you’re right, that sounds like a fatal flaw. 🙁

I always found the Shadowun universe (and its accompanying fiction) to be fascinating, though. The premise — that magic returned, as it did previously did in the time of Earthdawn — to be very compelling. Similar in some ways to the dimensional sundering of the world in West End’s TORG game (which also fascinated me, but which sadly seems to have been forgotten).

That’s right — Torg. Another one I remember seeing but never picked up back at the start of the full-color-internal-artwork renaissance.

[…] classic The Temple of Elemental Evil; to the home of King Kong, Monster Island; to the ruins of Parlainth, an ancient capital that vanished from the face of the Earth; to Call of Cthulhu scenarios based on […]

[…] I’m working with an approach like the Parlainth box set from my beloved Earthdawn game (A Black Gate post on Earthdawn), where each section of the city has certain characteristics, but aren’t mapped in detail (unlike […]