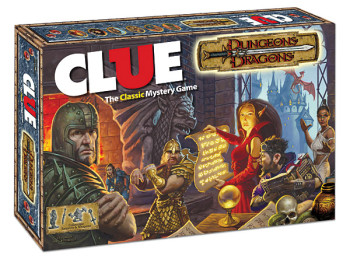 Since geek culture has pretty much overtaken popular culture these days, any visit to the local shopping mall comes inundated with looming dragons, flashing robots and space vehicles, menacing creatures from myth and legend, superheroes of every stripe, and a certain familiar blue police callbox. Now that I have kids of my own, Christmas shopping is really interesting…

Okay, I’ll confess: my gift purchases sometimes tend to be of the “Oh man when I was that age I would’ve loved this!” variety. My wife chides me about how my daughter’s tastes are starting to slant away from superheroes and monsters and toward Barbie and Polly Pocket.

I have a son, too, but he’s still just two, so some of the coolest toys just aren’t age appropriate for him yet. My daughter, on the other hand… 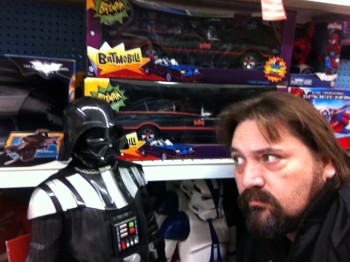 So, yeah, there are some Barbies and such under the tree this year, but also some of the Marvel Universe 12” Titans figures. Oh man I woul’dve loved those as a kid.

I’m already brushing up on my Hulk and Spider-Man voices (my daughter’s constant refrain when we play is “Make him talk! Make him talk!”).

On action figures: if you are just slightly older than me, you probably grew up with the larger variety, starting with the original 12” G.I. Joes and the 8” Megos. By the time action figures invaded my little world, they were the 4” Star Wars and G.I. Joes. Now they come in just about every conceivable scale, from little 2” Imaginext and Fisher Price figures up to the Titan series — and beyond.

Action Figures From a Giant’s Toybox 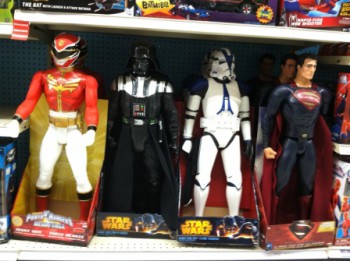 There are 31” figures (see image) that include Batman, Superman, Darth Vader, a Clone Trooper, and a Mighty Morphin Power Ranger. These are figures that are literally as tall as some of the children for whom they will be purchased. Imagine: an action figure as big as you are! The play opportunities, actually, seem quite limited by the size factor. When you’re playing with the smaller variety, your bathtub can be the Degobah swamp, and the couch cushions can stand in for an entire Joe/Cobra battlefield.

I’m guessing that most relatives of a budding Marvel fan are only going to know that little Jacky wants a Thor or a Spider-Man, and will grab whatever figure is nearest at hand (or on sale at the moment) from the dizzying array of toy lines, with the result being that Jack’s figure collection will span a range of scales: his 4” Spider-Man and 6” Hulk will be teaming up with a 12” Iron Man and, well, he’ll just have to exercise a little more of his imagination and posit a shrink ray, or just suspend disbelief a bit when it comes to matters of scale.

Speaking of using one’s imagination, this new line of Marvel Titans figures, cool as they may be, are lacking in one key component for any superhero play: super villains. I guess you can have them fight the 6” figures, but that’s a bit of an unfair size advantage. 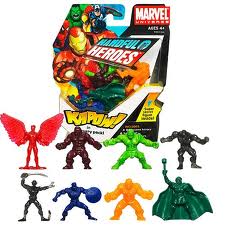 Another thing that suddenly dawned on me while meandering zombie-like down an aisle at Toys ‘R Us ‘round midnight (open 24 hours through Christmas Eve!) is that there is not a single female superhero in the Titans line (perhaps I’m more cognizant of this since I’m buying them for a girl). Granted, there have only been about six characters released in this set, but check this out: there’s also a line called “Handful of Heroes,” mini-plastic figures on about a 1” scale, that have 120 total figures (“Collect Them All”!). I scoured the checklist: not a single female character out of 120. Some are duplicates with different coloring, so there are probably about 40 distinct molds. Not a single woman? When you go forty deep into the Marvel top-tier line-up of characters, you do net some familiar females, so not to include even one seems like it must be a conscious decision. Or just a really bewildering oversight.

Onto slightly older toy fare, games that I can’t wait until my children are old enough to play… 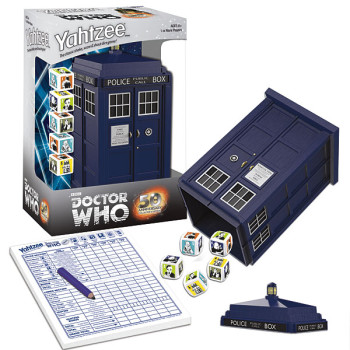 Barnes & Noble has been particularly infiltrated by geekdom. Desktop TARDIS (my wife got me that one for my birthday), plush talking Dalek (my daughter let slip that’s what my wife got me for Christmas), build-your-own R2D2; the list goes on. Perhaps the biggest indicator of this infusion of science fiction and fantasy into the world of the mundane are the hybrids: the Dungeons & Dragons version of Clue, for instance. Or the Doctor Who Yathzee.

As far as I can tell from perusing the boxes, these are still the games remembered by several generations, only with an overlay of the licensed franchise. So the Yahtzee dice box is shaped like the TARDIS (I wonder if there’s a new rule that allows one to travel back in time to re-roll a bad roll). The D&D Clue substitutes Colonel Mustard in the Billiard Room with a pistol for the possibility of Redgar the Fighter in the Wizard’s Tower with a Ring of Magic Missile. Hilarious. I do want it. It would be a hoot to play with D&D-savvy friends who would also enjoy a nostalgic round of Clue. 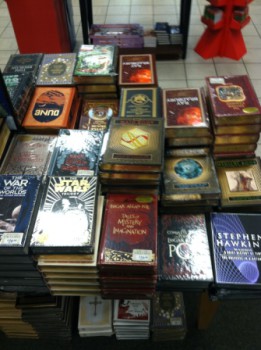 Since we’re in Barnes & Noble Bookstore, let’s take a moment to talk about the books. Check out the table piled high with their CLASSICS line, hardcovers nicely bound in fake leather: nearly half of the titles are now classics of fantasy and science fiction, from Bradbury and Asimov to the collected novelizations of the Star Wars trilogy(!). Honestly, never thought I’d see that sitting next to Shakespeare. But it is nice to see the likes of Lovecraft and Dick get their due.

Incidentally, there was one other thing I noted in this latest visit to B&N, which will be of interest to spec-fic readers. The final installment in Margaret Atwood’s Maddaddam trilogy is described on the inner sleeve as “speculative fiction.” Apparently the publishing industry has finally come to terms with and accepted that appellation. When that series began with Oryx and Crake in 2003, it was published simply as a novel, and Atwood herself resisted any genre implications of what was clearly a dystopian work of science fiction. I can understand the animosity toward the constraints and stereotypes of genre labeling, but here we can finally call a spade a spade.

Well, the Ravaging Loot and Pillage on my resources that is known as Christmas Shopping draws to a close for another year. Now it is time to hunker down around the hearth-fires and exchange these strange gifts (that are getting stranger every year).

And perhaps, after playing Barbie Meets the Avengers with my daughter and Thomas the Train with my son, I will fall asleep beside them curled up under the tree, clutching my plush Dalek (and being roused, when I press him too hard, by the jolly sound of “Ex-term-in-ate!” in my ear).

Christmastime is here / Hobbits, dwarves, and beer / Fun for all / That parents call / The chaotic time of year / Dragons in their lair / Dungeons everywhere / Olden times / and dwarven rhymes/ Of gold and arms to bear