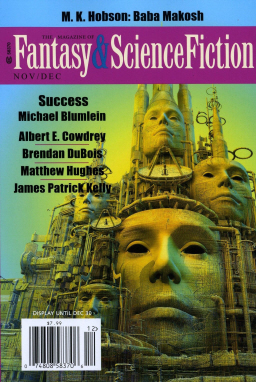 I wish I had time to really keep up with F&SF. As it is, I barely have time to run out to the bookstore every two months to pick up a copy.

Nonetheless, I’m proud to be able to support the magazine. Ever since it switched to a bimonthly format in April 2009, six double issues a year, the huge 256-page issues have felt more like anthologies than a magazine. Editor Gordon van Gelder maintains a nice mix of SF and fantasy — including the occasional sword & sorcery piece — the only major magazine to dare to blend genres.

“Baba Makosh” by M. K. Hobson is my favorite story of this issue. Three Comrades, fighting for the Red Army in the Russian civil war, are sent as a squad to seek Hell… Baba Makosh leads them to a village and a great building made of twisted roots, inside which they meet her sons, who look like stags but walk like men, and her husband — whom only Pudovkin sees is the horned god Veles. His companions are too busy gorging on cheese to notice. Pudovkin begins to question the post-revolutionary principles of the Red Army — principles he has supported until now — as Veles and Baba Makosh show through their words and actions that the traditions his grandfather loved, cruel though they may seem, have a strength and a rationale for existence that cannot be controlled nor defeated.

This piece offers beautiful, lush writing, a unique plot, strong characters, and folklore intertwined with history so skillfully that the whole takes on a magical quality that transports the reader completely to this new reality. The story is worth dissecting and even more worth reading as a whole — it’s rich in theme, with every word and line placed with purpose.

The issue also includes a novella by Michael Blumlein and novelettes and stories by Matthew Hughes, James Patrick Kelly, Albert E. Cowdrey, Tim Sullivan, and others. Here’s the complete Table of Contents.

The Magazine of Fantasy and Science Fiction is edited by Gordon van Gelder. The cover price is $7.99 for a thick 258 pages. This issue’s cover is by Modolithic Studios. Check out the complete TOC and additional free content at the F&SF website.

We last covered F&SF here with the September/October issue.