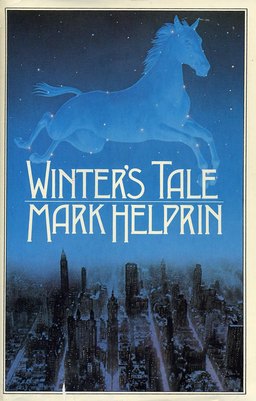 Mark Helprin’s 1983 novel Winter’s Tale was perhaps the prototype for modern urban fantasy. No, it didn’t have vampires or werewolves, but it was a star-crossed love story set in a mythic New York City, with a great villain — and a magical horse.

Mark Helprin isn’t really known as a fantasy writer; he’s chiefly known for his literary novels A Soldier of the Great War, Memoir From Antproof Case, and others. His three books for children — Swan Lake, A City in Winter, and The Veil of Snows — are certainly magical, and not just due to Chris Van Allsburg’s superb illustrations, but Winter’s Tale is his only adult work that crossed over into genre territory.

But Winter’s Tale was joyfully embraced by fantasy fans, and not simply because the main character is a thief. It is a epic tale of love, loss, and the mysteries of death.

The story opens in an imaginary 19th Century Manhattan, an industrial Edwardian-era metropolis that shares some characteristics with the city we know. It centers on Peter Lake, the son of two immigrants denied admission at Ellis Island.

Desperate, Peter’s parents set him adrift in a tiny ship in New York Harbor, where he is eventually found among the reeds and adopted by the rough-and-tumble Baymen of the Bayonne Marsh. Peter grows up to be a mechanic — and a skilled cat burglar. He who stakes out a fortresslike mansion in the Upper West Side and, when he’s certain it’s unoccupied, he breaks in.

But the home isn’t empty. Inside is Beverly  Penn, a shut-in heiress dying of consumption, and the most beautiful woman Peter has ever seen. What begins as a robbery becomes a love story — and a driving quest that spans nearly a century.

Winter’s Tale was adapted for the screen by Akiva Goldsman, who is also directing. It stars Colin Farrell, Jessica Brown Findlay, Russell Crowe, and Jennifer Connelly, and is scheduled for release on Valentine’s Day of next year. Warner Bros. has released the first trailer for the film, and it’s shaping up to be one of the most promising big-budget fantasies of 2014. Check it out below.

I am so excited to read this, John, and learn this film is coming. Winter’s Tale was a revelation to me when the book first came out. I was moved by this story in ways I hadn’t been touched by fiction before. I hope the film does it justice, but people should read the book too. An absolute heart rending classic.

Glad to see at least one fan of the book out there! I hope it’s not forgotten. Perhaps the movie will help a few more people discover it.