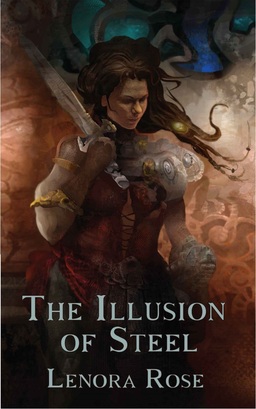 I was at Windycon 40 here in Chicago over the weekend, one of my favorite local conventions. As usual, I spent half my time in the excellent Dealers Room, wandering between Bob Garcia’s booth, the well stocked Dreamhaven Books table, and the splendid Starfarer’s Despatch booth — always packed with vintage paperbacks in terrific condition, and where I did most of my shopping.

But the big surprise this year was Raechel Henderson’s Eggplant Literary Productions. I’ve known Raechel for years, since she started the marvelous Spellbound magazine in 2001, and always admired her tenacity in the face of the dire forces of modern publishing. Raechel completed a successful Kickstarter back in July to fund a special Spellbound and Spindles issue of the magazine, and I dropped by her table to congratulate her and see what was new.

I knew she’d have a fine range of new titles, but I wasn’t prepared for the flourishing back catalog of fantasy novellas, novels, and surprises Raechel had produced in just the past few months. Eggplant is rapidly emerging as one of the most promising and productive new publishing houses in the industry, with brand new titles from Laura J. Underwood, Lori Ann White, Patricia Russo, Martin Clark, Lenora Rose, and many others. I’ll showcase several here in the next few weeks — starting with a fast-paced tale of shape-shifters, werewolves, and magic blades from new author Lenora Rose.

Not even a shape-shifter can hide from her past forever.

Abandoned by her mother as a child, never knowing her father, Kanna Mendrays understands how to hide. She has used her shapeshifting ability to mask who she is, what she is, even her gender. Now that she has come to Melidan Tower to heal, she finds her defenses crumbling.

Peace is scarce here. Biadei — the friend who saved her life and brought her to the Tower — goes mad at each full moon. The aged Lord Daemon — infamous for having killed the man who abused him — seems to know too much about her. Every room of the Tower presents Kanna with a mystery when all she wants is to be left alone.

And now she has begun to hear a voice: the spirit of Lord Daemon’s victim, whispering to her through a sword named Desecrator. When Biadei is captured by werewolves, it promises, “Give me Daemon, and I will save your friend. Give me Daemon, and you will know the truth about your family…”

The Illusion of Steel was published December 14, 2012 by Eggplant Literary Productions. It is 70 pages, priced at $4 in digital format. It is currently available from Amazon.com, Barnes & Noble, Kobo, and OmniLit. The gorgeous cover is by Alex Martínez. Read an excerpt at the Eggplant website.

[…] a great many readers and writers.  I ran into John O’Neil of Black Gate Magazine, who had nice things to say about Eggplant on his blog.  I hosted author Clifford Royal Johns’ book Walking Shadow at my booth.  Cliff is part of […]

[…] weeks ago I reported on the great work editor Raechel Henderson was doing with Eggplant Literary Productions. The […]