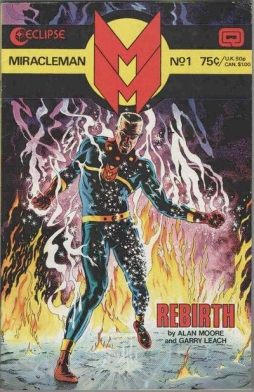 A little while ago, I put up a post here about Miracleman, or, as it was originally known, Marvelman.

One of the great ‘lost’ works of the comics medium, written first by Alan Moore and then by Neil Gaiman, for twenty years a confused copyright situation has kept old Miracleman material from being reprinted and kept publishers leery of the legal mess from taking a chance on publishing new material. This, even though Gaiman had plotted out a conclusion to the saga and one further issue had actually been fully drawn.

A bit more than a week ago, that all changed. Marvel Comics, who had been working with Gaiman to unriddle the complexities of the case, announced that in January of 2014, they’d begin reprinting Miracleman as a monthly comics series.

These issues will reprint all the material previously published in the United States as Miracleman and will also include new supplementary material, as well as some work previously only published in England. After the old issues are all reprinted, the series will continue with new work by Gaiman and artist Mark Buckingham.

This is big news. 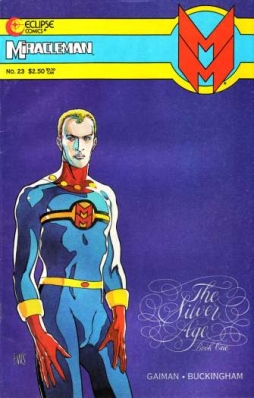 The background to Miracleman is a convoluted story. Here’s what I wrote last time:

Created in the mid-50s as a British knock-off of Captain Marvel (then the world’s most popular super-hero), the last story of Marvelman’s original run was published in 1963. In 1982, the character was revived for the British Warrior magazine by writer Alan Moore, with his backstory radically re-imagined. Warrior went under before long, but in 1985 Marvelman’s adventures continued, still written by Moore, now published by the American Eclipse comics. A few years later, Moore left the book, selecting Neil Gaiman as his successor. Gaiman projected three story arcs; roughly one and a half saw print before Eclipse folded in 1994.

For more details, with a complete run-down of the copyright situation up to last week’s announcement, I strongly recommend this excellent series of posts (here’s an alternate link to one of the posts in the series with links to the rest in the first paragraph).

Marvel Comics got involved in matters in 2009, buying all the rights possessed by the character’s original creator, Mick Anglo. It’s taken four years to untangle the legal mess surrounding Miracleman and clear the way for reprints of the material written by Moore and Gaiman. That’s apparently now settled and Gaiman will finally be able to complete his original plans.

There was some initial confusion about what would be reprinted, as Marvel’s press releases have avoided referring to Moore by name. The reason for this is unclear, but widely assumed to be a result of Moore’s own wishes, as he’s taken his name off of his mainstream comics work in the past.

At any rate, Marvel editor and Senior Vice President of Publishing Tom Brevoort confirmed on his blog that Moore’s work would be reprinted, followed by Gaiman’s first stories, then the completion of Gaiman’s originally-projected story. 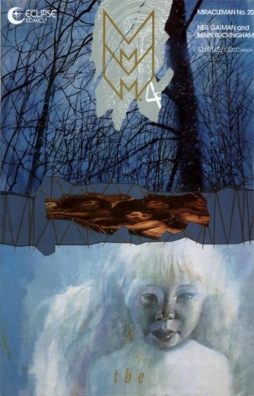 In fact, solicitations for the first two issues have recently come out. It appears that the first issue will be 64 pages and sell for $5.99 US, while the second will be 48 pages and $4.99.

According to the solicits:

A press release on Marvel’s web site suggests that the bonus material includes new art and creator interviews. Variant covers to appeal to the collectors’ market are also promised.

Also of note in that press release (which you can read here) is mention of the restoration work involved in the republication of the series:

“We’ve been working with the Miracleman artists to obtain original artwork or photostats in every instance possible, and then applying the same painstaking restoration methods and rigorous quality standards that are utilized on the Marvel Masterworks line. The Marvel Special Projects team have even been developing some new techniques specifically for this project. These Miracleman issues will receive the most advanced restoration possible to ensure the most authentic reading experience,” says SVP of Marvel Publishing David Gabriel. “The art is crisp, clear, and looks as good – if not better than the day it was published! Also, the stories are being completely relettered to meet today’s standards.” 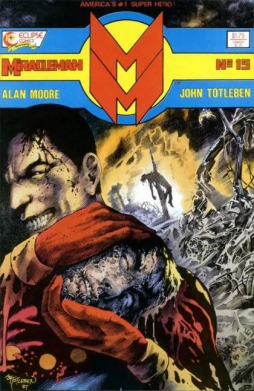 Marvel’s still actively looking for the series’ original art, some of which has been sold to collectors (see the comments in this news article for a Marvel editor reaching out to a fan who said he had some of that art).

The first chapters, done for Warrior magazine, were originally in black-and-white and coloring in comics has advanced considerably in the years since Eclipse Comics first colored them — and, for that matter, since the most recently-published issue of Miracleman, back in 1993. The mention of redone lettering is more surprising, but it is true that the original lettering varied considerably in its look over the course of the original run of the series.

Most importantly, Brevoort confirmed on his tumblr blog that there would be no editorial alteration to the content of the series. That’s not necessarily as sure a thing as you might think. Issue 15, Moore’s next-to-last issue, featured a battle between Miracleman and his archenemy that was, and likely still is, unparalleled in the level of devastation and gore depicted in a super-hero comic.

It may say something, though, that it wasn’t that issue that caused the greatest controversy on its original publication. Issue 9 graphically depicted childbirth with panels based on illustrations in a medical book.

Though most feedback was positive, the head of Diamond Comics Distributor circulated a letter urging comics retailers to demand publishers maintain some sort of decency standard; Diamond’s now the only distributor of any significant size in the North American direct sale market. The market’s changed considerably since Miracleman 9 was published in 1987, as has Diamond as a company, but it’s an interesting point to consider. 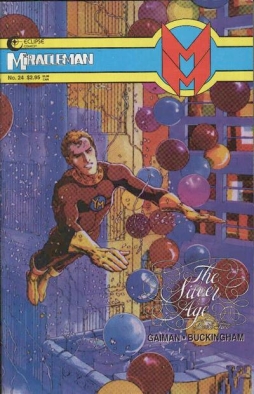 On his blog, where he responds to reader question, Brevoort’s added a few other notes about the new Miracleman books. He’s indicated that there will be a digital release at some point. He’s said that spinoffs from Warrior featuring other characters (some written by Moore) will not be reprinted, but a Miracleman story from Warrior #4 not previously reprinted by Eclipse will be. And, to some perhaps most reassuring, he has said there are “no plans for Miracleman in the MU [Marvel Universe] proper.”

Overall, all signs at this point look to Marvel doing this right. It’s a prestige project, of a sort unlike almost anything else in Marvel’s catalog. Although the company has the rights to revolutionary work by Jack Kirby and Steve Ditko, they have relatively few titles with Miracleman’s particular kind of ambition, sophistication, and accomplishment. There is a sense in which this title significantly expands their range as a publisher.

The only question is what the contemporary marketplace will make of the book. Will it live up to its reputation? The first few issues are relatively rough, by Moore’s later standards.

And have the lessons of the book been so thoroughly assimilated by later creators that the book’s impact will be muted? It’s difficult to say. In a sense, Moore’s conclusion, imagining a world completely transformed in which virtually everyone is a super-hero, seems to anticipate the current state of mainstream comics — in which crossovers are frequent, and it sometimes seems like every character in every book has powers. In another sense, its conclusion suggests a more optimistic view of the super-hero and its potential than Moore is known for, an optimism that didn’t resonate on its original publication. Maybe this time around, it’ll have more of an effect.

Fabulous! MIRCLEMAN was one of my favorite comics from the 80s, and I’m thrilled to see it return.

I wonder if it will still sparkle, nearly 30 years later? Comics have certainly moved on from where they were in 1982, when Moore revived the character.

Can’t wait to find out!

[…] start reprinting Miracleman, with new stories concluding the series eventually to come, I looked at the announcement and their stated plans (I’ve since seen the first couple of issues; good restoration work, but the extras are […]