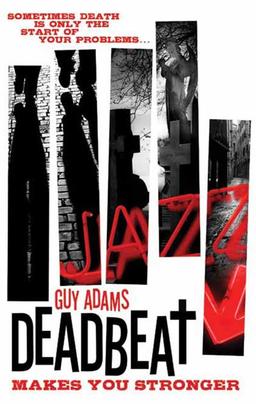 I first stumbled on the novels of Guy Adams with The World House and its sequel, Restoration, both modern fantasy from Angry Robot, and his novel of hidden laboratories, genetic engineering, and Sherlock Holmes, The Army of Dr. Moreau (August, 2012). But it was his gonzo fantasy-western, The Good The Bad and the Infernal, released in March, that really got my attention.

Guy is not exactly sitting on his hands. The sequel to his March novel, Once Upon a Time in Hell, is scheduled to arrive in December, and his companion to the hit TV series Sherlock, The Sherlock Files, shipped in July. For those of you not keeping score, that’s four books in about 18 months. Damn.

So you can imagine my surprise when my weekly trip to the bookstore turned up Deadbeat: Makes You Stronger, a paperback by Guy Adams that was released in June, 2013. This is a pretty impressive run — all the more impressive because this one sounds like the most intriguing book yet.

Max and Tom are old, old friends, once actors. Tom now owns a jazz nightclub called Deadbeat which, as well as being their source of income, is also something of an in-joke. In a dark suburban churchyard one night they see a group of men are loading a coffin into the back of a van. But, why would you be taking a full coffin away from a graveyard and, more importantly, why is the occupant still breathing?

Tom and Max are on the case. God help us…

Deadbeat was published by Titan books in June 2013. It is 289 pages, priced at $7.99 for both the paperback and digital versions. The sequel, Deadbeat: Dogs of Waugh, is scheduled to arrive June 2014.

[…] and Sherlock Holmes, The Army of Dr. Moreau, back in August, 2012, and his noir jazz club mystery Deadbeat: Makes You Stronger last October. But it was his gonzo fantasy-western, The Good The Bad and the Infernal, released […]