Have you ever become a fan of something in its earliest days and watched as it got better and better over time, until you were congratulating yourself at seeing the early greatness before everyone else caught on?

Usually it’s authors or film makers I have the pleasure of meeting on their freshman outings, and you can just tell that if you keep an eye on some them, things are going to get even more amazing as they further hone their craft.

In this particular case, it’s a hybrid of all the pop culture creativity that has been so much fun to follow.

Creating a haunted attraction from the ground up takes all the effort you can imagine — doubled. There’s the space, the permits, the theme, the detailed sets – costumes, makeup, actors, and promotion. Basically, all the components (and expense) of a stage production or an indy film with the additional elements of crowd control and liability insurance.

Fear City just kicked off its third season with a “Bloody Red Carpet” event on October 4th and its evolution has been a scream to watch.

We met co-owners Chuck Grendys (also the proprietor of the movie-building shop, Big City Sets) and Jim Lichon (an Emmy-winning set decorator for Ophra’s Harpo Studios) in 2012, as they were getting ready to launch their second season. The 40,000 sq/ft, $1 million, 32-room haunted attraction was designed and constructed by 100 experienced film, television, and theater professionals, led by Grendys and Lichon, inspired by their mutual love of scaring the snot out of people.

2011 had been a serious dash to the finish line, with permit approval arriving at the nail-biting last minute and paint still drying on the sets. That had been a “proof of concept” year and by the time we caught up with the proprietors in 2012, the kinks had more or less been worked out and Fear City was about to amp up the fear part.

Flash forward to October 2013, where we arrive at the creative sweet spot. Many of the actors are returning for their third season, the special effects are flawless, and the whole place is vibrating. It’s the tension created when all the “night things” finally have their collective groove on. 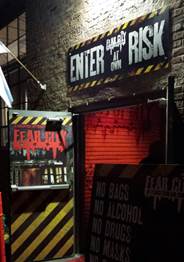 Before I joined the first group of victims to experience Fear City 2013, Grendys stepped out of the dark, a Bluetooth device in one ear and a walkie talkie bud in the other (it’s opening night after all) and answered a few quick questions:

GC: What has changed in Fear City since last season?

CG: We learned a lot from last year. We learned about more hidden passages, having actors scare you in not one spot, but three spots – a whole lot more about the flow for our actors so they can more easily get to our guests.

As far as the sets, we changed about 20% of the rooms, adding things like the “mirror room” and the “3D Day of the Dead” room. We swapped out the “peep show” set (GC: it’s where you entered the attraction – through a fairly smarmy-looking peep show), doing a 180 and making it into a store front church. (GC: where two enthusiastic evangelists now perform a cross between a prayer meeting and a voodoo ritual before sending you on your wicked way).

What about the storyline? Last year, Chicago was overrun by a virus that was causing a zombie apocalypse.

We carried over the storyline from last year. In 2012, there were survivors of the zombie infestation and now they have all gone insane, so Fear City Asylum is overrun with patients and the medical staff has lost it as well. Treatments have become tortures and the medical experiments – well, let’s not talk about those… Let’s just say the citizens are totally running amok and the streets aren’t safe.

In 2012, you had a second attraction in addition to Fear City called Hades. This year, I see posters for Fables Studios Carnivale.

During the off season, our El Train had an accident (GC: one of the most impressive sets is an operational commuter train).

While we were cleaning this up, we unearthed the long forgotten Fables Studios Carnivale that used to be on this property over a hundred years ago. In unearthing what was left of Fables, we apparently disturbed some of the original performers as well.

Chuck gives a wink, then with a crackle of tinny voices coming from both his ears, he disappeared back into the dark and I am ushered into Fear City Chicago and Fables Studios – seeing the results, firsthand, of what happens when two professional set designers, 100 movie set people, and 60+ actors have three years to rehearse.

As a veteran of more haunted attractions than I can name, Fear City stands out in its attention to detail.

When I wasn’t too busy shrieking like a little girl, I was gaping at the surroundings; each tableaux looking disturbingly concise down to the last element. The hotel lobby (with working elevator doors), the airport gate waiting area and the (blech) “clinic” were astounding on their own without the added elements of highly talented actors to make the sets come to life (or death, as it were).

At one point, when I became hopelessly lost in a clever maze of what appeared to be slaughter house cow paddocks, I made the mistake of allowing a Pennywise-like clown to wave me toward the exit.

And it… was… awesome.

If you can’t make it in person, check out Fear City’s 2013 trailer – then find an attraction near you and get into the spirit of “the season.”

What’s the best haunted attraction you’ve ever attended? Post a comment and tell us how you screamed like a Twi-hard at a One Direction concert – we’re all friends here.