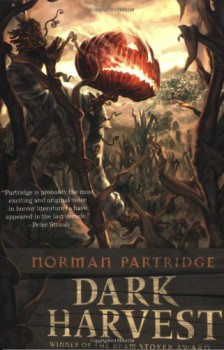 As Stephen King once observed, horror has a short shelf life. What scares us today will lose its impact tomorrow. The shock of the new will wear off, the fear of the unknown dispelled by our having come to know it.

Mary Shelley’s Frankenstein may be a literary classic, and it is still required reading in high school and college classes the world over. But when was the last time anyone was actually scared by Frankenstein’s Monster, I wonder? Or by Dracula, or any of the other classic monsters that now grace the sides of cereal boxes?

Familiar, tried-and-true monsters suffer from overexposure just as surely as vampires exposed to too much sunlight. After the umpteenth new Hollywood film, movie of the week, and YA book series, they “jump the shark,” so to speak. They lose their ability to produce chills and instead become the butt of parody or — worse — a love interest.

Until, that is, they come creeping back in an altered guise, rendered frightening and unfamiliar again by the latest horror maverick. Oh, they keep coming back, these perennial terrors. After all, there is a reason they are iconic: they have so aptly embodied so many human fears throughout the ages. We will likely be spooked — genuinely frightened — by a vampire again, hard as that is to imagine now, somewhere down the road.

In this macabre dance, venerable monsters take turns in the blacklight; their popularity waxes and wanes and waxes again, like the cycles of the moon. 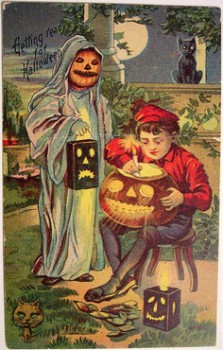 Over the past decade, the zombie has lurched its way to the center of the dance floor. As a writer for Time Magazine in 2009 noted, “Zombies are the new vampires.” But lately, they’ve been smelling a little overripe. We’ve had zombie parodies and, yes, Heaven forbid, the zombie love interest. They’re used in commercials to sell everything from Doritos potato chips to cable and cellular providers (that last a particular irony if you recall King’s 2006 novel Cell, in which a cell-phone signal turned people into zombies). They’re not quite tapped out yet (I’m still looking forward to the movie adaptation of Cell, set to star John Cusack), but soon they will have to return to the grave and lie dormant for a while, to get their strength back.

And what creature is lurking in the wings for its turn in the grisly midnight romp? Recent signs make me suspect the scarecrow — a figure of fun, a figure of terror, a figure so ubiquitous and yet without a clear, overarching mythology like his Hallowe’en-decoration pals the Witch, the Wolfman, the Vampire, the Mummy. 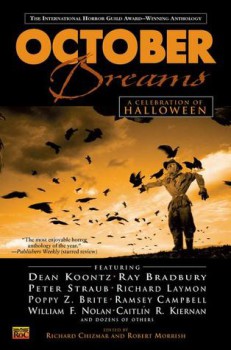 That’s, perhaps, a good thing for us storytellers and entertainers who do our level best to scare the crap out of you. It means there’s fertile, untilled ground there in that field where the hollow man on a stick stands erect — the burlap- or pumpkin-faced cypher that may, for reasons not fully explored, step down and walk in the light of a harvest moon.

How many horror anthology dust-jackets — especially October-themed ones — has his image adorned, while never fully realizing his own recognizable mythology?

Of course, scarecrows have been used as a source of horror plenty of times before. His silhouette can be spotted slinking through the pages of Bradbury and Ramsey Campbell, and he has starred in many a low-budget, indie horror film. (And for a brilliant use of the scarecrow in recent horror fiction, check out Dark Harvest by Norman Partridge, winner of the 2006 Bram Stoker Award.) But he may be creeping onto the fringes of the mainstream: recent gigs as monster-of-the-week in everything from Doctor Who to Scooby-Doo, not to mention an eponymous Syfy movie, suggest he can reliably scare up a few chills just as surely as the Scarecrow in The Wizard of Oz could stir up a few laughs. 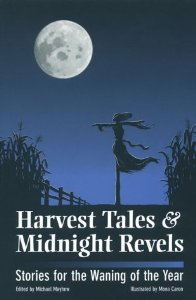 And for me the scarecrow holds a special place in the monster pantheon. He was and always will be a primal death-figure on a par with the Grim Reaper, all because of a certain evening when I was a boy. I shared this memory in my introduction to Scott Dixon’s 2010 horror-story collection, Beyond Midnight. This is a good time and place to recount it again…

Lemme tell you about the scarecrow. My first vivid impression of him, I was just a little tyke. Step on a crack, break your mother’s back. I was the last of the Cub Scout pack that evening, waiting restlessly in the Den Mom’s living room. My own mother was running late. Just enough time for me to pick up a children’s picture book off the floor and start flipping through it.

Inside was a spooky little story about a boy walking home late one evening along the cornfields. And the scarecrow starts following him.

It wasn’t a nice Wizard of Oz scarecrow. No. It was the Bogeyman.

Scarecrow, you were the scariest thing I’d ever seen. I recognized you: you were the thing in my worst nightmares, the horrible ones that a boy would do almost anything to forget.

I sat there wondering if Mom would ever come. And worse, wondering if it would matter. Mom might not be able to keep me away from the scarecrow. Not even Dad, with his muscles and his gun and his badge. Fear — not the heart-racing kind, but a sort of melancholy, a pensive awareness — settled over me. Nor did it help that I think I had a touch of fever that night.

That night, staring at that storybook (which undoubtedly was not intended to be even half as frightening as it was for me in that particular mood, at that perfect receptive moment), I think that was when it first sunk in that I would die. Knowing not just in an abstract sense, but realizing that someday this will end. The curtain will be drawn back, and I will be thrust into the Unknown. Maybe even tonight, the thought slithered across my feverish young brain. And will the scarecrow be there waiting for me?

Adults stop fearing the Bogeyman, right? Ask yourself that again, the next time you’re alone in an empty, echoing house, and you hear a noise. Or the next time you’re walking along a deserted street through a forest of shadows. Creeping around behind and beneath more prosaic terrors — sickness, loss, crime, financial ruin — is this fear of the Unknown beyond all that is or can be known.

Poe knew it well. Just re-read “The Masque of the Red Death” for the perfect blueprint of the Bogeyman. While the revelers are going about their lives, having a ball, there is one at the masquerade for whom the grotesque mask conceals something far worse. And that clock in the black-and-blood-red room is ticking inevitably toward midnight, when the ineffable truth behind the mask will be revealed.

Lovecraft knew it well. “The oldest and strongest emotion of mankind is fear,” he once wrote, “and the oldest and strongest kind of fear is fear of the unknown.” There is a reason why he is the greatest writer of the uncanny or horror tale of the twentieth century, as was Poe of the nineteenth. In the best of his tales, one gets glimpses of the scarecrow — often a cosmic scarecrow that comes from dimensions beyond human comprehension — always stalking us, even when we have pushed him far, far into the back of our minds and tried to maintain our innocent ignorance.

These monsters, in all their shapes and guises…such storytellers conjure them up to unsettle us, to get under our skin. To get us to hear, just for a moment, the ticking of that clock. 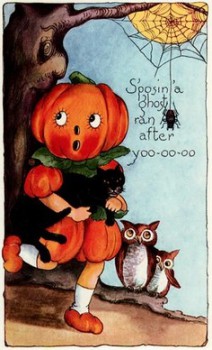 As any horror fan knows, it is a delicious thrill, this intentional inducement of gooseflesh, this purposeful attempt to get the hairs to stand up on the backs of our necks. A bit of inoculation, perhaps? Like going on one of those amusement park rides that simulates the experience of free-fall without our having to jump off a cliff? Maybe. Whatever the reason, some of us just feel the need periodically to get back in touch with those childhood night terrors.

I love this post! I think scarecrows have to be one of the most iconic Halloweeny/Harvesty images out there AND they are creepy to boot.

This post reminded me of a couple of good scarecrow or scarecrow-like movies. Are you familiar with The Dark Night of the Scarecrow? It was a 1981 made for TV horror movie and it scared the crap out of me in fifth grade! Also, the beginning of Jeepers Creepers 2 will really get your scarecrow creep on!

I like the Dark Harvest pic at the top. That book deserves to be made into a movie. It has a Hunger Games-like theme connected to Halloween with a creepy scarecrow super villain (with a twist at the end).

@McGlothlin: I do have a vague memory of Dark Night of the Scarecrow, seeing previews for it on TV. That would’ve premiered not too long after the experience I describe in the post, so if I’m recalling accurately my memories of over 30 years ago, I think I intentionally did not watch it because it reminded me too much of the terror conjured by the book on that earlier night (I was only 9 years old when it first played).

I haven’t seen the sequel to Jeepers Creepers, but about the first film I say, hands-down, the scariest one-half of a movie to come out that year (the second half fell flat, but those early scenes — being pursued by a rusty truck that looks like the jalopy from Hades, hiding from the dark figure in the claustrophobic pipe — they’ve rarely ever been better done). I always heard that Jeepers Creepers 2 was more in line with the second half of the first film, and so avoided it. If the opening scene of the sequel is as good as the first half of the original, though, I might have to check it out.

Re a Dark Harvest film, Wikipedia claims that the author is in talks about optioning it for film, but there is no citation, and with a quick Google search I couldn’t find any other information to corroborate that.

[…] Anyway, it’s October, and I was having a thought-provoking discussion with Nick (friend of this blog) about the traditional iconic monsters of Hallowe’en (the vampire, werewolf, Frankenstein’s monster, mummy, witch, ghost, and zombie) and what it is that scares us about each one. Between us, we came up with some fascinating theories (if I do say so myself!). I won’t steal his thunder here. Head on over to the Black Gate website for some delightful Hallowe’en fun! I’ll just say here that Nick has a fascinating prediction as to what monster is going to take the center of the pop culture stage as the zombie, a bit overripe, shuffles out of the spotlight. It may surprise you; but chances are, you’ve been creeped out by it at one time or another. Here’s the link: http://www.blackgate.com/2013/10/07/the-horror-oz-meets-the-scarecrow/ […]