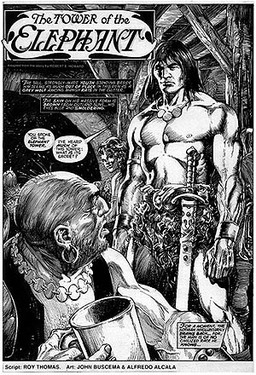 It’s New Year’s Eve, 2012. Gamer Dad and I are having a fine old time, drinking beer and wallowing in geek culture, while our families are hanging out to see in 2013 together. We’ve played Red Box D&D in the afternoon with our boys – 7 & 9. Now, it’s storytime for the boys and, going with the theme, he and I are taking it in turns to read Robert E. Howard’s The Tower of the Elephant.

Both Dads jump in.

But the lad has a point. Here’s one of the more iconic Conan yarns and yet, on the face of it, it’s an episodic heist story; pretty much what you’d get if you wrote up a D&D session…

The Tower of the Elephant (spoiler warning (well, duh!))

In Exotic City’s thieves’ tavern, local criminals exchange boasts. Mocking Thief taunts then insults Conan for (a) not knowing about the riches of Evil Magic Guy’s “Tower of the Elephant”, and (b) thinking it can be pillaged. Conan slays him.

Conan climbs the outer wall of the Tower of the Elephant. He expects to fight a guard, but discovers Uber Thief has killed him. They combine forces. Uber Thief gasses the lions, but misses one, which attacks Conan. Uber Thief is terrified, but Conan kills the lion.

Uber Thief’s special climbing gear gets them to the top of the tower, but Uber Thief then slips inside, intending to leave Conan trapped on the roof. However, a giant spider slays Uber Thief. In turn, Conan slays the spider. He’s victorious, but the tower’s odd atmosphere freaks him out.

As per the trunked one’s instructions, Conan cuts out Elephant Alien’s heart, pours the blood on the Eye, and — possibly under some kind of mojo — goes downstairs to present it to Evil Magic Guy. Though Elephant Alien is dead, he manifests through the jewel and sorcerously slays Evil Magic Guy.

The guards should prevent Conan’s escape, but Elephant Alien has smitten them Biblical fashion. Conan gets away, but without any treasure. And the tower falls down (not a cliche back then).

On the face of it, what a mess! 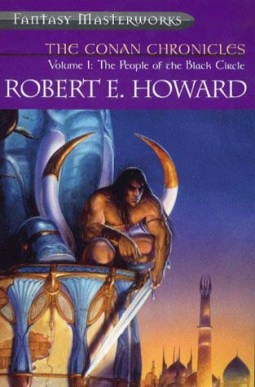 If Conan is the protagonist, how come Uber Thief does half the work? If it’s about the raid on the tower, how come we wasted all that time in the tavern, and then in chatting to Elephant Alien? If it’s about the former ersatz god, how come he only comes on stage halfway through? If Evil Magic Guy is the antagonist, why does he appear so late and why doesn’t Conan kill him? And, if it is brawling pulp, how is it that we stop off for a lyrical tale within a tale?

Except it doesn’t feel that way when you read it. What is going on?

This bugged me for years, especially as it violated the advice in most of the how-to-write books I’d read; the protagonist needs an antagonist to oppose them. Then I started looking at other stories that seemed to violate this. The most obvious example is another great 1930s work of fantasy literature, The Hobbit.

The Hobbit also feels like a roleplaying transcript, and it’s hardly a neat “Hobbit-versus-Dragon smitefest!  The dragon only takes the field near the end. Instead, Bilbo squirms, sidles, and ultimately battles through one peril after another.

However, all but the final perils are environments — wilds, mountains, forests, caves  — and their denizens — trolls, goblins (and worse), elves, spiders, and dragons. It’s like the old Clash of the Titans movie, except instead of the Gods of Olympus putting pieces on the board and setting them fighting, it’s the Courage of the Little Man (as represented by Bilbo) versus Middle Earth. Structurally, then, Middle Earth is the antagonist, which is why — I think — it always seems so vivid in our memories.

Now go back to The Tower of the Elephant. It’s a much shorter yarn, with less room to set a pattern. Is something similar going on? It can only be the theme that obsessed Robert E Howard: Barbarism (as represented by Conan) versus Civilization.

Imagine the respective thematic forces were playing a card game. This is “Crom vs Urba, the Grudge Match”.

Urba: Phew! Is there a dead cat… oh it’s you Crom. Been hanging out with your thick smelly barbs?

Crom: Hah! One of my barbs is in one of your thieves’ taverns – at least as good a thief as your little town rats.

Urba: (Pulls up the board). Right, I deploy Mocking Thief (lays out cards) and he puts a Challenge on Conan. Now let’s see if he can survive the… (drum roll) Tower of the Elephant!

Crom: I played Unerring Accuracy. Your fellow’s rudeness will trouble the world no more. Watch. Now I move Conan to this feeble tower and…

Urba: Ha! It has a High Wall, with Guards and other Sophisticated Defenses.

Crom: I play, Catlike Agility. He’s over the wall.

Urba: (Turns over a card) But my Uber Thief is there first. Now it’s a competition!

Urba: I deploy Civilised Infrastructure, which lets me deploy Lions!

Urba: Not quick enough, my Uber Thief  wastes them with Poison. My point!

Crom: But you can’t play both…

Crom: Really? That was Unerring Accuracy again, by the way.

Crom: Catlike Agility. I can play that card as often as I like, you know.

Howard famously claimed — to paraphrase — he “just sort of channeled Conan”. I’m sure he spoke the truth. But this analysis suggests that he was either lucky enough to be plugged into such resonant themes, or wise enough to be selective about what he finished or submitted. Presumably he had his reasons for all those abandoned stories.

So it seems that structurally, Howard’s The Tower of the Elephant is every bit as sophisticated as Tolkien’s The Hobbit, and — come to think of it — also as sophisticated as mainstream gems of the same era such as Hemingway’s Old Man and the Sea. Black Gate readers will not be surprised, but it would be nice if the rest of the literary world also understood this.

Now I want to see Tower of the Elephant published as an old-school TSR module complete with removable cardstock cover with maps printed in pale blue “non-photocopy” ink.

Well, its a bit later then the TSR era and lacks the blue ink, but this version might work for you…

Actually, there are nostalgic pale-blue ink maps for this scenario, which were originally printed in Footprints issue 13…

Roleplaying has its gravitational pull, doesn’t it?

Truly this is an age of miracles and wonders.

Of course, Mongoose has a color Tower of the Elephant module for their CONAN role playing game, originally published in 2005:

The first time I read The Scarlet Citadel, I was stunned by how much it read like a D&D adventure. Nearly forty years before the game was invented. Howard was amazing.

The first time I read The Scarlet Citadel, I couldn’t believe how much it resemebled a D&D adventure. Some forty years before the game was invented. Howard was great.

The story was the first Robert E Howard authored Conan story I read as a child. In the mid to late 70’s there was a resurgence of his work, and I fell in love with Conan. I have read many different authors over the years who have written for the franchise, but Howard’s original tales, are still the best.

Loved this post M Harold Page! Made me grin in glee 🙂

[…] Understanding Howard’s “The Tower of the Elephant” The Shapes of Midnight by Joseph Payne Brennan When Aliens are Delicious: Murray Leinster’s “Proxima Centauri” and the Creepy Side of Pulp SF Professor Jameson’s Space Adventures, or Zoromes Make the Happiest Cyborgs The Best One-Sentence Reviews of Manly Wade Wellman The Beast with Five Fingers by W.F. Harvey […]

When it comes to roleplaying the Tower of the Elephant, by original intent, then I think this:

Conan ventured in there with his girlfriend, not with a heroic group of roleplayers, which makes sense, as he finds out he is actually harming the cursed good guy.

As an adventure the small-group has to risk-it can be a very atmospheric and helpful in training the rogue player to learn the basics.

I liked it, and enjoyed the old NWN fan module of it.