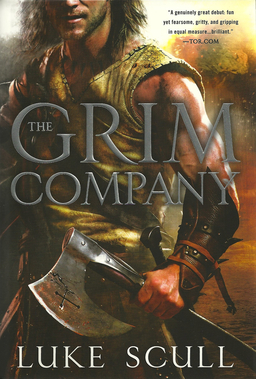 I admit I can be a little lazy when putting together these New Treasures articles. For one thing, my scanner gave up the ghost months ago and I can’t be bothered to walk aallll the way down the hall to use Alice’s. It’s usually easier to search for an image online. I’ll spend 20 minutes searching every nook and cranny of the web, trying to save the six minutes it takes to do a scan. Go figure.

Sometimes, though, the search is fruitless — as was the case with The Grim Company, the first novel from Bioware game designer Luke Scull. There were versions of the cover out there — lots of them. But most appeared to be early versions of the final cover I was holding in my hot little hands, courtesy of the publicity department of Roc Books.  Barnes & Noble, Amazon.com, Goodreads — all of them were showing the same cover. Sure, it’s very similar to the final cover, but there were subtle differences (the actual final cover is here — see if you can spot them all).

Well, I don’t have a whole lot of scruples as an entertainment blogger, but that’s one of them. At Black Gate, we try to show you the real cover. Hurray for us. So I had to troop all the way down to Alice’s office, interrupt her game of solitaire, and take six minutes to scan the cover. It’s shown at right, in all its glory (click for a bigger version). You’re welcome.

The Gods are dead. The Magelord Salazar and his magically enhanced troops, the Augmentors, crush any dissent they find in the minds of the populace. On the other side of the Broken Sea, the White Lady plots the liberation of Dorminia, with her spymistresses, the Pale Women. Demons and abominations plague the Highlands.

The world is desperately in need of heroes. But what they get instead are a ragtag band of old warriors, a crippled Halfmage, two orphans and an oddly capable manservant: the Grim Company.

The Grim Company (the opening volume in a series also titled The Grim Company) was released by Roc Books on September 3. It is 389 pages, priced at $26.95 for the hardcover, and $12.99 for the digital version.