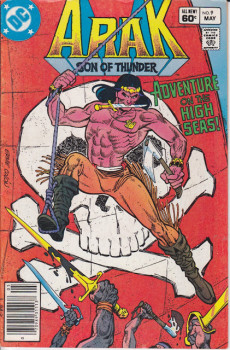 With the return of Roy Thomas to the scripting helm, Arak issue 9 has our protagonists Arak and Valda resuming their quest to rescue Malagigi from his demonic imprisonment in far-off White Cathay. After having rescued Pope Hadrian and having rid the world of one Black Pope, our stalwart heroes are set for some adventure on the high seas. It’s time for a one-off pirate tale, but one in which Thomas manages to work in Vesuvius and an encounter with the lost souls of Pompeii.

Arak is about fed up with cities: “He-No take me — I’ll be glad when we’re done with the cities of your world, and I can take to the forests again.”

But first they have to pay a visit to Neapel (modern-day Naples) to find Pope Hadrian’s friend Gallio, who can provide them passage to Byzantium.  The Holy Bishop of Rome told them that they would know Gallio by the ring he wears, “which shows two hands grasping but a single cross.”

As with every past arrival at a new city, the first signs are ominous. People are packing up and leaving the port in droves, because “there’s no longer work there for free laborers — or honest seamen!”

They soon discover the reason: Gallio’s ship is now manned mostly by slaves. When they begin inquiring down at the bay, two “lecherous merchants” immediately hone in on Valda, because, as Thomas narrates, “Alas, however, in these unenlightened days, the presence of an attractive woman on the docks usually has but one meaning for the sea-rovers of Neapel…”

Need I tell you how their pawing at her ends? With her knife at the throat of one, of course, and the other one nearly skewered like the pig he is. Their lives are spared, though, in exchange for pointing the way to Gallio’s ship.

Their arrival on the ship starts much the same. They discover a fat man mercilessly whipping a Persian slave, declaring, “By the saints, I’ll peel the hide from you, until you — ” 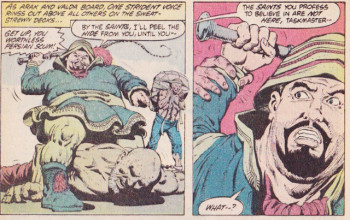 This uncivilized behavior is interrupted by Arak, who gets off a great line while disarming the fat man and flinging him to his rump: “The saints you profess to believe in are not here, taskmaster — and if they were, I suspect they’d treat you much as I do!”

His bottom and his pride bruised, the walking piece of human excrement starts spouting threats until, in the ensuing exchange, he learns who sent Arak and Valda and whom they are looking for. Now he starts sweating and becomes the very model of fawning civility.

This green-bedecked scum, who looks like a leprechaun-who-swallowed-a-hippo, ingratiatingly explains that he is Gallio’s partner and the captain of the ship. He relates the sad tale of how, on their last trip to sea, Gallio and most of the crew were slain by Saracen pirates — which is why he has been forced to take on a mostly-slave crew of “foreign captives . . . Saracens and Africans and others of, uh, strange cast of skin.” (And if your B.S. meter is spiking off the dial right now, it’s working just fine.)

They are about to set sail with another delivery of stone columns and other materials to an island where Gallio was erecting a church. Since the pirates who killed most of the crew last time out may still be skulking around, this captain, Montagu, asks Arak and Valda to accompany them to provide their free swords for protection. In exchange, they will be brought closer to the next destination in their quest.

At one point, Arak (ever curious and inquisitive, one of many ways in which he breaks the typical barbarian mold) asks where they came by all the massive stones and temple columns — “Surely, the city fathers of Neapel would not let you dismantle the old Roman buildings there!”

Montague blithely explains, “Nay! I got them from a bunch of forgotten ruins, where a volcano erupted long centuries ago, and destroyed a whole city and all its inhabitants.”

One page of advertisements later, we are on the Aegean Sea and the Saracen pirate ship is in hot pursuit. When the pirates board, they are in for more than they bargained for, obviously. Arak and Valda begin slicing and dicing them into fish food at once, but in the midst of the fray, Arak overhears the pirate captain cursing out Montagu: “You betrayed me — and you must pay! Only a portion of the bags you paid me with were filled with gold — the rest, with sand! Did you truly think to escape my wrath for long?”

Arak clashes swords with the pirate captain, delivering a mortal wound, but tries to learn more from the pirate before he expires. Too late: “Arak realizes that the eyes which stare upward are looking not into his own — but toward the unseen voice behind the stars.”

Still, he’s heard enough to know that Montagu was somehow in cahoots with the pirates.

As the Saracen ship burns and sinks into the sea, Valda notices that Arak is bleeding. “A scratch merely, Valda,” he dismissively says, unsurprisingly. Valda, though, insists that he retire to Montagu’s cabin so that she may tend to the wound. She has learned something of herbal medicine from her old mentor Malagigi, who taught her “that scratches, not cleaned, can be deadly.”

Malagigi begins to protest at being ousted from his own cabin, but quickly bites his tongue — after all, these two did just rout an entire pirate crew and send their ship to the bottom of the Aegean.

Being inside Montagu’s cabin sets up the discovery of dark secrets, of course. In this case, Valda’s hunt for clean cloth prompts her to open a chest and find a withered hand bearing Gallio’s ring. Cue Montagu and a couple of his thugs, swords drawn, barging into the room to confirm: “Gallio’s, yes! I dearly wanted that ring, you see — but my late partner would not give it to me, and it was so hard to pry off his finger.”

Arak and Valda are tossed into the hold, prompting Valda to observe, “I always seem to wind up down a hole somewhere with you, Arak.”

Taking in their surroundings, Arak notes that the majority of the material plundered from the ruins of Pompeii are not columns, but “hulking black rocks,” with strangely human form.

On a whim, he grabs up a piece of timber and cracks it against one of the rocks. The hollow rock crumbles, and a manical-looking old man bursts forth.

“What wizardry is this?” Arak declares, “A man sprouting from inside a rock — like maggots from a rotting carcass!”

The loony old fellow explains that he is Nessim, a priest of Jupiter, who concocted an immortality potion for himself just before he and the rest of his people were encased in lava by the eruption of Vesuvius. He then calls forth a dozen more people like himself, now hard as stone, but supernaturally animate.

Now the ship’s crew opens the hold to yell at Arak to stop yapping down there. Then they toss down a rope and demand that Valda come back up on deck to provide them some entertainment. And I haven’t been tallying how often the first inclination of men upon meeting Valda is to rape her, but this would be the second time this issue alone. No wonder she’s so touchy. If you think the men of Mad Men are uncouth, these Middle-Ages Mad Men need some serious workplace sensitivity training. Or certain pieces of their anatomy removed, which would probably be the most expedient deterrent to sexual harassment in those days.

Valda does shimmy up the rope, in order to provide a distraction while Nessim, undead priest of Jupiter, supernaturally conjures a sword for Arak.

While the excuses-for-humans on deck are trying to subdue Valda, their doom is suddenly upon them, in the form of a re-armed Arak and an army of walking stone corpses.

As the dead of Pompeii have their revenge on the villains who plundered their buried home (not, we learn, to build a church, but simply to decorate Montagu’s palatial house), only two are spared. The ship sinks as Arak and Valda are thrown adrift.

Arak sure gets thrown adrift a lot. If I recall correctly, this has to be the third or fourth time in the space of nine issues. By now, he’s broken St. Paul’s record for being shipwrecked.

Next issue is tantalizingly titled “The Last Centaur.”

Monster Count: (I’ve forgotten to keep up on this tally, so I’ll try to back-fill for the previous few issues)

Issue 7: 2 (giant from the catacombs; giant rat/mole thing that was once human?)

Starting last issue, Arak had a back-up story called Viking Prince, written by Robert Kanigher, with art by Jan Duursema. I haven’t been blogging this, since I’m doing Arak, but if readers are interested in the back-up story, I can start including a summary of it here.

Someone inquired about the letters page, which began running in issue 4, after the first three issues ran editorials from Thomas about the historical background of the comic. So the letters page in issue 9 has comments from readers up through issue 4. (Wow, with the Internet, feedback is so immediate. Back then, you were reading what readers thought of the comic five months earlier!) The letters printed have been uniformly appreciative (“Special thanks for the intermingling of fantasy and reality. I’ll bet this takes a lot of time and effort” is a representative response from Barbara French in Wisconsin). If anything of particular note pops out in a future letters page, I’ll be sure to note it.

You know, I really enjoy the variety of stories we’re getting in this series within the framework of an overall quest. Vampires, Vikings, a Christmas story, animate store corpses, pirates. It’s like Thomas pulled every toy out of the box and decided to play with them all at once. It is a shame that we keep getting the Valda threatened trope, but at least she handles herself well.

Out of curiosity, did you happen to notice the ratio of men-to-women letter writers? It’s not a great guide to tell you if more women were reading comic books then, but it might give a rough idea. I seem to remember more women letter writers being featured back in the books in the 70s & 80s – especially in the fantasy flavored books – but I could be wrong.

Count me as a vote for you summarizing the Viking Prince if you feel up to it. I don’t think I’ve read any stories with that character.

@Kaye: “It’s like Thomas pulled every toy out of the box and decided to play with them all at once.”

Hmm, those are just the three issues I had handy, but there doesn’t seem to be any pattern with that small sample.